On the dimly lit back patio of Moscow’s Imagine Cafe, Kamilla Crazy White is holding court. As she sips a cocktail, fawning admirers venture to her table, kissing and embracing her. But Kamilla quickly shoos them away.

“Don’t distract me. I’m doing an interview,” she says, turning back to two The Moscow Times reporters. “Now, where was I?”

Tonight, the young Russian drag queen is the belle of the ball at Moscow’s hottest “freak party.” Organisers — who insist on anonymity — have marketed the event as a festival of flamboyant costumes, underground music and free sexuality. It is a metaphorical middle-finger to Russia’s official state sponsored conservatism.

Soon enough, it is Kamilla’s turn to take the stage. Dressed in a raspberry-colored wig, a fluffy pink and purple shawl, black leggings and imposing high-heeled boots, she gyrates and lip-syncs to three Lady Gaga numbers. The crowd cheers ecstatically.

Drag — the performance art of impersonating women — has a storied history in modern Russia. But with the country’s political shift toward so-called traditional values and Christian conservatism, it now finds itself in an odd place.

Known as travesti in Russian, drag flourished in the heady days of Perestroika and the early years after the Soviet collapse. In the late 1980s, character actor Vladislav MamyshevMonro grew famous for performing surreal, feminized interpretations of Soviet leaders — including Gorbachev.

Mamyshev-Monro was inspired to take up drag by the movie Some Like it Hot, the only Marilyn Monroe film tolerated by Soviet censors. He even adopted the surname Monro as an homage to the iconic actress and performed as her. His artistry helped to push drag into the mainstream.

Other acts, often emerging from Russia’s burgeoning gay scene, also gained popularity. During the early 2000s, Birds of Paradise, a four-member drag collective, toured across Russia, and even won a contract with a cosmetics company.

The group inspired Felix Mikhailov’s 2009 film “Jolly Fellows,” the first mainstream Russian film about drag queens. The film depicts five male drag performers recounting their life stories during a road trip. It ends on a sobering note when the protagonists are confronted by violent, homophobic thugs. Their implied murder served as a stark reminder of the hostile environment in Russia. A year after the film’s release, Mamyshev-Monro was himself assaulted.

Since then, the situation has hardly improved. In 2013, Russia passed a law criminalizing so-called “gay propaganda” directed toward minors. The law had a chilling effect on the public presentation of gay people and gay culture.

The law also appears to have affected societal attitudes. When Austrian Thomas Neuwirth’s bearded drag persona, Conchita Wurst, won the Eurovision Song contest in 2014, many Russians expressed outrage. Some wrote to officials calling for Wurst to be banned from visiting the country.

For Russian conservatives, Wurst came to symbolize all that was supposedly rotten and immoral in the West. That said, other Russians were less concerned. The Eurovision star’s song shot to number one on Russia’s iTunes download chart.

The Conchita Wurst controversy went against a general trend of drag disappearing from the mainstream. In the early 2000s, you could still see drag performances on Russia’s main television channels, says Dr. Yael Demedetskaya, chairwoman of the Transgender Foundation NGO. Slowly, over the next decade, they largely disappeared from TV screens.

Russia’s prolonged economic crisis has also delivered a major blow to drag performers, whose costumes are expensive to produce and maintain. All this has meant that Russian drag has suffered as an art form.

“I used to love these shows, but the quality has fallen significantly,” Demedetskaya says.

Some performers say public tastes have changed since the adoption of the anti-gay propaganda law. Anton, a popular drag performer known as Evelina Grand onstage, says he is still invited to perform on television and before large live audiences. But the audiences have shifted.

“I had a lot more performances for the ‘straight’ public a few years ago,” he told The Moscow Times in an email. “Now 90 percent of my performances are in gay clubs.”

On Friday night, Evelina Grand and two other performers took to the stage in one such Moscow gay bar, Club Studio. Between extravagant musical numbers, they told bawdy jokes to the supportive crowd.

Spotting three “real women” in the crowd, the queens joked that “we’ll get a couple of ‘naturals’” — Russian gay slang for straight men — “in here. Just hope they don’t mistake your holes for the more glorious ones in the wall.” The crowd roared with laughter and applauded. The queens were clearly in their element.

All In A Day’s Work

This rapport between performer and audience is what initially attracted Dmitry — Kamilla Crazy White’s real-life persona — to drag.

He gave his first shows as a child, when he and his friend would don wigs and women’s clothing to perform parodies of Russian pop stars for elderly neighbors. Later, Dmitry joined a local theatre and eventually entered the Moscow Province College of Arts.

Then one day, he visited Central Station, Moscow’s oldest gay club, and watched a drag performance.

“I saw the divas and I just knew I wanted to be like them,” he says.

After taking part in several drag contests at the club — where he debuted Kamilla Crazy White — Dmitry was offered a job. Kamilla became a hostess at the club and was later invited to perform a few numbers onstage. Soon, she was managing other artists at the club.

But it hasn’t been easy. It takes several years to build up a reputation as a drag performer, and the pay at gay clubs is not astronomical. For each appearance, Kamilla often makes only 5000 rubles (roughly $85). And the work can be unstable. In November, after six years at Central Station, Dmitry stuck out on his own to seek freedom to grow as an artist.

Taking the stage at Imagine Cafe on Saturday, Kamilla announced that Saturday marked a monumental event: her seven-year anniversary in the drag world.

After so many years, Dmitry says that he and Kamilla have basically become the same person, and many people use the names interchangeably. 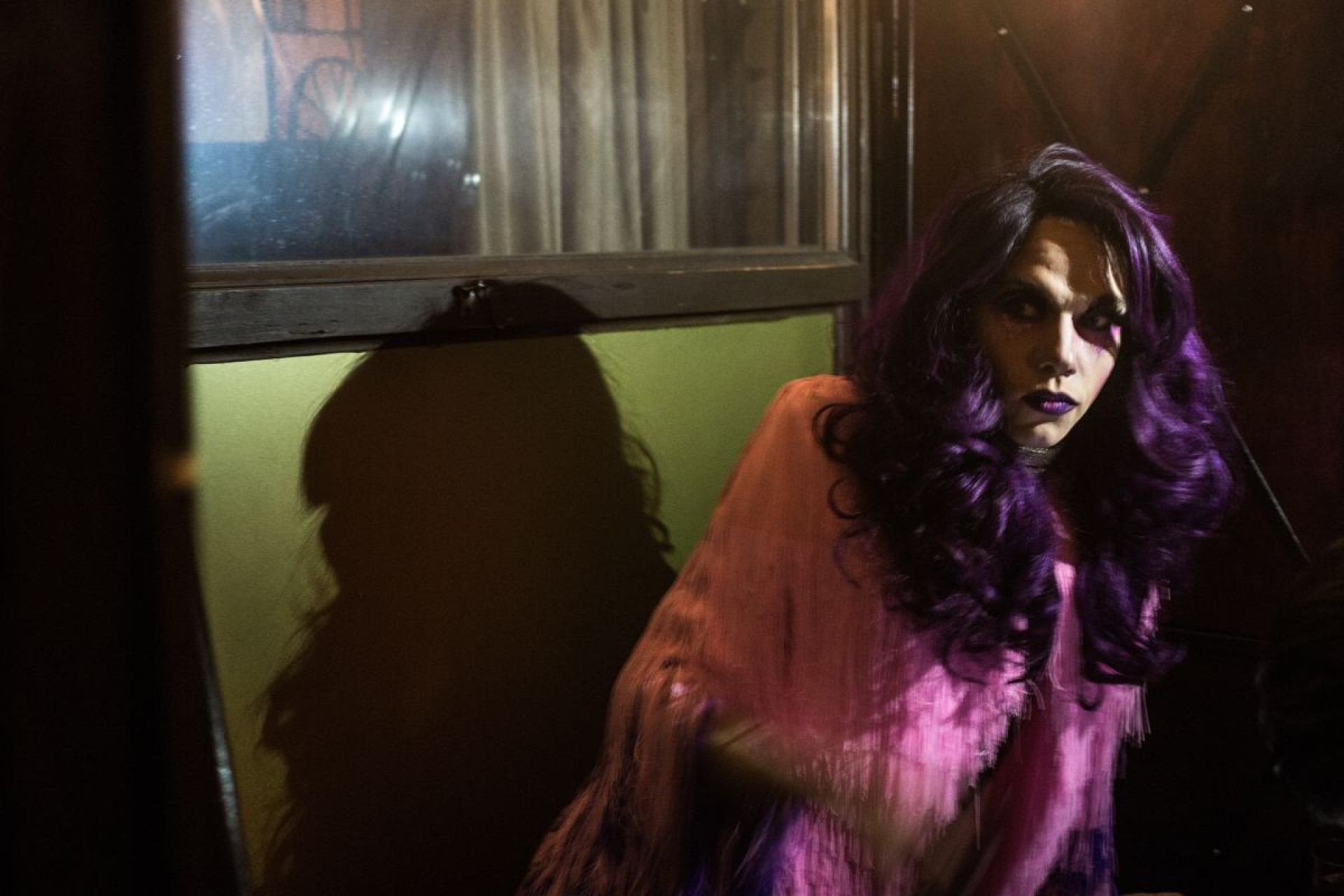 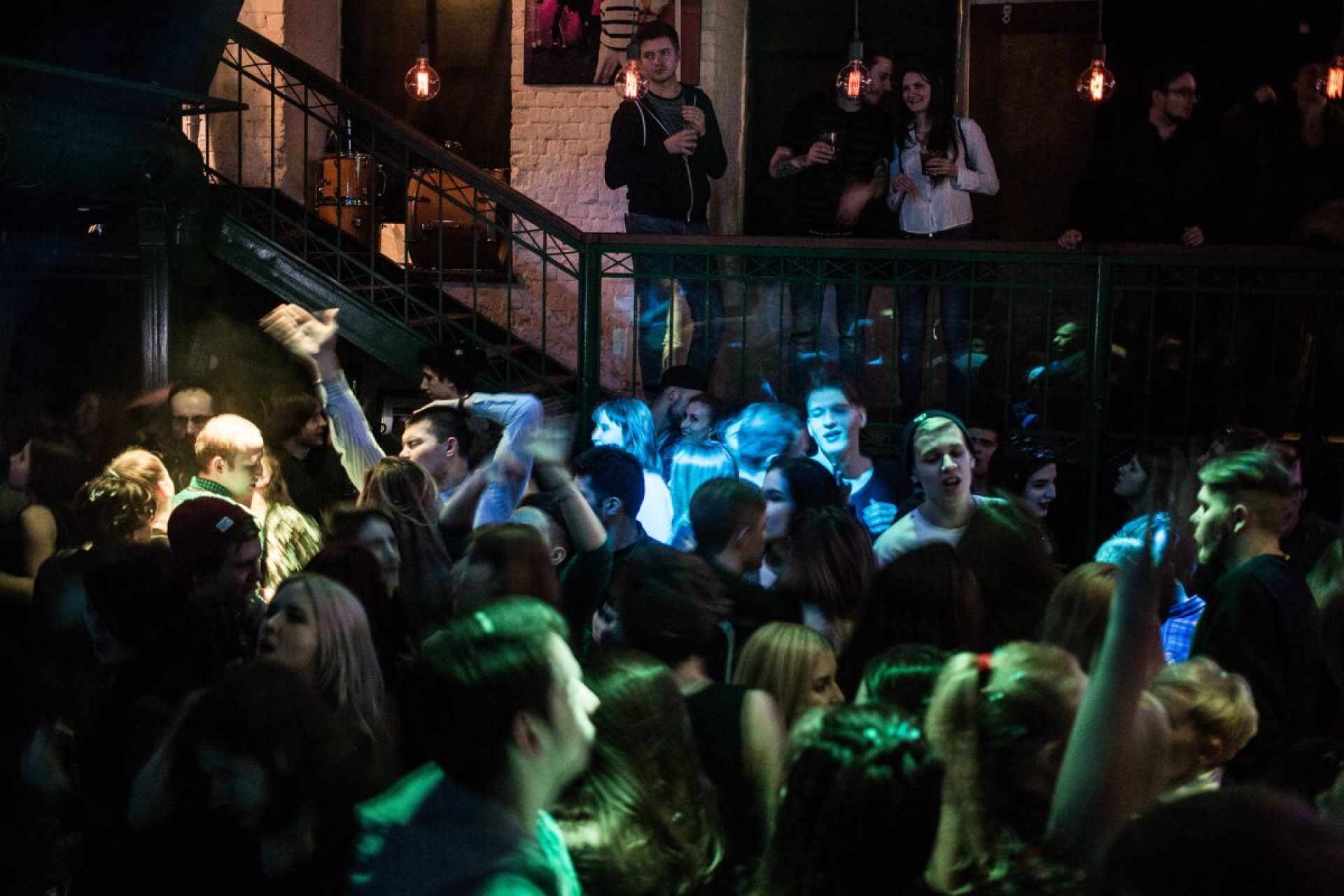 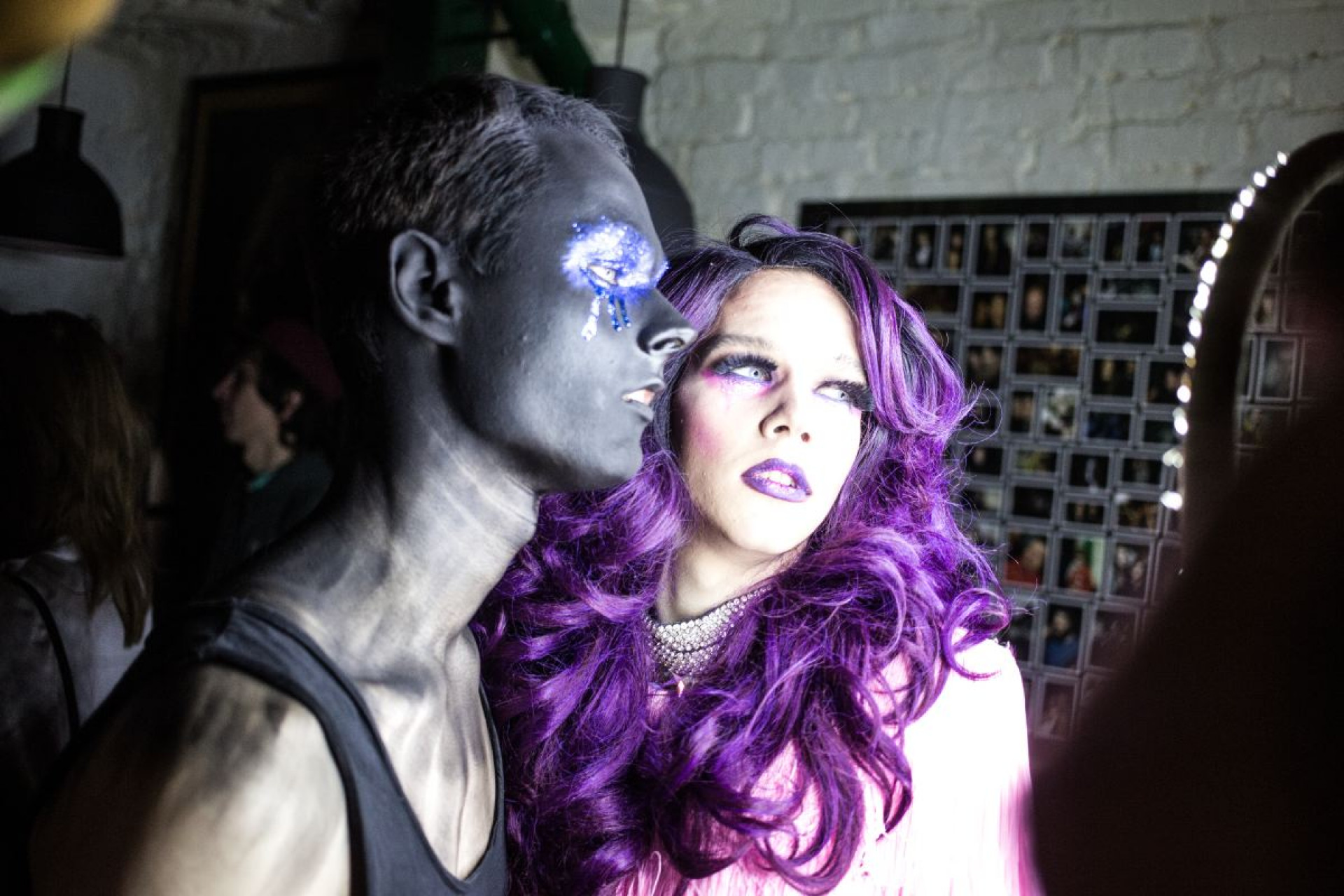 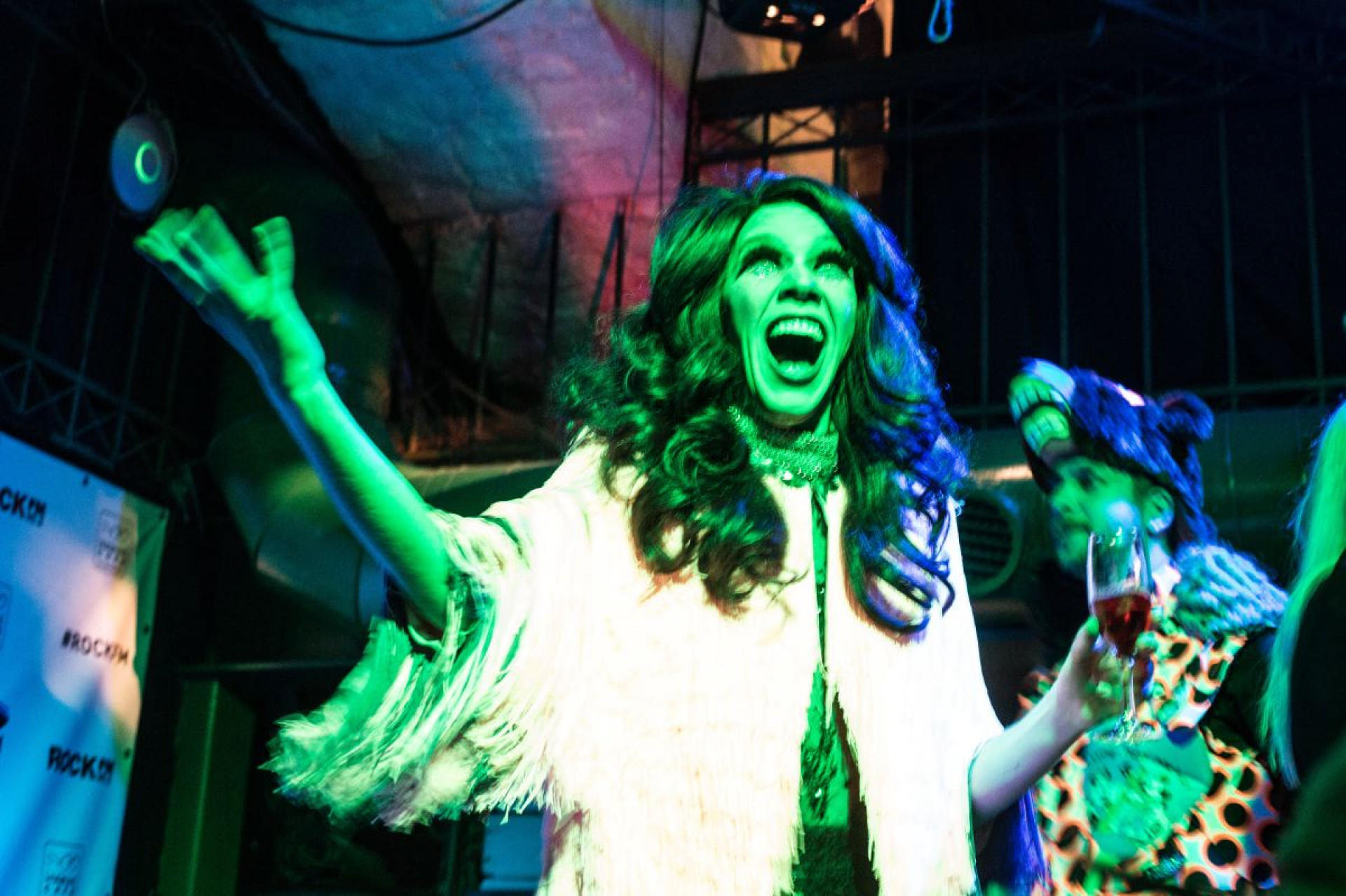 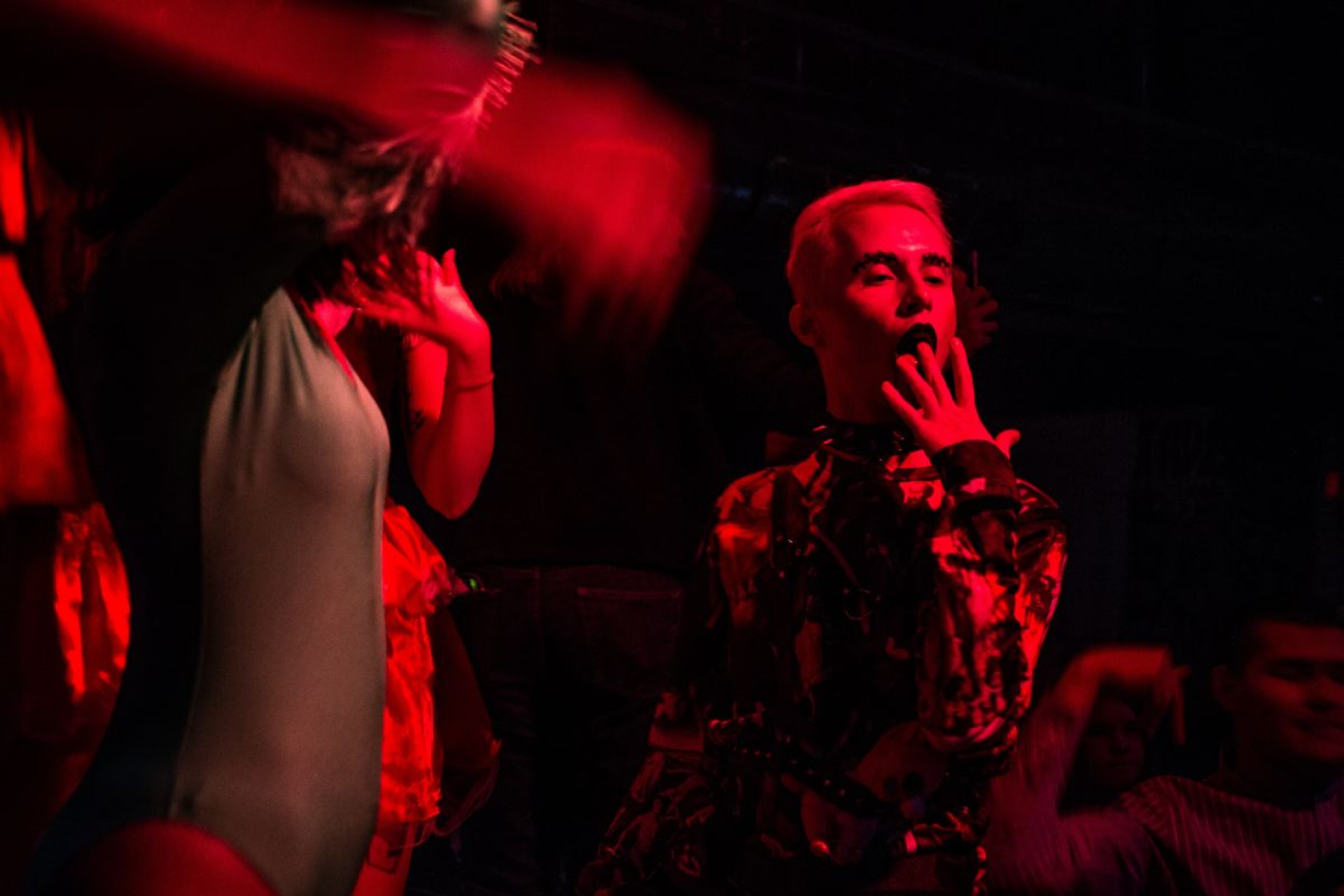 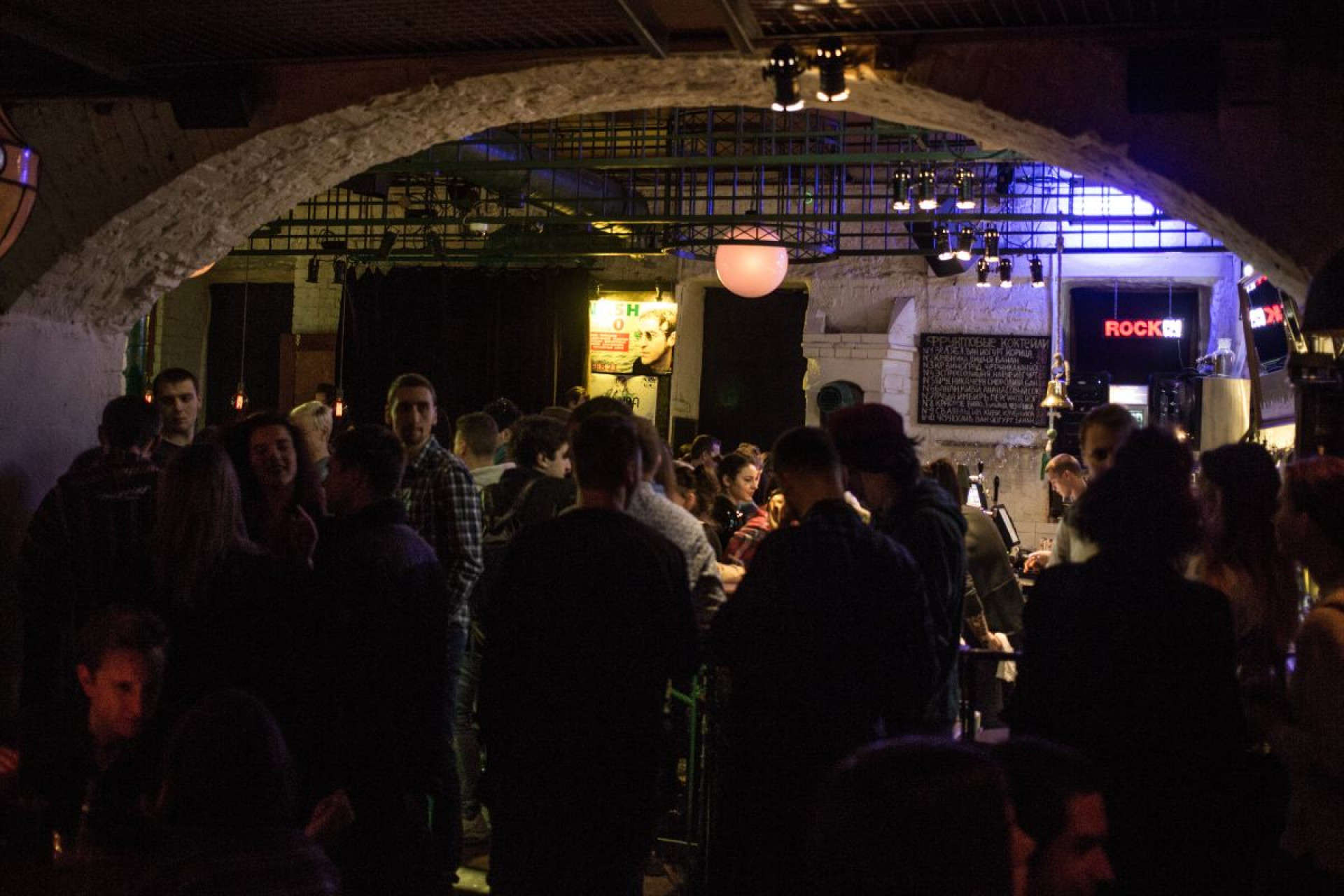 Unlike being gay or transgender, drag is not an identity in and of itself. But for many performers, their stage personas are extensions of themselves.

St. Petersburg-based Grigory Zaritovsky performs as Mona Pepperoni, “a hot Italian woman with a French accent” that Zaritovsky attributes to his inability to pronounce the Russian letter “r.”Although Mona is his artistic creation, Zaritovsky says he believes she “was always there inside me.”

Mona came to life in 2007, when Zaritovsky donned drag to help a female friend celebrate her birthday. Later, he decided to try to put the character onstage. But Zaritovsky hardly intended to become a professional.

Then, in 2011, he was fired from his job as a theater teacher at the local House of Children’s Arts. Administrators had discovered that he was gay and an LGBT activist. But this deeply unpleasant incident had one silver lining: A month later, the gay club Malevich offered Zaritovsky a job as a drag performer.

Since then, he has performed drag fulltime, and is now a regular performer at Petersburg’s Art Kafe Kabare. At times, he has even incorporated politics into his act, satirizing Vitaly Milonov, the arch-conservative St. Petersburg Duma deputy known for championing anti-gay legislation.

His humor has a dark underbelly. Fueled by Milonov’s anti-gay law, homophobic violence peaked in 2013, with the SOVA anti-extremism center recording a record 27 homophobic attacks across Russia. That same year, unidentified attackers fired guns at Moscow’s Central Station nightclub, and later released noxious gas inside the building. Attackers eventually even attempted to crash the roof down on clubgoers. Ultimately, Central Station was forced to relocate to a less central location.

But Russian drag is rarely politicized. Zaritovsky says he has tried, without success, to convince the drag community to get involved in activism. But some Russian gays also buy into negative stereotypes about LGBT activists. Many believe activists only attract negative attention from politicians and the police. “It’s easier for people to be hidden and not stick their necks out,” he says. “It’s self-defense.”

Kamilla Crazy White seems to be one of these apolitical drag artists. Before her performance, she told The Moscow Times that Russia’s anti-gay legislation wasn’t a big problem and that the country is “too cold for gay pride parades.

But like many drag artists, Kamilla is also struggling to build a career onstage in difficult economic conditions. The costs of costumes, wigs and cosmetics have all gone up, while pay has hardly increased.

“As Dmitry, I allow myself a lot less,” she says. “Dmitry always saves.”

Inside Imagine Cafe, embracing her many admirers, Kamilla is too busy to worry about money or what strangers think.

Kamilla says she traveled to the club in a taxi, dressed in full costume. On the way, other drivers honked at her and stared.

“Maybe seeing me made them happy. Or maybe they wanted to shout ‘fag’ at me,” she says with a shrug. “Either way, no harm done.”

Thanks for signing up!
Read more about: LGBT

This is at least the second time officials have unintentionally recognized a gay marriage.
free for now

Yulia Tsvetkova is waiting to stand trial for distributing pornography online, a charge which carries a jail term of between two and six years.
breaking barriers

Tatler said it hoped Natalia Maximova’s interview “will give hope to those who need it.”