The new restaurant Pipe is named after the street it's located on — Trubnaya — which comes from the word "truba" (pipe). It has a cozy and shady terrace, so it's better to come when it's sunny and enjoy some cool air. But don't despair if it's raining; there's a brightly colored room inside as well.

Pipe is ruled by two chefs, Rafael Kazumyan and Alexander Pantyukhov. Kazumyan is a MasterChef television show winner who invested his award money into a culinary course at Le Cordon Bleu, the famed Parisian cooking school. Pantyukov comes from a pub with a proper British name: Sova i topor (Owl and Axe).

All the dishes come impeccably presented, with each ingredient perfectly positioned on a plate. They look so good, they are begging to be Instagrammed. Fortunately, your taste buds won't be disappointed either.

The menu at Pipe relies on French classics, which reflect the influence of Le Cordon Bleu, but the two chefs bring their own innovative approach to the traditional cuisine. 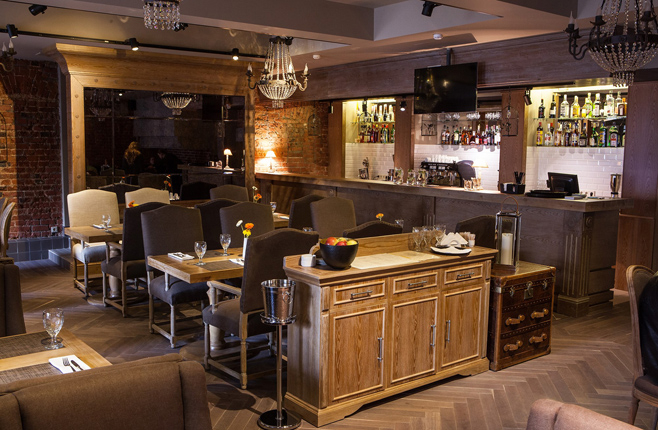 Start with bruschetta and cheese (290 rubles), which pairs well with beer or wine chosen from Pipe's carefully-curated selection of both. Continue with the excellent consommé with veal cheeks and noodles (450 rubles), which comes with bone marrow served inside of an actual bone and a grilled piece of black bread. Or try the turkey liver pâté with foie gras (390 rubles) — it's a painting on a plate: donuts of truffles and berries arranged in a semblance of an avant-garde work of art.

From the selection of main dishes, try an elaborate take on coq au vin made with a Russian breed of hen called "galan" (590 rubles). The hen is split in two pieces and carefully laid out on polenta with stewed vegetables on the side, placed to look like a whirlpool on the plate.

Finish your meal with one of the mouthwatering desserts, aptly named for their main ingredients "Apple" and "Orange" (350 rubles each): a half-apple or half-orange filled with fruit cream.