Contribute Today
By Peter Hobson
May 6, 2016

On Victory Day, May 9, last year, a giant procession took over central Moscow. Its participants held aloft placards, with faded, black and white photographs of men and women, many of them in uniform, most of them somber, unsmiling. Crowds filled Moscow's eight-lane central avenue, Tverskaya Ulitsa, for a full 3 1/2 kilometers. On the same day, in hundreds of other cities, millions more marched with their own photographs.

These were Russia's "immortal regiments," an annual homage to the generation that lost more than 20 million people in the fight against the Nazis. The portraits people held were of relatives who had lived and died during World War II.

Alongside the sense of loss, the mood everywhere was of elation and national pride. But this wasn't necessarily what its founding organizers had intended.

Four years earlier, a man called Igor Dmitriyev wrestled with his own worries over Victory Day.

As a boy, Dmitriyev would mark May 9 with his grandfather, who had fought his way to Berlin and returned home, miraculously, to push ahead with life. Each year, Dmitriyev's family would gather around the table. Sometimes they would play the accordion and sing. There were more jokes about the war than discussions of its horrors.

When his grandfather died, Dmitriyev still sought the company of the World War II generation. On Victory day, a public holiday, he and his daughter would choose a veteran among the crowds. "It may sound stupid, but we'd find a grandpa that we liked," he says.

Then the aging veterans began to disappear. Unwilling to abandon their tradition, Dmitriyev and his daughter began to pick out other pensioners and military officials. But it didn't feel right. He puzzled over the problem with friends in Tomsk, his Siberian hometown of half a million people. With fewer veterans, they thought, Victory Day had begun to lose its truth. From being an event of remembrance, it was fast becoming an official government celebration.

The friends decided it was time to bring their grandparents back. "We thought our grandfathers should march," Dmitriyev says in a gentle, serene voice. "Even if they were in our arms."

He recruited two friends working at a local television station in Tomsk, Sergei Lapenkov and Sergei Kolotovkin, to put out the word. They expected a few hundred people to come to the first immortal regiment in 2012. Six thousand showed up. 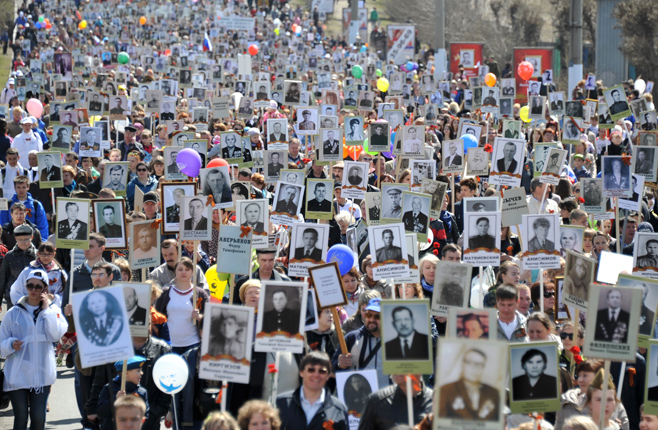 On May 9, 2015, people take part in the Immortal Regiment march in Chita, in Siberia's Zabaikalsky region.

The idea immediately proved infectious. News of the march through Tomsk spread, and people began calling in from across Russia wanting to participate or organize their own event the following year. In 2013, immortal regiments marched through 120 towns. A year later, they paraded through 500.

The founders set up a website and wrote a charter. It proclaimed that the immortal regiment would forever remain a loose collection of volunteers; that it would be non-commercial, apolitical and non-state, and never be hijacked to improve anyone's image. Its meaning was simple: Help families remember their members who endured the war.

Those high ideals were quickly put to the test.

From the very start, the organizers were approached by politicians and corporate sponsors eager to piggyback off their success. By the beginning of last year, they had begun to lose control. The main reason for this was Nikolai Zemtsov, a Communist Party deputy in Moscow's local parliament. Soon after making contact with Dmitriyev, Lapenkov and Kolotovkin in 2013, Zemtsov began to insist that the immortal regiment in Moscow work with local authorities for funding and organization.

When the Tomsk activists refused, Zemtsov went rogue and set up a copycat movement called "The Immortal Regiment of Russia."

Zemtsov did everything the original organizers had wanted to avoid. He wanted on-stage speeches to the Moscow crowds. He forged links with political movements linked to President Vladimir Putin. He canvassed for funding. He announced on television that immortal regiments would march through Donetsk and Luhansk with "portraits not only of war veterans, but those who have died now, in the battle against Ukrainian fascism."

Zemtsov wrested control of last year's march through Moscow. Afterward, his influence spread as he lobbied other cities across Russia to adopt his surrogate immortal regiment as official organizer. Given their original open proposal, there was little that the Tomsk founders could do to stop him.

Under Zemtsov's direction, the movement in many cities now bears little relation to the apolitical vision mapped out in the original charter. Organization committees have popped up across the country, some drawing state salaries. Political parties and local authorities use immortal regiment logos on their websites and in election pamphlets. Banks distribute placards with corporate logos. In schools across the country, children are tasked with making placards and sent to march in groups.

Zemtsov defends all of this. He says the regiment's founders were naive to think hundreds of marches could be run by volunteers without a budget. "The organizers' role is limited and they are needed, considering the scale of things," he says.

But the original founders are suspicious of Zemtsov's motives. One of them, Sergei Lapenkov, says the people taking control of the regiment are destroying its focus on personal family histories and on individuals. He says Zemtsov and those like him are pursuing career advancement and financial gain.

More fundamentally, he says, the takeover is about government taking control. All significant opposition parties, youth movements and NGOs have either been brought under the thumb or crushed during Putin's reign. Here was an independent movement that was expanding exponentially. "This must have seriously worried somebody at the top," says Lapenkov. "Someone thought: 'What else might these people do?'"

Lapenkov says "placard patriotism" is the inevitable result of bureaucrats getting involved in voluntary endeavours. This kind of state-engineered patriotism has been rife since the annexation of the Crimean Peninsula from Ukraine in 2014, and it reaches fever pitch during the pageantry of Victory Day.

In the postwar decades, Victory Day was much quieter, and a family event. Veterans tended to avoid speaking about the war. Lapenkov says his own grandfather would never watch war films (he lost both legs in the war, but afterward learned to dance on his prostheses). 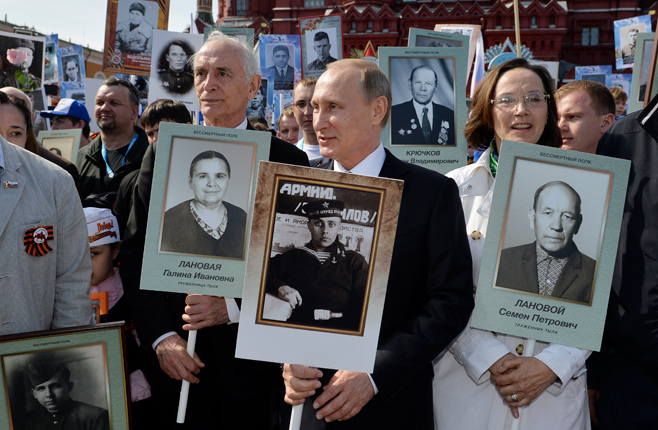 President Vladimir Putin holds a portrait of his father, war veteran Vladimir Spiridonovich Putin, while taking part in the Immortal Regiment march on Red Square on May 9, 2015.


Victory Day was usually overshadowed by May 1, Labor Day. It was in this celebration of workers that the Communist Party invested more energy. Victory Day only became a public holiday with parades after 1965, under Leonid Brezhnev, with his government made from the war generation.

After a lull following the collapse of the Soviet Union, the May 9 parade was rehabilitated in 1995, on the 50th anniversary of victory. In a demoralized, broken country, politicians quickly saw Victory Day's value as a uniting force, and made the parades an annual fixture. The final step came in 2008, when Putin reintroduced processions of tanks and intercontinental missiles across Red Square, a practice mimicked on a smaller scale in cites across the country.

Alongside the rising pomp of May 9, history itself has been moulded by the government to solidify its position. A mythologized version of war heroism has emerged, reinforced by a steady flow of glossy state-subsidized patriotic movies.

The immortal regiment project aimed to puncture that mythology and preserve real stories of personal loss. That idea survives on the founders' original website, moypolk.ru, which invites people to share their soldiers' tales. In early May, there were 319,240 entries. "The stories are remarkable, sometimes wild," says Dmitriyev. And often, they are touchingly unheroic.

One tells of a father who reported a day late to his dispatch station. For this failure, the man was placed in a "punishment battalion." These battalions were practically a death sentence — commanders used them for such tasks as running through minefields to clear them. That soldier disappeared without a trace, leaving his wife in lifelong mourning.

For some, not only the increased government control but the scale of the immortal regiment risks undermining that humanity. This year's event promises to be the biggest yet. Regiments will march not only in hundreds of Russian cities, but in dozens of countries, including the United States, Spain and Indonesia.

That worries Nikita Petrov, a historian. "When this sort of action becomes mass, it takes on a revanchist, militaristic character," he says. "It is no longer personal remembrance, but a state event."

Dmitriyev, the idea's originator, is also anxious. "Everything this is now turning into is not right," he says, "all of this organization and agreed numbers and times. Guys, stop, just stop. You're all people. You all have grandfathers who fought. Let's just remember them. Sometimes this turns into dancing on bones. Who needs it?"