It was the happiest day of Alexei Chaly's life, he says. On March 18, 2014, the "people's mayor" of Sevastopol strode through the golden doors of a lavish Kremlin hall to sign the documents that would make Russia's annexation of Crimea from Ukraine official.

He couldn't contain himself. The vaulting arches, news cameras and expensive suits of the Russian elite arrayed before him demanded hushed solemnity. But the emotion was so strong he found it hard not to laugh out loud. Clasping the hand of Russian President Vladimir Putin, he punched the air in delight.

Three weeks earlier, Chaly's seizure of administrative power in Sevastopol, the crumbling naval city of 400,000 on the Black Sea coast, had catapulted the charismatic businessman to fame and power. Russians fawned over him as the romantic revolutionary figurehead of Crimea's new dawn. He became the city's premier power broker.

But two years on, Chaly has stormed off the top table of Sevastopol's politics amid a cloud of vitriol. Almost as soon as Sevastopol joined Russia, Chaly began to fight with the city governor appointed by the Kremlin, a career naval officer named Sergei Menyailo.

The two men could not be more different. One is a bearded engineer who never wears a suit and built a prospering multinational company with yearly revenues of $300 million. The other is a vice admiral in reserve who treats commands as sacred. In the words of Georgy Chizhov, a political analyst, "Chaly is a revolutionary. Menyailo is a Russian bureaucrat."

Hidden in their conflict is the story of how Sevastopol's revolutionary hopes for life inside Russia were forced to make way for the much less glamorous reality of Kremlin rule.

All Russian revolutions start in the alps, says the stocky 54-year-old Chaly. It was from there, holidaying at an Austrian ski resort, that he watched with horror as street protests in Kiev intensified in early 2014.

Chaly had long nursed distrust in Ukraine. Backed by the West, Kiev's project to create a nation state had, he said, for two decades trampled on the Russian language, history and culture of Crimea and Sevastopol. Now, the protesters exchanging blows with police in the Ukrainian capital wanted closer ties with Europe. If they won, Chaly said in an interview, it would snuff out hopes of keeping his city in the Russian zone.

Chaly, a Russian citizen, wasn't prepared to allow that. He was laying the groundwork for a counterstrike. While Ukrainian protesters burned tires on Maidan, he was fanning his own propaganda through organizations and media in Sevastopol under his control. "We were preparing to seize power."

On Feb. 22, the protests in Kiev ousted Ukrainian President Viktor Yanukovych and pro-European forces took over. That same day, Chaly packed his skis and headed for the airport. Driving through the alps, he said he felt like Max Otto von Stierlitz, the television hero of a 1970s Soviet spy drama who returns to Nazi-controlled Berlin in 1945 — not because he was ordered to, but because he feels he must. 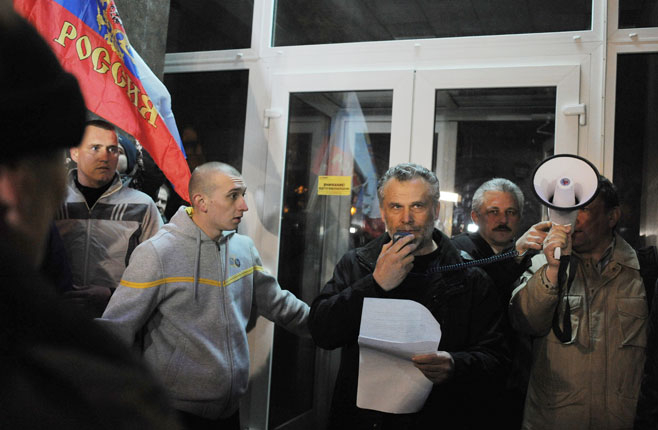 What he was contemplating was treason, and he didn't know how events would unfold. On the plane to Crimea his wife was silent. His daughter "fretted all the way home," trying to persuade him not to do anything risky.

The following day, Feb. 23, a crowd of 20,000 rallied in Sevastopol against "fascism" in Ukraine. The atmosphere was electric. Informants within the local government fed Chaly updates. He thought they were not going far enough. With a group of allies, he decided to have the crowd declare him "people's mayor," and give him de facto control of the town.

An ally of Chaly's, Yekaterina Altabayeva, later said: "There are times when history thickens in a particular person. It thickened in him, and he understood it perfectly." It took Russian authorities another week to arrive on the scene in Sevastopol, Chaly says. During that time, local militias seized control of the peninsula.

When the takeover began, Sergei Menyailo had been out of town for years.

The dark-skinned, wiry chain-smoker from the mountains of the North Caucasus had from 2009-11 been vice admiral of the Russian Black Sea Fleet, based in Sevastopol's deep, dagger-shaped bay.

Like Chaly, the 55-year-old Menyailo was a patriot. He was also one with a deep, conspiratorial mistrust of the West. When he saw the uprising begin, he boarded a boat to Crimea. He arrived on Feb. 24 and says he helped the militias taking control of the region's infrastructure and negotiated with Ukrainian servicemen holed up in their bases, unsure of what to do.

Chaly hardly knew Menyailo. But the annexation threw them together. Chaly didn't want to deal with the nitty-gritty of administration. He wanted to work on strategy. Already on March 18, after punching the air, he handed the beginnings of a city development plan to Putin. He sought someone else for the job of administrator.

Chaly told The Moscow Times that Menyailo was suggested by Oleg Belaventsev, a naval officer who had been appointed presidential envoy to Crimea by Putin. After a day spent picking Menyailo's brains, Chaly decided they could work together.

It quickly became clear that they couldn't.

According to Chaly, becoming governor immediately went to Menyailo's head. In August 2015, Chaly exploded. He published a video message to the people of Sevastopol. In it, he said that thanks to his mistake, "people have come to power who have a rare combination of qualities: incompetence and arrogance." He said he had tried to correct his error, but had been "betrayed" by people close to him.

Under pressure from Moscow, they swept their dispute under the carpet. Chaly was elected to the local parliament in the fall. He took up the role of speaker, and the assembly rubber-stamped Menyailo's appointment as governor.

Menyailo had promised to support Chaly's strategic plan, which promised "breakthrough development" for the city by encouraging private enterprise and investment. As speaker, Chaly intended to monitor its implementation. 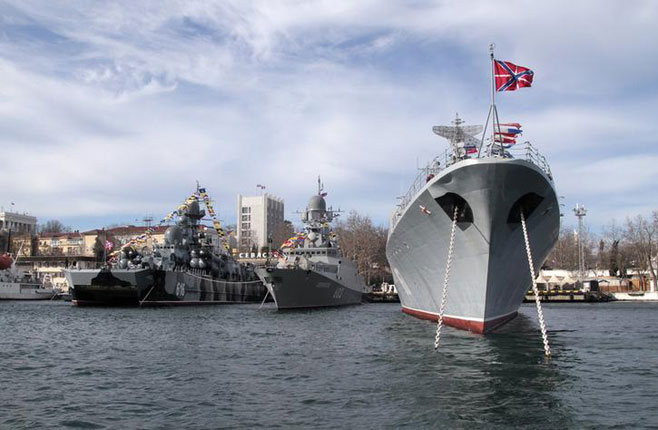 
But the cease-fire failed. "Menyailo publicly supported [Chaly's] plan," says Igor Ryabov, who heads an expert group that advises the Crimean government in Simferopol. "But in fact he sabotaged it." It was replaced, Chaly says, with nothing.

On every front they seemed to clash. Menyailo tried to push through legislation to nationalize businesses in Sevastopol, grant land to special projects and allow building on protected land and in areas of natural beauty — all of which was fiercely resisted by Chaly in the local parliament.

Chaly saw in Menyailo — who spent 38 years in the navy — the dead hand of centralized bureaucracy and the rigidness of the armed services: Menyailo is accustomed to waiting for orders from above, says Chaly. "He sees only the military management style: There's the commander and the subordinates."

Menyailo himself told prominent Russian journalist Vladimir Pozner in a television interview in March, "I'm for a harsh power vertical." Unlike Chaly, who is prone to comments such as "the truth is born out of argument," and "I will not be silent," Menyailo has a deep mistrust of democratic institutions.

"I am wary of people who put themselves up for election, people who want something" he told the Vedomosti newspaper in April. "When I was serving and I was told to go somewhere, I always answered 'Yes, sir' and went."

Menyailo has consistently rebutted Chaly's outbursts, calling them "emotional" and claiming not to understand the source of his complaints. Pressed for an explanation, he has said he sees in Chaly the same control-freak tendencies and hunger for power that Chaly sees in him.

Their friction spilled into a fight for influence that extended through last year. Chaly sought to control or destroy Menyailo's administration through public statements and behind the scene maneuvers; Menyailo meanwhile sought to limit Chaly's influence.

Chaly's support base in the city legislature began to shrink, from more than 20 of the 24 members to only 13. Chaly blames this on pressure from the governor's office, which "frightened some, bought others." However, one local deputy, Boris Kolesnikov, told The Moscow Times that Chaly was simply determined to obstruct the work of the legislative chamber.

Chaly's shenanigans gradually lost him support in Moscow as Menyailo's grew, says Crimean political analyst Alexander Formanchuk. Finally, at the end of December, Chaly told the city parliament that Menyailo's government had achieved nothing more than to destroy hopes of positive change, and he would resign as speaker. Last month, he stepped down. 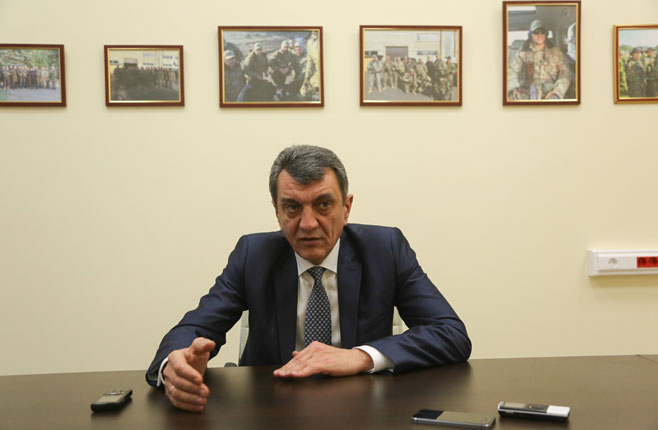 He should have seen it coming, says analyst Chizhov. "Fighting to join Russia, Chaly didn't understand that people like him aren't really in demand here," he said. "His ideas about life pretty quickly collided with the Russian reality."

A Russian official is not supposed show dissatisfaction with what's going on, Chizhov continues, which is "difficult" for anyone used to competitive business: "His type [of person] is doomed to defeat in today's Russia."

If Chaly has been disappointed by developments since March 2014, the city has also been disillusioned.

Russia was meant to be the answer to Sevastopol's problems. People expected a growth spurt after joining Russia. But it hasn't happened. Western sanctions on the peninsula and its unclear legal status mean Sevastopol is struggling to attract investment into its tourism or private sectors. Whether due to Menyailo's incompetence or the deadlock with Chaly, local authorities have largely failed to act. The average monthly income in Sevastopol last year was around 23,000 rubles ($330), according to official statistics.

"The city has gone downhill," says Inna Kireyeva, a local journalist. She says that since the annexation, the city has become dirtier and the number of potholes has increased, while Menyailo's government often ignores complaints.

Sevastopol, the scene of two sieges that are legendary in Russian military history, remains patriotic and pro-Russian. But, "right now there is a high level of hatred toward the governor," says Chaly. Kireyeva agrees: "Negativity is building. People think something might blow up."

That instability simply underlines the mismatch between Chaly and the system of which he is now part. Chaly has said he has no intention of returning to street politics in Sevastopol, at least until Menyailo is gone. But he also suggested that he had the power to again bring people out in popular protest.

That power cuts against every instinct in the Russian political system. Chaly may be comfortable with street protest, but the Kremlin has a deep fear of it.