This spring Saxon + Parole launched a P.I.G. night — an all-you-can-eat feast for which you must book in advance. A ticket costs 2,900 rubles and is worth every kopek.

Both restaurants pride themselves on serving the best contemporary American cuisine. P.I.G. nights first started in New York, and now a Moscow version has been introduced by local chef Alexander Proshenkov.

Several of the dishes were Mexican-inspired. The first course consisted of several snacks, the most noteworthy being devilled eggs with jalapeno paste and delicious corn salad with quinoa and sweet pepper. Pickled vegetables, including daikon and fennel, were also served. 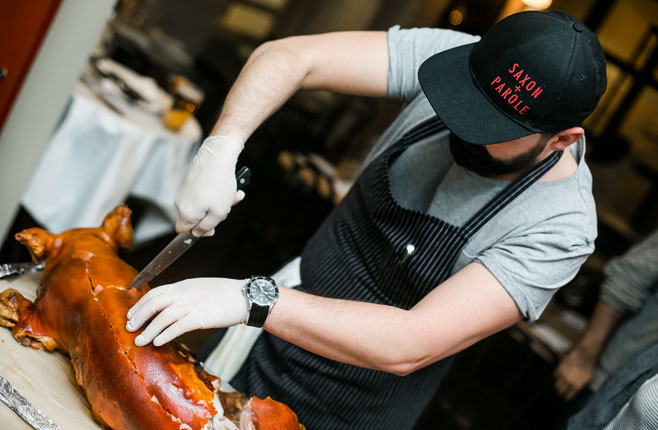 The night's main event was Steve, a suckling pig born and raised in central Russia.

The second course also had a Mexican flavor: baked pepper stuffed with chorizo and mozzarella, served with Brussels sprouts cooked with chili caramel, which were simply to die for.

There were unlimited drinks to go with the food, including Hoegaarden beer and two whisky-based cocktails, as well as whisky — 12-year-old Singleton. The whisky ran out toward the end of the night, but there was a steady flow of beer.

Then the event's namesake, the suckling pig, was brought out and carved up. The chef informed us that his name was Steve and that he was born and raised on a farm in Central Russia. After a happy, albeit short, life, the piglet was cooked according to a recipe by Brad Farmerie, executive chef of Saxon + Parole New York. The suckling pig was very tender, with sweet, crispy skin. It was served with grilled leeks and green onions, romesco and chimichurri sauces.

The desserts were churros with chocolate and vanilla sauces and Saxon + Parole's trademark whisky ice cream.

The next P.I.G. night will be April 26. The menu may differ slightly as Brussels sprouts go out of season, but a suckling pig will be served. Order in advance as seating is limited!