Situated at the foot of Hotel Ukraina with a view across the river to the Russian White House, Erwin has reopened with a new concept and an extended name "RekaMoreOkean" (River, Sea, Ocean). The restaurant is out to prove that despite Moscow's landlocked location, the capital is punching above its weight when it comes to fresh and flavorsome seafood.

Erwin's facelift is the latest venture of illustrious restaurateur Alexander Rappoport, a man whose list of previous projects reads like who's who of high-end Moscow dining. Talented Yana Pershina, formerly a chef at Novikov's GQ Bar, heads up the kitchen. Pass two heavies, an enormous mythical seahorse sculpture and an army of glittering hostesses to enter the dining room. So far, so Moscow.

In the main room, a pillar surrounded by a shoal of free-hanging metal fish and a statue of Poseidon in swimming trunks battle for your attention alongside a mountainous podium displaying Erwin's choicest seafood. Noble langoustines, prawns of all shapes and sizes and an enormous crab nestle abed a mound of ice, replenished on an hourly basis by members of the waitstaff. 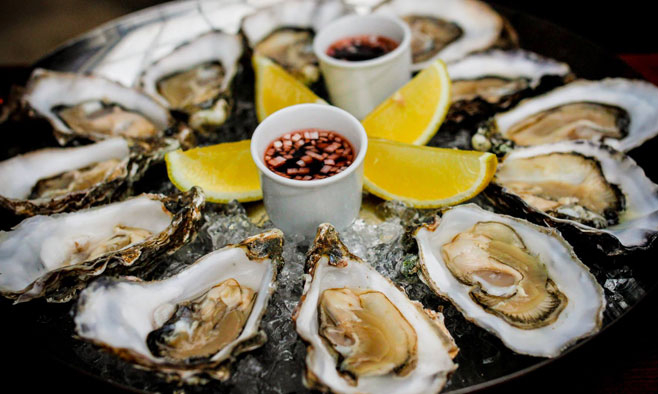 You can forgive Erwin its ostentation when the kitchen takes its seafood so seriously. The restaurant sources 90 percent of its produce from Russian seas, lakes and rivers, with most of the remainder coming from Japan.

Start with stroganina, the Russian version of sashimi or ceviche made from sterlet, a type of Eurasian sturgeon, omul from lake Baikal or shellfish from Murmansk. The thinly sliced frozen fish is delicately and artistically presented and the freezing process allows the fish to retain a wonderful depth of flavor. A caviar bar offers whitefish, salmon and sturgeon caviar from reasonable to eye-watering prices. Alternatively, order Kamchatka crab and langoustines from the "Crab, Crayfish, Prawn" menu.

Mains are divided between "River" or "Sea" depending on their provenance. Try the parchment-wrapped dorado with roasted vegetables or plaice from the Caspian Sea served with brussels sprouts. While an extensive wine list and a decadent dessert menu complement your meal, it's clear that seafood is the star of the show.

A new permanent exhibition has opened at the Worker and Collective Farm Girl Center dedicated to the construction and history of the monument towering...
news