After a career of exciting and far-flung postings — from Brezhnev's Soviet Union to Saddam Hussein's Iraq — Irish Ambassador Adrian McDaid never expected he would wind up back in Russia. Repeat postings are rare in the Irish diplomatic service, he says; and, besides, the Moscow of the early 1980s was hardly a place to which many people felt an urge to return.

"The city has certainly become brighter these days," he says. "In the 1980s, it was all gray: no bright advertisements and no consumer goods." There were very few private cars on the road, so at least there were fewer traffic jams. But it was difficult for staff at the embassy to obtain even basic foodstuffs — they imported almost everything from Finland and Denmark.

"One thing that hasn't changed over all these years is my attitude to Russian grammar," he jokes. "I didn't like it in 1981, and I don't like it now."

The Irish Embassy on Grokholsky Pereulok, northern Moscow, has grown since McDaid's time as consular officer. It is now attached to the largest Irish visa office in the world, which in 2014 processed 17,500 visas. The Irish community in Russia has also increased exponentially: from a handful of students in the 1980s to the high hundreds today.

But McDaid's second stint back at the embassy has also coincided with the most difficult period in relations between Russia and the West of any time since the Cold War.

Events such as this week's Irish Week, which has grown out of the Moscow St. Patrick's Day parade, first held in 1992, are examples of communication and dialogue fostered with local authorities. The ambassador described Mayor Sergei Sobyanin's office as being "very positive" about the embassy's plans for the celebration.

The week of events includes a film festival, live music, comedy, traditional dance and the much-loved parade. And in a repeat of last year, parts of Moscow's most central street Tverskaya Ulitsa will be "greened," or illuminated in green light, in tandem with a similar tradition practiced in major world capitals. "We're hoping to green Red Square next year, but we have to take these things one step at a time," McDaid says.

St. Patrick's Day celebrations today are a far cry from what they were in in the Soviet Union. Back then, embassy staff held small receptions for friends, and attended larger celebrations at the U.S. Embassy. Not so today. Every March 17, the Irish Embassy bursts with activity, and this year they will even host two separate events so that everyone who wants to will have a chance to toast Ireland's national saint.

This year's event has particular significance since it marks the centenary of the 1916 Easter Rising, the unsuccessful uprising in Dublin against British rule that sparked Ireland's War of Independence. A number of the films included in the film festival program will deal with this theme.

The ambassador himself was born in Derry, Northern Ireland, a city that has seen its fair share of inter-ethnic conflict. McDaid was 15 years old in January 1972, aka "Bloody Sunday," when British soldiers opened fire on unarmed nationalist protestors, killing 14. The events were the cause of much anger in that nationalist community over the ensuing years. It was only in 2014 that the British finally accepted responsibility, with Prime Minister David Cameron admitting in Westminster that the killings were "unjustified and unjustifiable."

Perhaps shaped by these childhood events, McDaid takes a strong line on violence in Ukraine, saying that he has been "horrified" by the scale of bloodshed in the country. He also says that Ireland "is entirely supportive of the EU's position [on Russia]," and will insist on the full implementation of the Minsk agreement: "Sanctions may be scaled up or scaled down depending on commitments being fulfilled."

The ambassador stresses that one of independent Ireland's founding principles was the right to "independently form foreign policy, without external pressure or threat of force." "So we cannot deny that right to any country, including Ukraine," he says

McDaid does not believe there is military solution in Ukraine, and can only be ended through a political framework. "Violence is not a way forward and the spiral of violence must be stopped," he says. Comparing the situation in Ukraine to that of Northern Ireland, he stresses the importance of respecting the rights of minorities.

"It can often become a 'them and us' situation and that's never helpful," he says. 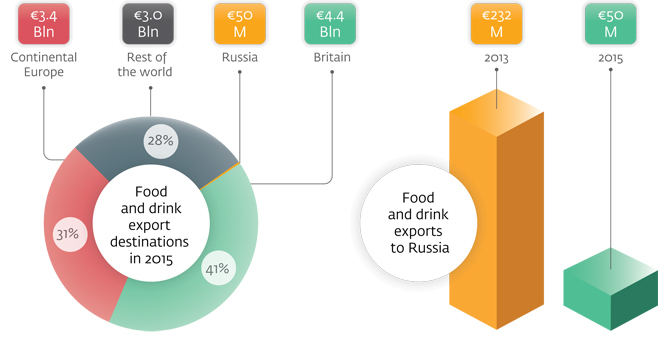 Source: Ireland's Department of Agriculture, Food and the Marine

McDaid is frank about the negative effect that sanctions have had on the once strong economic relationship between the two countries.

The volume of Irish exports to Russia has plummeted since Russia introduced counter-sanctions in 2014, banning Ireland's most lucrative exports, such as beef and dairy products. Ireland's agri-food exports to Russia, which in 2013 were worth €235 million ($260 million), crashed to €50 million ($55.4 million) by 2015.

Though Ireland's agri-food exports globally have experienced growth in recent years, particularly in China and the Middle East, Russia now makes up only 0.46 percent of Irish agri-food exports. The crash in oil prices and the falling value of the ruble has made many Irish products still available in Russia prohibitively expensive, McDaid says.

That said, Bord Bia (the Irish food board) maintains an office in Moscow and continues to promote Irish food and drink products that are not included in the ban, such as prepared foods, live-breeding animals, beverages, confectionary and alcohol.

A number of Irish products, particularly craft beers, whiskeys, ciders and cream liqueurs are still successful on the Russian market, and work is being done to continue to promote these.

Despite the challenges, the amiable McDaid says he's happy to be back in Moscow. He enjoys spending time at the Tretyakov Gallery, which he says has become much more "user-friendly" since the last time he visited in the 1980s. He likes traveling and in 1982 he traveled on the Trans-Siberian Railroad to China. Which is probably just as well, since apart from Russia he now represents Ireland in all five Central Asian republics. Just recently he presented his credentials to Tajik President Emomali Rahmon in Dushanbe.

When not traveling, McDaid relaxes by playing chess. During his previous spell in Moscow, he played competitively, and was a member of the Soviet Union's famous Central Chess Club. "They took chess very seriously then, games would take hours and hours and they would often come back the next day to finish," he says.

McDaid represented Ireland in an international chess competition in the early 1980s, before his posting to the Soviet Union. "Some of the ambassadors here in Moscow are chess players, so I'm hoping we can all get together for a game soon," he says.

Patience, tactics and constant analysis — the bedrock to chess — are likely to continue to form the basis of Russian diplomacy too.

Pour the Guinness, pull out your green top hat and practice saying "Ah, it'll be grand." That's right, Irish Week is upon us, and Moscow is bursting...
russia's response