Huffing and puffing, half a dozen heavyset men in scratched helmets and battered protective gear sprint around, shouting buzzwords in heavily accented English. A thin, cleancut man in his early 20s stands out from the crowd. With an arm gesture, he stops play, takes hold of one of the biggest men, and begins to head-butt his chest. "Set!" he shouts — this causes the rest of the men to crouch down — "Now grab your opponent, smash him with your mask … and HIT!"

The men bulldoze into each other. Some of them bounce off each other, some fall down. The coach is pleased, nods his head, and the game continues.

Keary Iarussi, 23, is assistant coach of the "Moscow Spartans," one of five American football teams based in Moscow. A former U.S. high school football player, Keary is the only American coach working full-time in the Russian game.

"It's wrong to compare the two countries' games," says Keary when we talk once the training session is over. "Football in the United States is 100 percent professional. Here it is 100 percent amateur."

It doesn't take an expert to notice the differences: the speed of play, tactical simplicity and the physical fitness of players. Keary enjoys sharing his football knowledge. "The stocky guys are o-linemen, and you have to be heavy for that — I was fat myself when I was playing," he says.

The biggest difference between football in the United States and Russia is the game speed, he says. In Russia it's much slower due to a lack of strategic and tactical skills. "All this has nothing to do with players' attitude — they're very professional and enthusiastic" Keary adds.

Keary joined the team last November and has worked hard to instruct the players. He speaks good Russian, having studied it at university, but admits the language barrier sometimes interferes with communication. 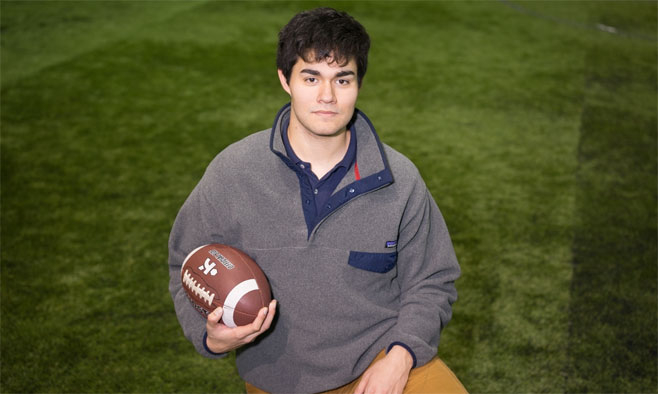 Keary Iarussi is working as the assistant coach of the "Moscow Spartans" while studying at Moscow's Higher School of Economics. He was a high school football player and wanted to remain involved in the sport.

"The players here have got their own slang, mixing English and Russian words, so we sometimes barely understand each other," Keary says. "When I say, for instance, "pull" they just stare at me, blank-eyed."

When asked why he decided to coach the team, Keary says he "just loves the game," and does not intend to quit the game while he's in Russia. He has been studying at Moscow's Higher School of Economics since November, and plans to stay in the country for several years.

A gray-haired man passes to Keary, and shakes his hand. "How are my lads today?"

Alexei Geets is head coach of the Spartans. A former track and field athlete, he started his American football career in 1990. At the start, few knew what they were doing, he says. There was a deficit of specialized equipment, so players made do with whatever they could find: motorcycle helmets and hockey protective gear were popular stop-gaps.

The following four years were the best for American football in Russia. "Businessmen appeared with lots of fast money to burn, and they could afford sponsoring a team," says Geets. But boom soon turned to bust, and the sport has survived without substantial sponsors or government support since 1994.

Though the Russian game is unashamedly amateur, there have been notable successes for the national team. In 2002 Russia won a gold medal at the European American Football Championship, and in 2003 earned third place. These were the last victories on the international level, but American football in Russia has since continued to evolve at the club level.

There are 20 teams expected to compete in 2016 in the Federation of American Football, the top level of competition in Russia. A further dozen or so teams train at the lower levels.

The main problem for the sport today has not changed from 15 years ago — a lack of cash. Playing field hire, medical supplies, kit costs, balls, and other operational expenses all add up. On average, the cost of running an American football team in Russia is 100,000 rubles ($1,300) a month. Even when sponsors are found, they rarely cover all of the costs; when the Moscow Spartans benefited from one, it covered no more than 10 percent of their yearly expenses. 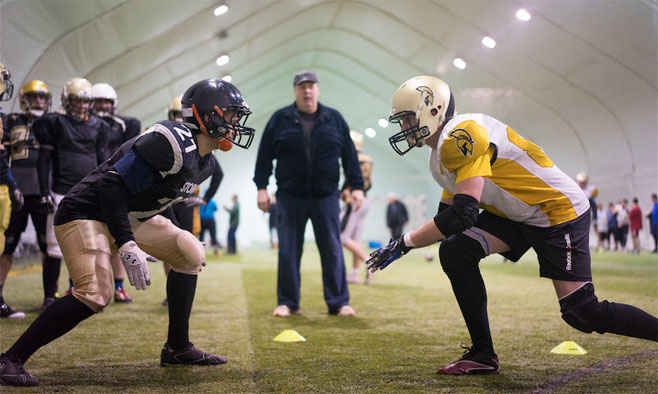 The Moscow Spartans practice three times a week during the off-season on a soccer field.

As a result, the sport is almost entirely sponsored by the players themselves. Geets says he is not optimistic about the situation changing soon. "American football is not an Olympic sport," he says. "The bureaucrats will only spend money when they know it might win them a medal."

And in recent years, another problem has emerged — politics.

In September 2013, an unusual letter appeared in the Russian media.

"Moscow isn't the right place for American cruelty," ran the headline. It continued: "Russia has always battled aggression and expansion from the West … We don't want our children to be playing a game based on fanatical fury and destruction … It's not too late to stop our patriotic, nation-oriented citizens turning into typical Americanized consumers, with their advanced avaricious reflexes and pointless aggression."

The letter was written in response to the decision to stage a semi-final of Russia's American football championship in one of Moscow's major stadiums. Some suspect that the letter was inspired by a soccer team that wanted to use the stadium instead. But it coincided with a time of general demonization of the United States in Russian society as a whole.

According to recent figures from the independent Levada Center pollster, some 73 percent of Russians now see the United States as a "hostile state." The shift in opinion has had an effect on various fields of Russian life, and the American football community is no exception.

Keary says he has experienced the change in the attitude firsthand. Even in the American football community, people have become much more politicized, he says. 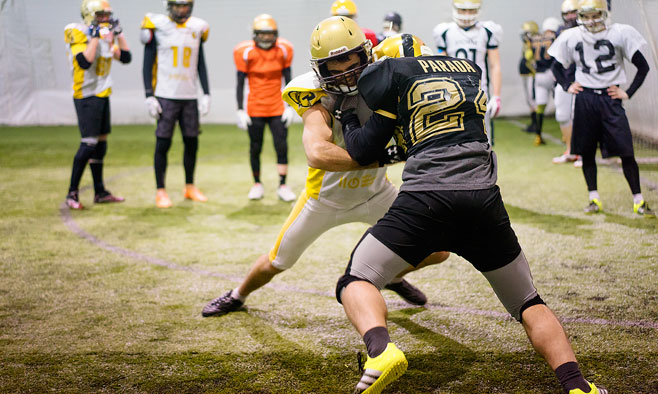 There are few available practive grounds in Moscow and the cost can be prohibitive, particularly as the players have to fund the sport themselves.

"Nobody offends me directly of course. But some really like to turn any conversation to politics. They try to catch me — by starting an argument about black rights, for example," he says. "It doesn't feel serious, but it's still quite unpleasant."

The icy relations between Russia and the United States have had organizational consequences too. Artemiy Rogov, 26, the team manager of the Moscow Spartans, is the man responsible for talking to bureaucrats every day. It's part of his job to look for training grounds and sponsors.

"Things have changed dramatically, he says: "Now, when a bureaucrat hears the word "American," for example, he is automatically inclined to say 'nyet.' And we see it on other levels too. Even ordinary Russians — they see us training and shout that we should be playing something more patriotic."

But for Rogov, the nationality of his favorite sport is clear — it's Russian. "Americans invented the game, but football is all about the spirit of the collective, a Russian concept, he says. "We sacrifice a lot to the game too, and what could be more Russian than sacrifice?"

"It's absurd to tie us to the United States and to politics just because of the word 'American,'" he continues. "I say 'f*ck politics, let's play football.'"

Less than two years after they started training together, Moscow's GirlPower female football team is preparing to take part in the Cup of Europe.
news

Russian Athletics: Kicked Out for Being a Bad Sport

This year Russia was caught in the biggest doping scandal in the history of athletics.
opinion

Football and the Russian Middle Class

It is easy to conclude when reading economic news or commentary that the government's activities dominate the economic life of the country. That is...
'RED LINES'