10, 13, 19, 18, 17. This sequence is the amount of medals won by Russian athletics teams at each Summer Olympics from 1996 to 2012. Since 1956, the Soviet or Russian national teams have always been among the top three medal-winning nations in athletics, the only exception being the 1984 Games in Los Angeles. The Soviet Union boycotted the competition that year. Thirty-two years later, it seems that the Games are about to boycott Russia.

In November 2015, the Russian athletics federation was provisionally suspended by the International Association of Athletics Federations (IAAF) following the publication of an independent report by the World Anti-Doping Agency (WADA) commission. The commission, led by former WADA president Richard Pound, accused Russia of “state-sponsored doping” and said the country has a “deeply rooted culture of cheating.”

The IAAF ruling means that Russian athletes are set to miss important upcoming events, such as the 2016 Indoor World Championships in Portland, and the Summer Olympics in Rio de Janeiro.

What Was in the Report?

Both WADA and Pound have a history of questioning the methods of the Russian Anti-Doping Agency (RUSADA). The lack of communication between RUSADA and WADA, and the suspected lack of proper anti-doping tests inside Russia led to a series of investigations by WADA. At the 2008 Games in Beijing, for example, Russian athletes were tested more frequently and intensively than the representatives of any other nation.

In December 2014, German television channel ARD aired a documentary called “The Secrets of Doping: How Russia Makes Its Winners.” It was mostly based on information acquired from two whistle-blowers, former RUSADA employee Vitaly Stepanov and his wife Yulia, a middle-distance runner and member of the Russian athletics team. The documentary stated that the majority of Russian athletes used banned substances. 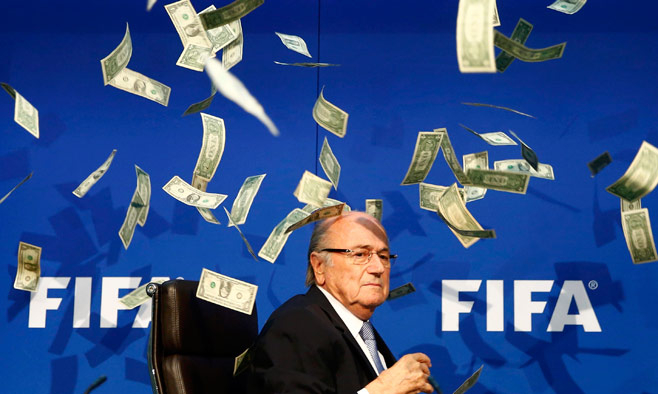 A British comedian throws bank notes at FIFA president  Sepp Blatter at a news conference in Zurich in July. The FIFA scandal didn't touch Russia directly, but Putin's support of Blatter pitted him against the rest of the world.

A WADA special commission was set up after the documentary aired to investigate the allegations.

Evidence to support the documentary’s claims was not difficult to find. From 2008 to 2014, RUSADA had banned 20 athletes, all trained by Viktor Chegin. His athletes won numerous medals at the Olympics and World Championships, and set a number of world records. But his coaching methods relied so heavily on doping that even his reputation didn’t stop RUSADA from suspending Chegin and his athletes, first from the international competitions and then, in July 2015, from domestic.

However, not all cases were as clear-cut as Chegin’s. WADA’s report suggested that RUSADA was deliberately covering up the evidence of further doping by tampering with blood tests and creating access problems for WADA officers. Grigory Rodchenkov, the head of the anti-doping laboratory in Moscow, was accused of destroying more than 1,417 samples before a scheduled visit from WADA. The commission also found that some of the anti-doping procedures may have been carried out not by RUSADA employees, but by FSB personnel. This was the reason behind the report stating that the doping was “state-sponsored.”

Pound wanted to hand over the findings of the report to Interpol and international courts. But the accusations against Russia were so damning that the possibility of the almost unprecedented Olympics ban appeared quickly.

After the news broke, Russia seemed to be in denial. Sports Minister Vitaly Mutko stated that the report was a result of Russian “dominance in athletics.” Rodchenkov’s only defense was to call the members of the WADA commission “idiots.” In his opinion, the report was “full of lies.” Members of the State Duma even suggested that Russia should boycott the Games. President Vladimir Putin said that Russia needed to “protect its athletes” and “conduct its own investigation.”

The antagonism from the Russian side may have heavily influenced how events unfolded. At first, it seemed unthinkable that an entire nation could be banned from the competition. But Russia’s reluctance to acknowledge its own fault and cooperate only proved WADA’s worst suspicions and forced them to turn recommendations into real grounds for suspension. Days after the report was published, RUSADA lost its license to hold anti-doping tests, and the Russian athletics team was banned.

This forced Russian officials to take action. Rodchenkov was fired and his laboratory was closed. Mutko announced that Russia is going to offer “broad cooperation” to IAAF and WADA to deal with its doping problem. 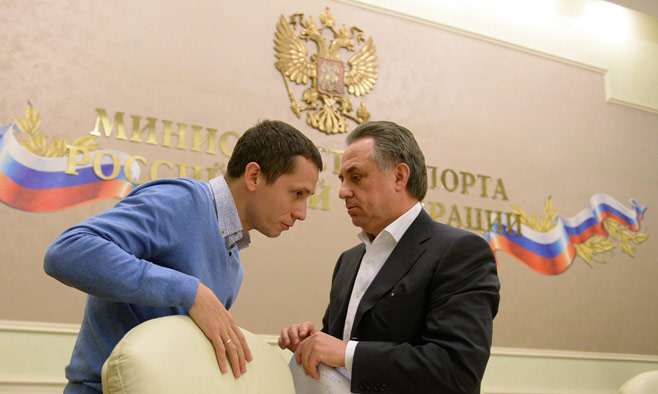 Yury Borzakovsky, Olympic champion and member of the Presidium of the Russian Track and Field Federation conferring with Sports Minister Vitaly Mutko during a press conference after the presidium's special session. Borzakovsky is called the one clean sports figure in Russia today.

The only way for the Russian athletics team to be allowed back into the 2016 Olympics is to comply with all further IAAF and WADA regulations. The next hearing sessions won’t happen until late March, so Russia will definitely miss the Indoor World Championships. In the eyes of IAAF, that may be enough punishment for the Russian team.

The current Russian athletics team head coach Yury Borzakovsky has a spotless reputation in the sports world. Even in the ARD documentary his name was singled out by a whistle-blower, who said “99 percent of Russian athletes are doping … everyone but Borzakovsky.” The 2004 Olympics champion acknowledged the fact that the team will miss at least three months of competitive starts and amended his training plan with the emphasis on the Games in Rio.

Things are looking up now, although there’s still a possibility that Russian officials will jeopardize this progress. After the UEFA European Championship 2016 draw, which placed Russia and England in the same group, Mutko said that English media is part of a “conspiracy” against Russia. And Putin, speaking at his annual press conference, declared that FIFA president Sepp Blatter deserves a Nobel Peace Prize — just five days before Blatter was officially suspended for eight years for corruption.

It seems that the “Russia against the world” narrative is still planted inside their minds after all. If Russia misses the Games in Rio next summer, then, just like in 1984, the decision will be purely political. Again.

Ivan Kalashnikov is a chief editor of Sports.ru. Contact the author at newsreporter@imedia.ru

With Russia set to learn its 2016 Olympic fate on Friday, here is a rundown of the report's main allegations.
news

Russian runner Tatyana Andrianova has been stripped of her world 800m bronze medal after IAAF confirmed that she had tested positive for the banned anabolic...
news

Russian Athletes Banned for Doping Head to Court in December

The Court of Arbitration for Sport (CAS) will hear appeals from the International Association of Athletics Federation (IAAF) against six Russian athletes...
Body count