Less than two years after they started training together, Moscow's GirlPower female football team is preparing to take part in the Cup of Europe.

Eighteen months ago, when a random group of very different women started kicking a ball around rather than do squats and push-ups at the gym, it seemed like no more than a slightly unusual and lighthearted hobby.

Today, having seized a surprise opportunity to participate in the Futsal Cup of Europe for women — football played indoors by smaller teams — in Spain's Barcelona in November, their enthusiasm is on fire.

"It is amazing how these adult, serious women, who are successful in their different professions, who have families, come here five times a week and work as hard as they do," says Alla Filina, head coach of the GirlPower Football Club.

One of the recent five training sessions a week was on an outdoor field. The women played for an hour in two teams, scoring goals, missing passes, falling over and shouting at each other — emotionally, but not aggressively.

Halfway into a recent training match, one of the women, tall and slim, jogs over to the coach and asks for permission to have a short break. "I have had a temperature since yesterday," she says. "Temperature? Why are you running around here then, you shouldn't be playing with a temperature," frowns Filina, the head coach. "It's OK, I want to play," the player insists. 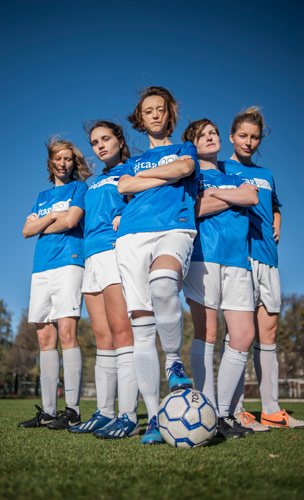 "There is no women's football in Russia because everyone thinks football is a male sport. But sport can't be male or female." Vladimir Dolgy-Rapoport, founder of GirlPower.

"We motivate people to appreciate the process first and then the result," says Vladimir Dolgy-Rapoport, founder of the Tagsport football school for children, located in Moscow's Tagansky park, under whose roof the GirlPower club exists.

The football classes for women were set up in spring 2014 after several of the moms of kids attending the school expressed the desire to have a go themselves while waiting for their offspring.

"There is no women's football in Russia because everyone here thinks football is a male sport," says Dolgy-Rapoport.

For some of the women who make up the team, it was a dream come true.

"I've wanted to play football for as long as I can remember," says Yelizaveta Surganova, 27, a journalist for the RBC news agency. "When I was a student at Moscow State University, I was excited to find out that there was a female football team. But the coach turned me down because all the girls in the team were more experienced. I was so disappointed," she said.

In the Tagsport classes, it was nice to know that women with any level of experience could participate, says Surganova, a serious and quietly spoken young woman. "It felt right even from the start," she adds. 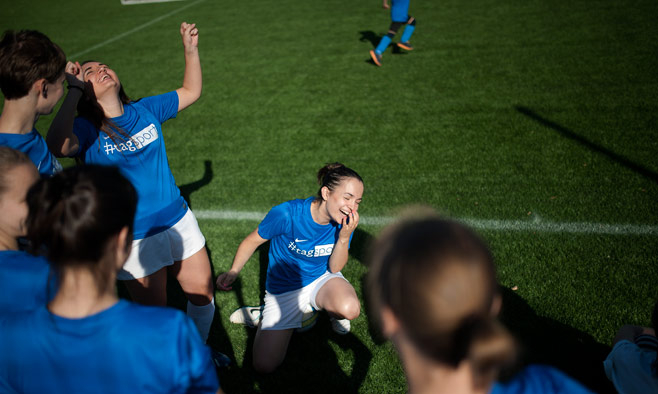 Betina Kostadinova, right, the team's chief (and only) injury faker. Just once, she simulated an injury during a game, and ever since, all of Betina's falls — even genuine tumbles — have been greeted by jokes from the team's other players.

Irina Reider, a smiling young woman of slim build whose day job is general manager for the Uber taxi app in Russia, had a very different experience: She played football when she was a student, and then spent years missing her favorite sport after graduating. "I searched for places in Moscow where I could play again, but there were hardly any options" — until Tagsport came along, says Reider.

"When I joined the team, I was much more experienced than the other girls, but they caught up amazingly quickly."

Betina Kostadinova, a 24-year-old advertising saleswoman who has loved playing football since childhood, echoed Reider's complaint about the lack of options.

"With women's football in Russia, it's not like ordering pizza when you have 250 links relevant to your search," she says.

For all three team members, the opportunity to participate in the Cup of Europe is something they had never even imagined.

"How can you dream about something that seems completely impossible" says Reider, laughing.

Things got serious for the women in the winter of 2015. 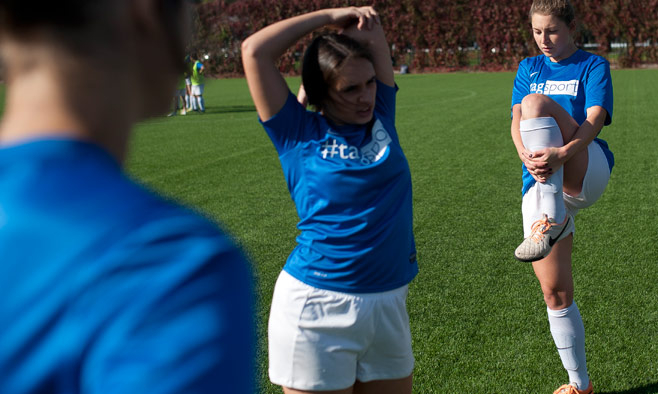 Margarita Litovskaya (left): "Women's football is a game for superheroes, from Catwoman to Black Widow."

The team started taking part in tournaments, playing against both amateur and professional clubs in Moscow and in other Russian regions.

In the spring the GirlPower Football Club was created and separated from the regular classes for women. In April the club took part in the Futsal Cup of Russia for women and took fourth place.

"The winner and the runner-up of the Cup of Russia are invited to the Cup of Europe. The teams that came first and second declined to go, for various reasons, and so we were invited," says Dolgy-Rapoport.

For him and coach Filina, it was a complete surprise. 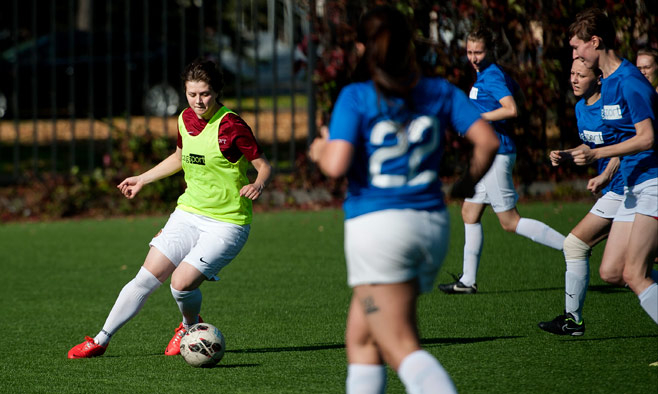 Liza Surganova (in green), a journalist for the RBC news agency: "Going out onto the field to brave the skepticism of many men, learning not to be afraid … all that takes a lot of courage."

"We didn't expect it. I knew the overall level of women's football wasn't that high, but still …" he said. "Basically, it was a result of the girls' crazy self-motivation."

Both Filina and Dolgy-Rapoport are skeptical about the team's chances of winning, and say that's not what the team is going to Barcelona for.

"All in all, it's going to be fun, funny, painful, vibrant, sad — it will be a lot of things, but it will be a great experience," the head coach said.

The team is currently looking for a sponsor who will help fund the trip. "For several girls who weren't even playing football a year ago, we need $25,000 to make their dream come true by participating in the Cup of Europe in Barcelona," says a statement on the club's website. 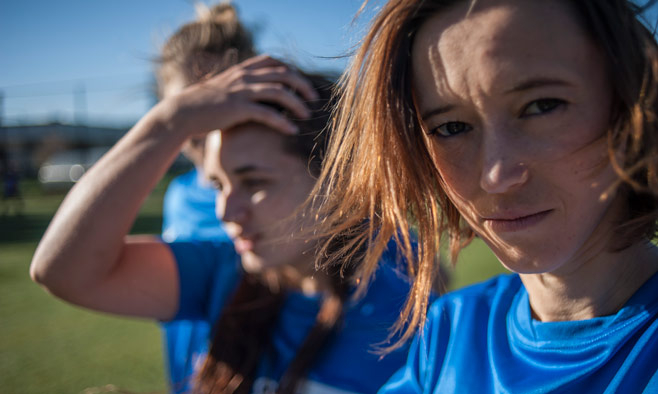 In the breaks between training sessions and games, Katya Bamburina runs her own business and looks after her son.

"We don't want to launch a fundraising campaign, we know how many charities need money, so if you have some, give it to them. We want a sponsor," the statement reads.

Right now the team consists of 28 women in their late 20s, he said. Only the very best will go to the tournament.

Even if the team is successful at the Cup of Europe, Filina doubts the girls would pursue careers as professional players.

"They didn't come here [for a professional career], they came here to have fun and make their dreams come true," she says.

FC Lokomotiv Moscow have apologized to the Albanian club Skenderbeu for their fans' behavior during their Europa League match in the Russian capital...
news

Russian Sports Minister Vitaly Mutko will have to address the severe cash crunch plaguing the country's football association (RFU) after he was unanimously...
news

Kaliningrad's 'Desert' Soccer Stadium Will Be Ready for World Cup

The scene looks more like a building project for the 2022 Qatar World Cup rather than Russia's 2018 finals, with a flat sandy landscape stretching out...
deadly strikes

Russia's Defense Ministry on Saturday accused the Ukrainian army of striking a hospital in the eastern Luhansk region, leaving 14 dead and injuring 24...