Head of the Russian Orthodox Church Patriarch Kirill and Pope Francis will meet in Cuba on Feb. 12. This historical meeting has been carefully orchestrated to appear casually improvised — both church leaders will be touring Latin America, and shall convene for a cup of coffee in Havana's José Martí International Airport during their flight layovers.

This convention over coffee will be the first ever papal meeting with a Russian church leader. Rome has been open to meeting but Moscow has constantly refused, pointing to disagreements over Catholic "proselytism," primarily in western Ukraine. Moscow wanted Rome to stay out of what Moscow considered its canonical territory while Rome objected to such a definition. So the two denominations acted as neighbors happy to exchange greetings but loathe to partake in further interaction.

For the first time in almost 1,500 years, a Pan-Orthodox Council is to be held June 16-27 at the Orthodox Academy of Crete. The Orthodox churches have no pope — they interact as friendly but independent states. Therefore, the council will be functioning more or less as the EU: They need to reach a consensus on all decisions. This does not exclude struggles for an informal primacy.

There are two obvious contenders for Orthodox leadership: Constantinople and Moscow. Traditionally considered the most important bishop's seat in the Orthodox world and once the capital of the glorious Byzantine empire, Constantinople is now a tiny quarter in the Turkish city of Istanbul. Regardless of size, Patriarch Bartholomew has ambitions to informally lead the global Orthodox community — after all, the Vatican occupies a geographically small area of great importance.

The Moscow Patriarchate considers itself the greatest local Orthodox church in the world, and expects to be recognized as the most influential one. It benefits from Russia's quasi-empire behind it, dedicated to the promotion of traditional Christian values in opposition to the secularized West — or so it thinks.

This council is not only about theological discussions. Once again, Ukraine is of great importance. While the majority of Ukrainian Orthodox believers belongs to the Moscow Patriarchate, some refuse to worship under a bishop based in an unfriendly state such as Russia. At the dawn of Ukrainian independence, they formed the Kievan Patriarchate, which is still unrecognized by the rest of the Orthodox world. The current political and military conflict has heightened this estrangement, as well as the desire of Orthodox Ukrainians to form a united national church. 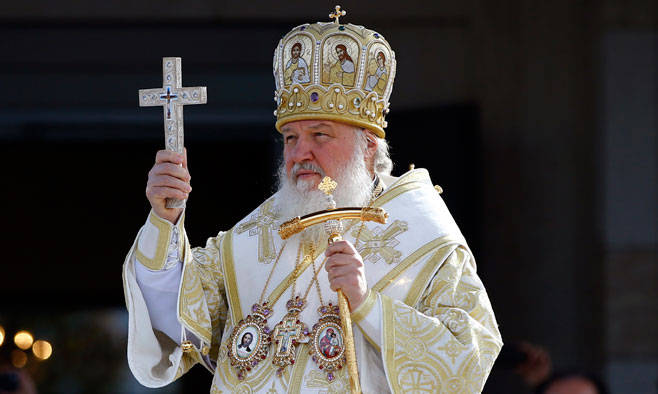 Patriarch Kirill holds a liturgy in the southern Serbian city of Nis on Oct. 6, 2013.

Moscow has made it clear that compromise is impossible, so hopes for an independent Ukrainian jurisdiction recognized by the global Orthodox community rest with Constantinople. It used to be the "Mother Church" for the metropolitans of Kiev, and could claim the same privilege again, however, this remains an improbable scenario. This only adds to the tension between the two episcopal seats. At the pre-council meeting in Chambésy, Switzerland this January, it became clear that the Ukrainian question will be the most contentious point of disagreement between the Constantinople and Moscow Patriarchates.

What does Pope Francis have to do with these maneuvers within Orthodoxy? Like in the former Soviet days, foreign relations are intricately linked with domestic policy. Constantinople is already engaged in a dialogue with the Vatican; Bartholomew met Francis on a Holy Land pilgrimage and in Constantinople itself. A refusal by Kirill to meet with Francis would not add to his popularity among other church leaders and would make Bartholomew look like the only legitimate representative of the Orthodox church. Such a situation is best avoided by Patriarch Kirill prior to the Pan-Orthodox Council.

But a meeting between Kirill and Francis would probably not have occurred without the Kremlin's blessing. Russia presents itself as the last defender of Christendom against brutal savages from the East and decadent heathens from the West. The nationalistic image of the "Russian World" which prevailed 18 months ago, has silently left the stage. So the old Soviet slogan "Proletarians of all countries, unite" has brought back with a modification — workers have been replaced with "conservatives."

According to the Russian Constitution, the Orthodox Church, like all religious institutions ,  is independent from the state. In reality, it has become increasingly engaged in both internal and external politics, sometimes as the Kremlin's helper and sometimes as its competitor: Who has a say in shaping the reemerging "Great Traditional Russia?" The Havana meeting is another step in this direction.

These aspirations are well represented with a meeting with the leader of the West's oldest and largest Christian church. President Vladimir Putin met Francis in June 2015, in the Vatican, and Kirill is keen to follow his example.

The location for the rendezvous was chosen to be as neutral as possible . While sitting in the transit zone of a tropical airport (in striking contrast with Rome-Constantinople talks), the churchmen will discuss severely prosecuted Christians in the Middle East, an uncontentious topic for such a long-awaited dialogue.

One cannot expect them to make substantial progress on the issues dividing the Catholic and Orthodox churches — but it sets a promising precedent.

Head of the Russian Orthodox Church Patriarch Kirill and Pope Francis will meet in Cuba on Feb. 12, the Gazeta.ru website reported Friday.
news

Russian Patriarch Kirill Does Not See Tragedy in the Economic Crisis

The head of the Russian Orthodox Church, Patriarch Kirill urged people not to weaken under economic difficulties in Russia, the Interfax news agency...
news