It's been a busy year in many places, from the dungeons of Tesla to the hovels of Russian prosecutors. U.S. Secretary of State John Kerry has been spotted in the Kremlin, imperial stormtroopers have been seen in the White House, and a goat has lain with a tiger in the Russian Far East, but claims it's platonic.

It's also been a busy year for Moscow, which has been up to its usual tricks, like changing into a completely different city every decade or so. The Moscow Times has brought back your favorite columnist, the Unfair Observer, to give you a quick roundup of how the heart of Russia has changed over the past 12 months, and, more importantly, what's in it for you.

In the Moscow of old, you could drive anywhere and park anywhere. Coupled with the fact that anyone could (and did) buy a car, this resulted in traffic jams that, if stretched in a single line, would have reached from Tverskaya Ulitsa to Enceladus, or something.

So City Hall finally launched a vicious operation against motorists. Paid parking, featuring road signs as contradictory as Russian policy on Ukraine, spread like cancer in a chainsmoker's lungs; backyards grew barriers to keep the invaders out; tow trucks became the enemy of man.

Since City Hall did not care much about logical parking tariffs or improving public transport, traveling around Moscow became more expensive, but not necessarily easier. But hey, the plan was to cull the motorist herd, not to make journeys comfortable.

If there is one thing that proves the U.S. is to blame for everything that happens in Russia, it is Moscow sidewalks. Their current state can only be explained by the extensive use of the Pentagon's secret gutter bombs, which turn perfectly normal streets into a break-a-leg mess of soil and stone.

Luckily, the local workforce was able to remove the traces of American bombings by winter, making streets in central Moscow more presentable — nice, even. It might not last, though — the city's streets have descended into messy chaos twice since Sergei Sobyanin became city mayor in 2010, prompting expensive renovation. The Pentagon must really hate him, and is surely preparing more gutter bombs as I write. 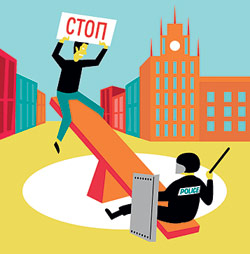 In the long-gone days of Putin's first two presidencies, the lovely Triumfalnaya Ploshchad somehow became a hotspot for unsanctioned opposition rallies. City Hall found no better solution to this problem than to fence it all off "for renovation." The opposition eventually drifted off to Bolotnaya Ploshchad to get their butts kicked, but Triumfalnaya remained lost, as renovation dragged on and on.

Well, they finally reopened it, making it a pedestrian zone and even installing nice swings that you have no chance of using because there is always someone else on them, even at 3 a.m. (believe me, I checked).

Of course, the first thing that happened is that the opposition rallied there again, without permission. So let's see if those swings stay open for long.

Moscow authorities may not be very keen on mass transit, but they wouldn't mind if motorists traded their cars for bicycles. A few years' effort to make the bicycle a valid means of transportation in Moscow culminated in a bicycle lane being opened around the Boulevard Ring in the heart of the city.

Now all that's left is to convince the pedestrians that they have to give up half of their already congested walking space to those pedal-pushers. It's not going well so far — but at least it's better than the insta-kills that happen when you take a bike on Moscow's motorways. Call it an improvement.

If you survive the still-hellish rush hour, the press in the Moscow metro and the start-stop-cuss experience of Moscow biking, you deserve a swig of something nice. So perhaps the sudden popularity of craft beers in tiny Moscow hipster pubs can be credited to the changes in the city's traffic.

The one downside is that it is so disheartening now to walk into a food-and-drink establishment and discover that they still only serve three varieties of watered-down factory-made swill instead of your usual selection of honey-, oak-, apple-, beetroot- and whathaveyou-flavored ales and porters. You get used to nice things so quickly. 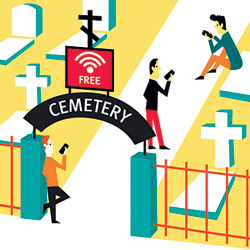 Three historic Moscow cemeteries will soon have free Wi-Fi. They say it'll make it easier to check out where your favorite Soviet poet or artist is buried, so you don't need to spend hours reading gravestones and generally soaking in the memento mori vibe. Though of course, if your Internet is down, there's an urgent assignment to file, and you can't take any more Starbucks ... you know where to go.

But really, it's just to make passing away easier for the online generation — there's something comforting about the thought of Internet in the afterlife. Until we start getting messages from there on this side, of course.

I mean the prince who baptized Kievan Rus, who else? Nevermind that the Rus was Kievan: Ukraine is the new Mordor, and Russians can't go to visit that giant Vladimir statue on the banks of the Dnieper anymore — so Moscow will get its own, right outside the Kremlin gates, where the other Vladimir can see it when he hurries to work.

UNESCO already okayed the construction of the monument, though heritage activists say it's completely redundant. At least it will only be 8 meters high and not the more than 20 meter Godzilla that was first on the cards. The Ukrainian Vladimir will remain the biggest on the planet, but 'tis the season of shrinking expectations.

As ugly as they are ideologically correct, giant paintings appeared on Moscow's walls extolling the "reunification" of Crimea, the strength of Russian arms and everything else the newfound Russian imperialism is proud of. The artists remain cagey on where the money comes from.

Most of those are gradually being painted over, however, while a lot of the apolitical graffiti remains, making Moscow — a city of dull walls — a much nicer place to be (check out that Bulgakov on Bolshoi Afanasyevsky Pereulok, for example). But not for long, perhaps—– a concerned citizen recently complained about an imperial stormtrooper graffiti downtown, calling it "American propaganda." The battle between ideology and art is on; get your popcorn. 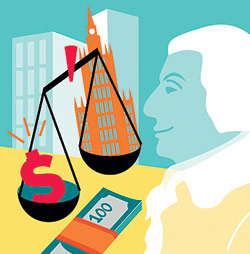 For years, Moscow real estate was the most expensive commodity in the world after Californium 252 (which trades at $27 million per gram). That apartment inside the Garden Ring your physicist babushka got from the Soviet government was worth two castles in the Highlands and a houseboat in Amsterdam.

Not anymore. Prices have about halved in dollars and slumping in rubles as well; properties remain vacant for months as owners scramble to find someone willing to pay 2013 prices (you don't expect them to lower the prices, surely?). It is far from affordable for ordinary Russians, of course, but at least Moscow real estate prices stopped being an affront to the ghost of Adam Smith.

Okay, maybe not paradise yet. But after two decades of capitalism, Moscow finally learned that a food joint's value is in, well, food, not the poshness of the interior design or the thickness of the stash of money you pay for your overcooked makarony.

So forget parking tariffs, the stupid pedestrians and the stupid cyclists, the queue for those swings and those imperialist graffiti. They towed your car? Well, take a deep breath and go grab some falafel, duck pâté, borsht, Vorschmack, Adjarian khachapuri, tempura udon, crab burger, kebab, tom yum, or good old steak done just right. And on that note, excuse me if I step out for a bite. See you in 2016.

Unfair Observer is the pen name of a Russian journalist that The Moscow Times has invited to observe the most brain-dead weekly developments in Russia.

On Monday, Moscow region businessman Amiran Georgadze got up, went to see his old buddies in Krasnogorsk City Hall, abused them for half an hour,...
opinion

Russia suffered its first casualty in Syria this week, only the Defense Ministry said he was a victim of unrequited love.
opinion Alexandra Prokopenko