Going meatless in Moscow used to be no mean feat. Until recently, most restaurants gave little heed to herbivores, and many a vegetarian will have memories of being served chicken soup — which "had no red meat in it."

But times are changing, and while the Russian capital may fall short of being the next veggie mecca, meat-free movements have long swept the city and made it a home. Whether you're a die-hard rawtarian or just looking for a break from cutlets and dressed herring salad, these five restaurants will leave you spoiled for choice. 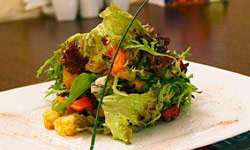 Touch of elegance in an airy cafe

As vegetarian cafes go, Avocado is something of an institution. Now with a branch on Ulitsa Tverskaya, the original cafe is located in a leafy, historic part of Moscow. Both cafes lift the spirits of Russian and visiting herbivores with a mouth-watering range of soups, salads, tofu steaks, and teas galore. Plenty of vegan and raw options, as well as meat-free variations of Russian cuisine. Live performances in the evenings, sometimes featuring seriously hip harp music. Really. 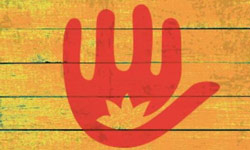 For many Russian vegetarians, the adventure with meat-free cooking began with a trip to India. Those enamored of Indian culture vouch for its authenticity, with food prepared in front of customers, organic spices straight from the subcontinent, and the informal atmosphere suggestive of southern India's tea shops. Close to the Kitai-Gorod metro station, Moscow-Delhi can nevertheless be tricky to locate — feel free to call if you need directions, and keep in mind that you may be asked to take your shoes off. 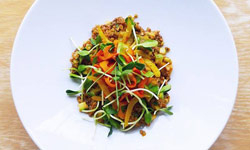 Cool cucumbers and juice from Canada

If hip and minimalist sound more up your alley, be sure to check out this Canadian restaurant and juice bar just off Tverskaya. Most of the dishes are vegan, but meat eaters might be surprised by the appeal of the scrumptious, freshly prepared cooking and broad range of — sometimes unusual — juices and smoothies. Try out the pomegranate and beet combination. 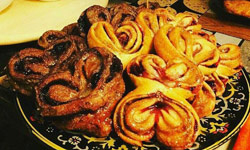 Affectionately known as "the bunker," this inexpensive vegan cafe is nestled by the entrance to an old bomb shelter, in the middle of the Artplay Design and Architecture Center. But the location is not the only thing which makes Fruits and Veges stand out: fans swear it is the best falafel place in town. The soups and smoothies also have a devoted following; staff are friendly, down-to-earth, and happy to take your order in English. 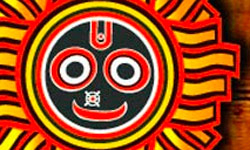 The founders of Jagannath are serious about vegetarianism, healthy eating, and all things Indian. Apart from five central, vegan-friendly cafes, the franchise offers cooking classes, an online veggie and vegan store specializing in hard-to-find ingredients, cooking classes, and a range of cultural events, often coinciding with Hindu festivals. A special breakfast menu is available at the Taganskaya and Kuznetsky Most branches; all five have lunch offers. Staff are proud of the broad selection of handmade sweets and deserts, some of them prepared with weight watchers in mind.