Almost a hundred years after the legendary ZiL car plant was founded in southeastern Moscow, its history seems to have come full circle.

A 400-hectare territory occupied with production lines, warehouses and even its own thermal power plant is now set to be integrated into the urban landscape — with residential buildings, parks, schools and recreation spaces.

At the same time, Moscow Mayor Sergei Sobyanin promises to renovate the Moskva River embankment on the territory of the former plant, which has been off limits to the public for decades, and open it to the public in 2017.

The ZiL ("Zavod Imeni Likhachyova," or Likhachyov Factory) car plant was conceived of as the First Car Plant in 1916 by the Russian merchant house "Kuznetsov, Ryabushinskiye & Co." After the 1917 Russian Revolution it was nationalized by the Bolshevik government and started functioning as a repair shop for trucks.

In 1931, the plant was named after Josef Stalin, and in 1956 it was renamed for the last time after Ivan Likhachyov, one of its first directors, in the broad destalinization campaign following the death of the Soviet dictator.

During its most productive years it produced hundreds of thousands of vehicles a year.

During Soviet times, one of the most popular truck models, the ZiL-130, could be seen in almost every village and on every construction site. It is still used in remote rural areas nowadays.

Along with trucks, ZiL is known for producing limousine cars for top-ranking Soviet and Russian officials. In 2009 several limousines were made especially for the Victory Day parade on Red Square. The last one was assembled in 2012.

But, as factory veterans recall, its prolific nature became its main problem.

"The biggest problem with ZiL was its size," recalls Eduard Ratnikov, 72, a designer engineer who used to work for the plant in the 1970s and 1980s.

"Instead of reconstructing it, they were building additional warehouses and workshops, and sometimes one component was driven by a car to the other side of the plant to be attached to another component," he said. There was a free bus driving employees from one plant's facility to another.

Ratnikov remembers that at times ZiL had as many as 70,000 workers and a "particularly socialist atmosphere."

"There was no freedom there, your every move was registered: when you come to work, when you leave, where you go, when you take a break. But most people were comfortable with that," he said. 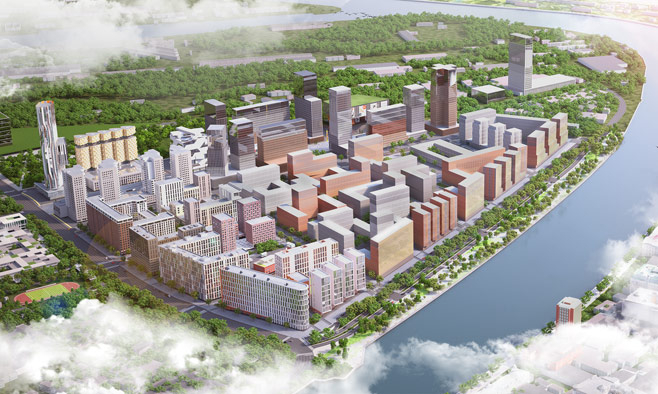 An aerial view of the planned ZiL district, including the signature 150-meter tower and the residential building with diamond-shaped facades.

Moscow authorities have been thinking about reconstructing ZiL since 2011.

At that time, the situation at ZiL was dire. Its main production lines didn't function, and the enterprise accumulated serious debt with utilities companies. One of them, a Gazprom subsidiary, even sued the plant over $5 million in debt and demanded that the court declare it bankrupt.

At the end of 2011, authorities announced a tender for the best ZiL development project. In 2012 Russian architectural bureau Meganom won the tender and created a master plan for the territory.

In 2013, Mayor Sobyanin declared that the industrial zone would be turned into a modern urban district that would accommodate some 30,000 residents and offer more than 40,000 jobs.

Car production was to continue in one area, reduced to 50 hectares of mostly assembly facilities.

As one of the largest reconstruction projects Moscow has ever seen, according to a claim by Sobyanin in 2013, the new ZiL would require between $10 billion and $12 billion in investment and will take between 10 and 15 years to implement.

Glimpse at the Future

In early 2014 City Hall announced a tender for the project of reconstructing part of the ZiL's territory, and in April the winner emerged — Russia's major development company, the LSR Group. LSR is one of the largest real estate developers in Russia, famous for its ambitious upscale real estate projects in Moscow and St. Petersburg.

A year later the company presented the Zilart project to the public.

The 65-hectare development area will be built by 2022, company spokesman Konstantin Veryuzhsky said last month, for a not-insignificant sum.

The area, according to the authors of the project, will include residential buildings, modern educational centers, a large park, and a river embankment with restaurants, shops and all kinds of entertainment spots. 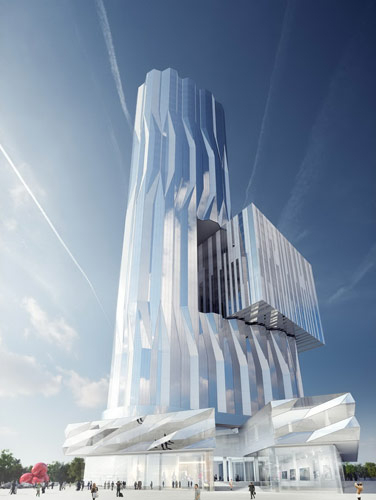 New York-based architect Hani Rashid designed the 150-meter tower to look like a wave undulating in the wind.

The signature objects of the area — the museum center Hermitage Moscow and the 150-meter high tower — are going to be designed by Hani Rashid, the prominent New York architect.

Hermitage Moscow will be a branch of the world-famous Hermitage Museum in St. Petersburg devoted almost exclusively to contemporary arts.

"It's an alchemic experiment, an attempt to combine Russian idealism and American modernism in one project," Rashid said during the presentation of the project in October.

The 150-meter tower is supposed to be the district's dominating object: it will have waves on its exterior and look as if it is rippling in the wind.

Another notorious building — a set of five 75-meter residential towers with diamond-shaped facades — is going to be designed by the Dutch architecture firm Neutelings Riedijk. The "diamond" look will be achieved with glass and steel panels.

Some of the buildings left on ZiL's territory can be considered heritage buildings for their unique architecture, says Denis Romodin, an architectural historian.

"An office building of the plant built during World War I is an interesting example of neoclassical architecture of the 1910s, and a whole complex of buildings related to Kozhukhovo railway station, built in 1907-08, are examples of transport architecture and rational modernism of the 1900s," he said.

During renovation of such territories, Romodin added, two things are important: creation of new spaces that would be comfortable for both residents and visitors, and conservation of the existing industrial architecture elements.

"[These elements] might not match the new buildings … they can be contrasting with them," he said.

Nevertheless, developers will have to take into consideration the existing layout of the territory.

"[In this case] it is large and wide alleys created in 1930s, and island-like elements of industrial architecture of the first half of the 20th century," Romodin said. 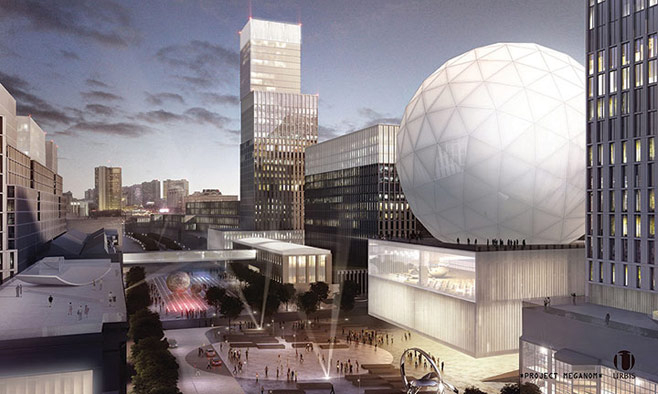 The planned view of the Zilart district.

Soon after having taken office, Sobyanin announced that City Hall would start reconstructing Moscow's industrial zones which occupy, according to him, as much as 20 percent of the city.

Some of the industrial zones — like Moskvich in southeastern Moscow — were turned into modern industrial parks that house high-tech enterprises. Some, like the territory of the former sugar plant in the northern part of the city, became creative clusters and exhibition spaces.

The most notorious experience Moscow authorities had with turning an industrial zone into a residential area was the construction of the Moscow-City business district — the biggest development project undertaken by Sobyanin's predecessor, Yury Luzhkov.

Sobyanin has repeatedly called the Moscow-City project a nuisance for the city, attracting thousands of drivers every day and not offering adequate infrastructure to accommodate them.

According to Moscow's chief architect and deputy chair of City Hall's committee for architecture and urban development, Sergei Kuznetsov, city officials' attitude to large projects like Moscow-City has changed drastically over the past several years.

"There are several things without which we don't start a project now: attention to infrastructure, and understanding how it is going to financed. In planning we resort to the practice of launching contests … and we choose the very best projects from the better ones," he said.

Recently the LSR Group has launched an intense campaign, announcing early apartment sales in as-yet-nonexistent buildings — a move that in the Russian real estate market often raises suspicions of how much money the company actually has to invest in the project and whether it will be able to see it through.

Yury Ilyin, member of the LSR Group board, said that the company has funds to guarantee that Zilart will become a reality.

"LSR Group has been operating for years on the Russian market and possesses financial reserves that guarantee implementation of the project," he told The Moscow Times in written comments.

Yet experts and Muscovites talk about the realization of Zilart with a cautious "if." Over the years, the Russian capital has seen many ambitious real estate projects start off well, only to remain empty unfinished skyscrapers several years later that the developer doesn't have the money to finish, with City Hall not financially equipped to engage in court battles in order to demolish the buildings.

Moscow's prominent architecture critic and urban development specialist Grigory Revzin recently stated that "quality, expensive architecture" no longer exists in the city, but, according to him, the Zilart project may be a return to form.

"If the project is implemented, such architecture will return [to the city]," he told The Moscow Times.

Correction: A previous version of this story incorrectly named Mr. Ilyin of the LSR Group board.

From next spring, Russian drivers will be able to buy the world's cheapest car — the Indian Bajaj Qute, the RBC news agency reported.
news

The number of new passenger cars sold in Russia dropped by 43 percent in the first nine months of the year, the RIA Novosti news agency reported Friday...
news

Krasnodar Has Most Car Crash Deaths in Russia

The city of Krasnodar in southern Russia has topped a list of 10 regional capitals with the highest number of deaths in car crashes, according to a study...
in the red