For the next few months the Alexandrovsky Сoncert Hall will host the weird and wonderful show "Gear. Mechanical Heart." Not a play, not a dance show, not a magic act and not a light show, "Gear. Mechanical Heart" is a combination of all of these arts in a genre called "synthetic theater." During this performance, the audience is treated to pantomime, classical Japanese Kabuki theater, original music, contemporary dance, magic, advanced 3-D mapping and lighting effects. All of this is mesmerizing. The only thing missing is much of a plot, but that doesn't mean that you'll miss one. The brilliant cast and constantly changing special effects carry the audience along.

"Gear" comes to Moscow from Japan, where it has something like cult status. At over 1,000 performances, it is one of the country's biggest theater hits. It tells the story of four robots who are left behind in the abandoned toy factory where they worked. The robots, who are played in Moscow by a team of world-class dancers — including Maxim Chaplygin, the reigning world breakdance champion — are stuck in a perpetual work routine, oblivious to the fact that the factory has long been closed.

One day a doll, one of the toys the factory used to produce, appears before the robots and changes everything. With the touch of her hand, she unlocks each robot's hidden talent, and through her they experience emotions for the first time. The bleak factory turns into a spectacular playground of flashing lights, breakdancing, mime, illusion and animation.

The elaborate and magical set seems to be a character in its own right. It is made of kilometers of metal pipes, cogs, light bulbs, levers and large pieces of industrial equipment. The key element, however, is a giant revolving cog on the floor with which the performers constantly interact. A revolving stage is a traditional part of Kabuki Theatre, a style of Japanese theater that appeared in the 17th century. In this production, it is one of the key elements of the set and action.

A production with its roots in Japanese Kabuki theater might not seem like a natural fit with Russian theatrical traditions. Igor Orshulyak, the director of the Russian adaptation, told The Moscow Times that "Russian theater has very strong dramatic and psychological roots, and therefore we adapted the original Japanese production to appeal to the expectations of a Russian audience."

That might be true, but the show still is markedly foreign in both concept and execution. The costume design and makeup has turned the actors into Japanese anime characters, and the loose plot does not follow any of the conventions of Russian theater. That might not suit every theatergoer, but for many it will be a breath of fresh air. 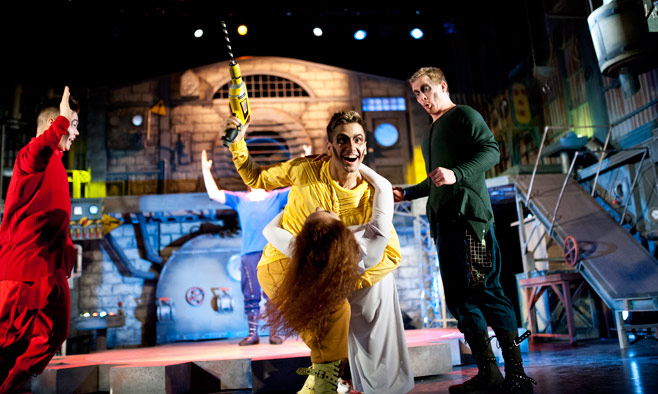 World breakdance champion Maxim Chaplygin plays one of the robots.

It certainly is wildly energetic, and every moment is filled with movement, sound, and emotion.

Chaplygin, who plays the curious and joyful yellow robot, spoke to The Moscow Times about the intensity of participating in such a production. He has a four-minute dance solo, which is "quite a long time in the world of breakdancing." He said that his favorite part of the play "is the part where I get to stand on the stage and do nothing."

A word should be said about the venue, which almost seems like a part of the performance itself. The Alexandrovsky Concert Hall is decorated in Stalinist classical style, and the hallways and stairwells are adorned with portraits of Soviet leaders. It is a bit of a cultural shock when the lights dim on the Soviet Union and the curtain rises on a dystopian story about robots in the future.

"Gear. Mechanical Heart" is designed to appeal to all age groups, but it is probably most appreciated by children, who like the the magic, outlandish costumes and exaggerated comedy. The show is also totally without dialogue, which makes it perfect for small children and ideal for kids of any nationality.

But Orshulyak hopes that the show won't be pegged as children's theater. Adults, too, "can allow themselves to open up, even shed a tear or perhaps just sigh." He said he hoped that "after watching such a simple, sincere and open performance, adults would change the way they see our world, which is so dreary." For Orshulyak, the principal message of his production is simple and universal: Life always goes on, and that no matter what situation people find themselves in, they should always try to be happy. "Even," he said, "when it seems almost impossible."