At the end of September, the Jewish Museum and Tolerance Center opened the first exhibition of works by the award-winning artist Anish Kapoor in Russia. The exhibition was supported by the Lisson Gallery in London and was timed to coincide with the 6th Moscow Biennale.

Anish Kapoor is one of the most celebrated and influential contemporary artists in the world. He was born in Bombay (now Mumbai), India but has lived and worked in England for over 40 years. He has won countless awards for his monumental sculptures, including the Premio Duemila at the Venice Biennale in 1990 and the prestigious Turner Prize in 1991. In 2009, Anish Kapoor was the first contemporary artist to have an exhibition at the Royal Academy of Arts in London. In 2013 he received a knighthood.

Just before his show, entitled "My Red Homeland," opened in Moscow, an exhibition of his works at Versailles outside Paris was causing a stir. One of his six large works, a large metal funnel called "Dirty Corner," was vandalized with several anti-Semitic slurs. The artist cleaned them off the first time they appeared, but chose to leave them the second time they were painted on. Just two days before the Moscow opening, a French court ruled that the sculpture had to be cleaned, going against Kapoor's wish to leave the words visible to all.

In this context, the Jewish Museum and Tolerance Center seems to be an entirely appropriate venue for Kapoor's first show in Russia.

But the museum curators said that they were motivated by purely artistic factors when they invited Kapoor to Moscow. In an e-mail exchange with The Moscow Times, the museum's chief curator Maria Nasimova wrote, "At the very beginning we decided to make a series of solo shows of great contemporary artists. As the curator for this, I made a list of artists we would be happy to work with. Anish accepted our offer and this all happened."

"My Red Homeland" exhibits four major sculptures that were created in 2003, all in materials Kapoor frequently works with, such as pigment, steel and wax. But there is a final component to the artist's works that becomes apparent in the exhibition space — the void. The space in and around Kapoor's works becomes reshaped by the sculptures. 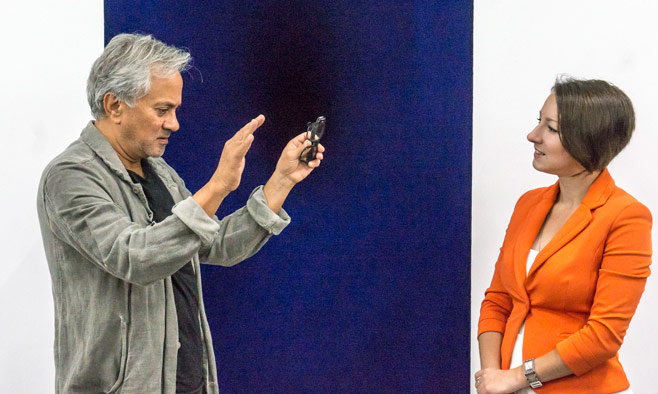 Anish Kapoor in front of his art piece from 1993, "My Body Your Body."

This is true of the gigantic S-curved mirror with a positive and negative side that resurrects and shapes a new reality around it through its shape, position, and size. And it's true of the central piece of the exhibition, from which the name of the exhibition is derived — a circular platform that is 12 meters across and supports 20 tons of red wax and vaseline mixed with pigment. The work seems to be dug out of the space around it.

Yulia, a visitor to the exhibition, felt particularly attracted to another of the four pieces on display, "My Body Your Body," a piece of art made of fiberglass and pigment with an intense dark blue color that seems to create a hole and shift as you look at it. "I have stared at this object for the past five minutes," she said, "and I can't figure out what is in the hole. It feels like if I get too close, I will get sucked into it. It creates a very unusual illusion."

Another visitor to the exhibition commented on an aspect of Kapoor's work that might seem obvious, but is key to understanding them. "Perhaps it's not the objects themselves that are so impressive," he said, "but more the size of them."

Kapoor's works are not for small private collections. They are intended for open display, outside or in other communal spaces. At the opening Kapoor said, "I'm very interested in public space. It's one of the places where there is interaction between objects and the way we live. It's an attempt, at least in a contemporary society where we have lost symbolic meaning of objects in public space, to find other motivations."

Kapoor was also asked several times about the meaning of his works. This was a question, it became apparent, that he does not liked to be asked.

"I'm not sure if there is really a message. I'm interested in the idea that sculptures and objects have a relation to space but are also about process. One part of this exhibition is process and nothing has been touched. Of course there are material questions about the object and its obvious materiality — the way objects relate to illusion."

The exhibition will run until January, after which the museum will continue its exhibitions of international and local artists. The season at the museum promises to be sensational. Curator Maria Nasimova said, "We are working very hard on getting more exhibitions like this, and are currently in negotiations with several of the greatest artists of our time."