Kirill Serebrennikov has a way of developing themes in a big way.

He crowned his opening season at the Gogol Center in 2013 with a powerful trilogy of productions that updated and Russianized iconic European film scripts. It was an unexpected and highly successful way to explore connections among cultures and generations.

Late last season he offered up a powerful contemporary interpretation of Ivan Goncharov's 1847 novel "A Common Story." He has now unveiled two companion pieces — a dramatization of Nikolai Nekrasov's classic narrative poem from the 1870s, "Who Lives Well in Russia?" and "Russian Folk Tales," a folkloric spectacle based on folk literature collected by Alexander Afanasyev in the 1850s and 1860s.

I haven't seen anyone else looking this closely at Russia's 19th century for topics, characters and stories that are capable of illuminating the times we live in. 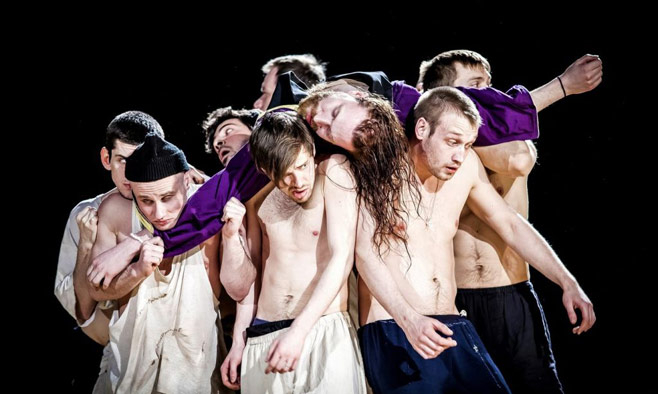 A raucous drinking spree is choreographed brilliantly by Anton Adasinsky.

As we might expect of something on this hot-button topic, "Who Lives Well in Russia?" is loose, sprawling, clumsy at times, probably too long and too detailed, and quite possibly, bound to be controversial.

At its best, it is powerful and moving. And I would argue that its occasional clumsiness and prolixity are necessary in order to bring out that power and emotion. You don't get fire without friction.

The answer to the question asked by the work — and I am giving nothing away — is, "No one."

Of course, that, in itself, in these days of government-controlled and Internet-trolled attitudes toward history, will be a gauntlet thrown down to many. Suffice it to say that the second of three acts is called "Drunken Night."

This metaphorical look at the Russian tradition of alcohol consumption is choreographed beautifully by Anton Adasinsky to a soaring chorale composed by Ilya Demutsky. The telling of the hard tale by means of aesthetically elegant and pleasing artistic devices —the clusters of dancing men onstage occasionally morph into something reminiscent of Ilya Repin's famous painting, "Barge Haulers on the Volga" — is a sly way of overcoming any reluctance we might have to considering such a topic.

The rest of the performance, as beautiful or funny as it is sometimes, is more likely to throw direct punches.

Act One features seven peasants — looking quite like men we might encounter today — responding to the question posed in the title. One poor soul who keeps trying to inform the others that only "the Tsar" lives well is repeatedly tackled and bloodied.

The third act is built around the harrowing tale of a woman — played with cutting simplicity by Yevgenia Dobrovolskaya — who is battered and abused by fate and family alike.

Serebrennikov, who designed the set, often cuts off the stage at midpoint with a prison wall topped with barbed wire. Otherwise he deftly utilizes a mostly open performance space, which the actors fill easily both with their numbers and athleticism. 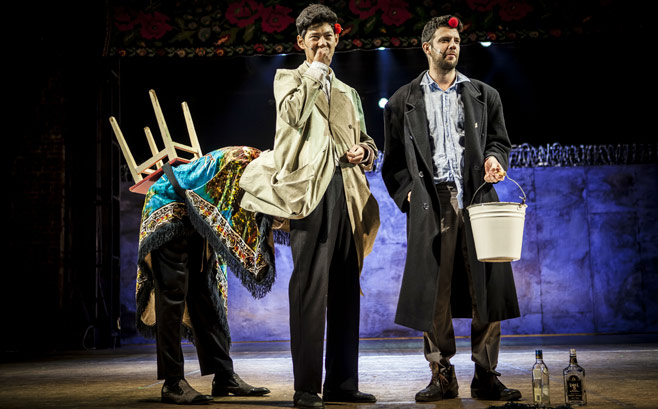 A live band deftly switching from torch songs and romances to blues, jazz and rock, lends genuine contemporary authenticity to the goings-on.

In fact, this is every bit as much an entertainment as it is a serious dialogue on eternal themes.

This is particularly true of any scene involving Rita Kron, of which there are plenty throughout all three acts. Her passionate vocals, usually delivered when she majestically steps up to a microphone, are the definition of a musical temperament that covers every bit of territory from a whisper to a scream.

Some songs are drawn directly from Nekrasov's poetic text, while others are borrowed from various Russian hit parades.

One such tune, "Where Can I Find a Song Like That?" which was popular in the 1970s, seems to have been written explicitly for Serebrennikov's production:

That tells of love and fate,

But no one will ever know

That it's a song about you?"

"Who Lives Well in Russia?" is fun cloaked in seriousness, and gravity wrapped in colorful, toe-tapping entertainment. It is another fine work from Serebrennikov and Gogol Center.