Not all the art on show this week is cutting-edge contemporary. For art lovers who appreciate an older aesthetic, there are several new exhibitions well worth seeing.

Conceived as a continuation of the wildly successful Caravaggio exhibition by the Pushkin Museum in the winter of 2011-12, which displayed 11 works by the great Italian master, this exhibit sheds further light on the artist through a visual demonstration of the immense influence he exerted on his contemporaries. While at the center of the display is Caravaggio's "Boy Bitten by a Lizard," this is in fact his sole piece featured in the exhibit. In this way "Caravaggio and his Followers" is more a celebration of Caravaggists — Baroque painters who were strongly influenced by the style of Caravaggio.

These include the Dutch painters Matthias Stomer and Jan Van Bijlert, the French artists Valentin de Boulogne and Simon Vouet and the Italian Gaspare Traversi, whose works are being shown in Russia for the first time. The wide spectrum of 17th-century works from all over Europe from the Longhi collection gives a strong indication of Caravaggio's role in the development of European art.

Although Caravaggio is very well-known now, he was nearly forgotten after his death in 1610, and it took three centuries before his contribution to the development of Western art was appreciated. The resurrection of his reputation and importance is largely due to Roberto Longhi, an art scholar who was particularly interested in the study and preservation of Baroque painting. As a young man Longhi collaborated with the famed art critic Adolfo Venturi on the journal L'Arte, publishing studies of then-unknown followers of Caravaggio: Orazio Bonacossi, Battistello Caracciolo, Orazio and Artemisia Gentileschi, and Mattia Preti. Longhi continued to study Caravaggio and his followers throughout his career, acquiring an impressive collection of Baroque paintings while on a Grand Tour of Europe with the esteemed art collector Alessandro Contini-Borgianni. In 1934 Longhi began his academic career as a lecturer at Bologna University, where his passionate and vivid lectures drew students from all over Europe, including the acclaimed film director Pier Paolo Pasolini and poet Attilio Bertolucci. 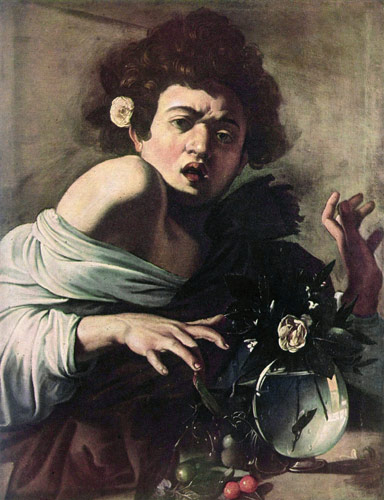 Fragment of "Boy Bitten by a Lizard" by Caravaggio, the show centerpiece.

It is thanks to Longhi's continued praise of Caravaggio in his academic publications that the name holds such resonance today. Although the artist spawned many imitators, Caravaggio himself became close to vanishing from the history books following his death. Longhi's renewed interest in Caravaggio's work resurrected his astounding work from the grave and re-established him as a central figure in European art. He asserted that such artists as Johannes Vermeer and Rembrandt could not have existed without Caravaggio, and insisted that even later artists such as Eugene Delacroix, Gustave Courbet and Edouard Manet would have been different had they not been familiar with Caravaggio's works.

Currently, as during the life of the scholar, Longhi's vast collection of paintings is stored in his home, Villa il Tasso, in Florence, which is now a major center for the study of Italian and European art.

At the Pushkin Museum, the first work visitors to the exhibition see is the painting "Boy Bitten by a Lizard," hanging alone on a wall dividing the grand hall in two. Works from Longhi's collection are displayed in the first room while pieces belonging to the Pushkin Museum's permanent collection are at the back. The vivid colors, dramatic contrast of intense light and dark shadows, and intense emotional content of the Baroque masterpieces on display fit in well amid the opulence and red colors of the main hall of the Pushkin Museum.

It would seem that this exhibition will be as popular as the previous exhibition, despite the emphasis on followers of Caravaggio rather than works by the master himself. Visitors remarked on the diversity of the European Baroque artists, commenting that even though they had come to see the work of Caravaggio they were "pleasantly surprised by the huge variety of work on display." One young couple from Moscow remarked that they "could spend hours admiring the works on exhibition."

Works from Longhi's private collections were brought to Moscow thanks to the combined effort of curators Viktoria Markova, researcher and conservator of Italian paintings at the Pushkin Museum; Mina Gregori, president of the Roberto Longhi Foundation; and Marina Cristina Bandera, the foundation's scientific director.

The exhibition "Caravaggio and His Followers. Pictures from the Longhi Foundation in Florence and The Pushkin Museum" will run until the Jan. 10, 2016 in the main building of the Pushkin Museum of Fine Arts at 12 Ulitsa Volkhonka. Metro Kropotkinskaya. Open Tues. through Sun. 11 a.m. to 7 p.m. 495-697-9578. arts-museum.ru.