One of the most hyped new Russian TV series “Londongrad” premiered on CTC this week. The ads for this show were impossible to avoid — they were literally everywhere: on the street, in the media, both offline and online, and even on the Moscow metro’s Wi-Fi home page. It’s the first scripted show on Russian TV set and filmed almost entirely abroad.

The show is about a Russian Oxford drop-out, played by Nikita Yefremov, son of the famous actor Mikhail Yefremov, and the daughter of a Moscow oligarch, played by the relative newcomer Ingrid Olerinskaya, who team up and start an agency to help Russians in London who find themselves in trouble — legal or illegal.

The Moscow Times talked to the show’s head writer Michael Idov, formerly editor-in-chief of GQ Russia and the author of two novels (“Ground Up,” in English, and “Chyos,” in Russian).

Q: When did you decide to become a screenwriter?

A: Several times, actually. The first time was around the age of 15. Actually, I graduated from the University of Michigan’s film school as a screenwriter. Then I slipped into journalism for the next fifteen years or so.

2010 was the second time I decided I wanted to become a screenwriter. New York Magazine, where I was working at the time, sent me to the set of “Breaking Bad” in Albuquerque, New Mexico. What I saw on the set just floored me. It was the way everyone was involved and knew they were making something exceptional, the way the entire set functioned and the way catering ladies discussed the finer plots of the episode being shot at the moment. It was just a kind of shared delight in turning something that’s on a page into something that’s real and tangible.

I realized that I no longer wanted to write about these things — I wanted to do them.

But then I got an offer that I could not refuse — to go to Russia and head up GQ. Ironically, during my tenure at GQ I found the courage to start actually writing. So I had to come to Russia to become what I always wanted to be.

Q: What did you start writing?

A: Andrew Ryvkin and I co-wrote a pilot for “Rushkin,” an autobiographical comedy about a character that features some traits of both Andrew and me. The character is a neurotic American writer who comes to Moscow, gets stuck here and sort of becomes a horrible person. It was on the strength of the “Rushkin” script that Slava Murugov, then head of CTC channel, approached me to do something about Russians in London.

Q: How did you come up with “Londongrad”?

A: Our brief consisted of three words: Russians in London. I always wanted to do a kind of picaresque adventure show — something in the vein of “Ocean’s Eleven,” very densely plotted with lots of twists and turns. Andrew had this brilliant idea to channel parts of the life of our mutual friend Miron Fyodorov, better known as Oxxxymiron, by far the best rapper in Russia right now. Miron graduated from Oxford and worked at a slightly similar agency [to the one depicted in the show] in London. We basically took the idea of this cocky Oxford guy, a Russian who doesn’t really belong with the Russians or with the posh crowd he has to run with, who begins to view the city as his hunting ground and concocts this weird job helping Russians with various problems. 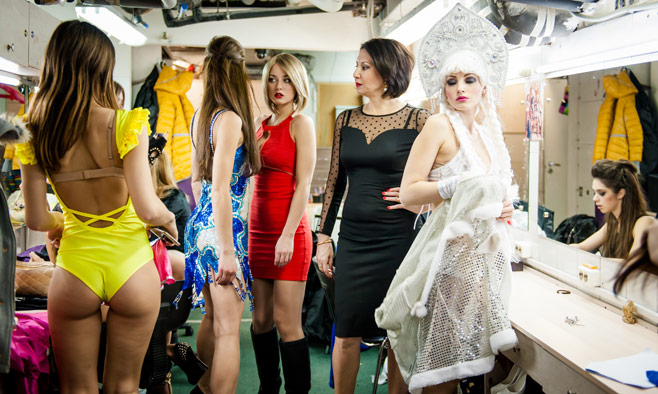 Actress Ingrid Olerinskaya (in red) on set with some extravagant co-stars.

Q: How much of “Londongrad” is based on real life?

A: There are bits and pieces of Russian London lore in the show, but they are used in a sort of post-modern collage way, like you see a bit of Natalia Vodianova and her failed marriage to a British aristocrat. We are not interested in satirizing or depicting anything real.

Q: As head writer, how much of a say did you have in the actual making of the series?

A: The Russian TV industry is very producer driven, it’s not very used to a screenwriter just staying and monitoring every aspect from casting to music to the actual shooting process. I am tied to the show in a myriad insane ways: six or seven of my songs are on the soundtrack, just about every male character on the show wears an item of my clothing — I donated my entire wardrobe amassed during my GQ years.

Q: How difficult was it to shoot a Russian show in London?

A: We were incredibly lucky to be able to shoot in London, not just shoot the tourist sights and then intersperse these shots with studio footage. In the pilot episode we have a 6-minute scene set and shot at Heathrow Airport. Episode seven was almost entirely shot at Oxford. In Episode four there’s a chase through Portobello Market. You have no idea what a privilege it is to have your scenes shot at exactly the locations where they are set.

I was a tyrant about accents. They didn’t just have to be British; they had to be from the right region and the right social class so that an Oxford don didn’t sound like a dockworker from Liverpool. And I don’t care that you can’t really hear it because of the voice-over, it’s still there.

That’s how we ended up hiring Owen Matthews as our British slang and life consultant. He got so into it that he ended up co-writing two episodes and even playing a fairly significant part as a Scotland Yard cop of Polish descent.

Q: How is screenwriting different from writing books?

A: Enormously different. For me the exciting thing about mainstream screenwriting is the total dominance of structure. It’s like building a model ship in a bottle. I really enjoy making the pieces fit just so. Which is very different from the way I approach fiction writing.

Q: What are you planning to do next?

A: We are doing a wildly ambitious TV series for Rossia-2. Valery Todorovsky is producing and Alexei Popogrebsky (director of the critically acclaimed “How I Ended This Summer”) is directing. Most of the “Londongrad” writing team is working with me — Lily Idov and Yelena Vanina. It’s a show about young diplomats in the Soviet MID (Ministry of Foreign Affairs) in the 1960s, navigating through the crises of the era. Shooting will begin in the fall.