As we prepare for the new theater season, a note of alarm can be heard in the air.

Consider the titles of three of the season's biggest new shows — "The Suicide," "Russian Blues" and "Who Lives Well in Russia?"

But beyond that clear, thematic hum of consternation, there is a quieter, less evident aspect of uncertainty to the new season. Six of the city's major houses are closed for renovations, some of them moving into their second or even third years of reconstruction.

Add to that another key venue — the Gogol Center — which is experiencing serious financial problems, and you get a picture of a theater community that is very much in flux.

Reconstruction would normally be a sign of growth and expansion. And that may yet prove to be true in regards to the Taganka Theater, the Satirikon, the Sovremennik, the Maly Theater, the Hermitage Theater and the Contemporary Play School, all of whose home stages are boarded up while their performance spaces are being reconfigured.

But in troubled economic times, you can't help but question if the road to the future will remain rosy for all of them.

The Gogol Center, closed part of last season for renovations, is having a difficult time pulling out of a financial hole. It recently received good news when Oleg Tabakov of the Moscow Art Theater promised to pay some of Gogol Center's debts, but stability still appears to be a distant goal for this popular, innovative playhouse.

Meanwhile, the Stanislavsky Electrotheater, which reopened spectacularly in January after 18 months of renovations, recently learned that construction on its planned small stage and so-called outdoor "theater yard" has been delayed significantly, forcing numerous changes in the venue's plans for the coming season.

All of the closed theaters will continue to perform some of the time on borrowed or rented stages. But how good, for example, can Yury Lyubimov's old productions for the Taganka really look in the cavernous, boxy confines of the Theater Kinoaktyora?

The good side of all this is that Moscow theater is nothing if not resilient and resourceful. Despite closed doors at many venues around town, we have a plethora of new shows opening over the next month or so. 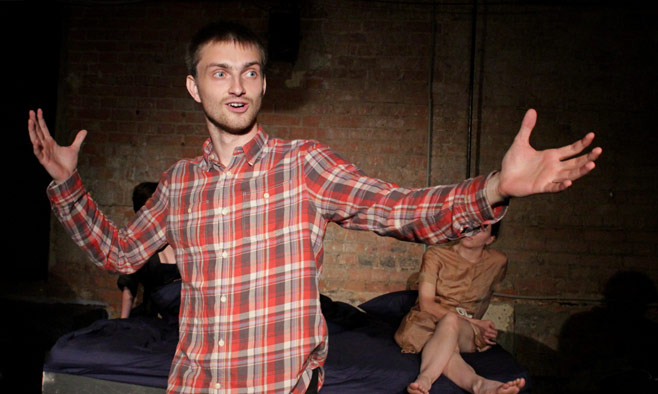 Teatr.doc, now housed at its third venue, opens its season with "24 Plus," a candid look at sex, love, and life.

The Gogol Center, for instance, has taken the high road during its time of troubles. It will unveil not one, but two major new productions by Kirill Serebrennikov on its main stage.

"Who Lives Well in Russia?" is expected to be an innovative interpretation of one of the most famous poems by Russia's great civic poet Nikolai Nekrasov —"Who Lives Well in Russia?" Nekrasov's narrative poem looks at the hard life of Russian peasants, but Serebrennikov apparently will use that as a springboard to tell a bigger story cutting across eras. It plays Tuesday, Wednesday and Sept. 17.

"Russian Fairy Tales," opening Sept. 19 and 20, reaches back to a famous collection of folk tales compiled in the mid-19th century by Alexander Afanasyev. Working with a team of young directors, Serebrennikov explores some of Afanasyev's most famous tales as a source of Russian attitudes to freedom and individuality.

The Yermolova Theater will attempt to give Moscow its second major production of Nikolai Erdman's classic tragicomedy "The Suicide" in as many seasons, starting Sept. 17 and 18. A production of the play last spring at the Studio of Theatrical Art was a highlight of last year's offerings.

At the Yermolova, young director Denis Azarov applies a contemporary point of view to Erdman's play about a simple man in hard times who is besieged by people who want him to kill himself to further their own particular causes. The production stars Alexander Kudin and Kristina Asmus, who impressed mightily last season in the Yermolova Theater's production of "The Inspector General."

Dmitry Krymov, arguably Russia's most celebrated director today, unveils his production of "Russian Blues: Hiking for Mushrooms" at the School of Dramatic Art on Oct. 8, 9 and 10. This episodic piece, written by Krymov himself, is visually spectacular, a feast of colors and images. Ostensibly following a family going out into the forest in search of mushrooms, it actually tells the story of several Russian tragedies, absurd and real, including toilets backing up and the sinking of the submarine Shch-207 in 1943.

The Satirikon, while closed for reconstruction, will perform its entire repertoire next door at the KVN Planet complex. Its first premiere of the season should be exciting — a dramatic rendition of the famous Yakov Protazanov silent film, "The Man From the Restaurant."

Directed by Yegor Peregudov, and opening Oct. 21 to 23, it will surely invoke some ghosts.

Protazanov's 1927 film starred the legendary actor Michael Chekhov as a harried waiter in a restaurant full of crude customers and fellow workers. Peregudov cast the great Konstantin Raikin in Chekhov's role, giving us reason to hope for one of Raikin's most memorable outings in recent years.

The Stanislavsky Electrotheater continues its series of collaborations with major European directors when it unveils Heiner Goebbels' production of "Max Black" from Oct. 7 to 11. 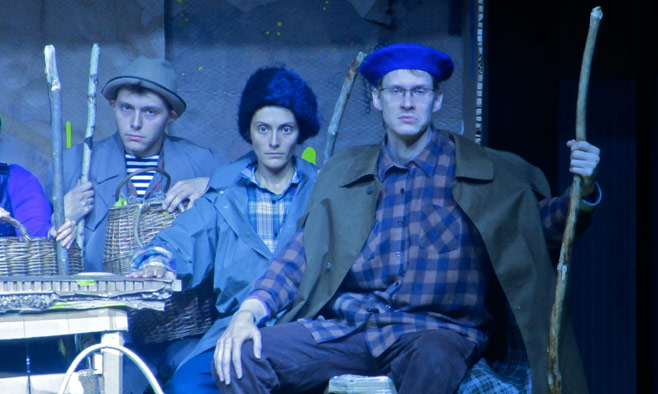 In "Russian Blues," a family mushroom hunt is time to talk and remember.

Goebbels, a German composer and director, compiled "Max Black" from a few texts by Paul Valery, Georg Christoph Lichtenberg, Ludwig Wittgenstein and Max Black, the Russian-born American philosopher. It communicates, however, primarily through music and visuals.

Another show with a musical basis will be Vladimir Pankov's interpretation of Alexander Vampilov's classic 1970s play "Duck Hunting" for the Et Cetera Theater. This drama about hard choices in the Russian provinces opened two weeks ago and next plays Sept. 24.

Fans of playwright Ivan Vyrypayev have double reason to celebrate, as he has plays opening in two theaters almost simultaneously. Viktor Ryzhakov's production of "Illusions," a tale of two interconnected married couples, opens Sept. 19 at the Moscow Art Theater. At Praktika Theater, Vyrypayev's own production of his newest work, "Unbearably Long Embraces," premiered last week and will next be seen in mid-November.

For all this, however, Moscow's busiest and fastest-moving theater remains Teatr.doc.

Kicked out of two spaces by Moscow authorities last season, Teatr.doc now opens its first full season in its newest digs on Maly Kazyonny Pereulok. As managing director Yelena Gremina promised when the theater took up its new home in late June, the repertoire this year features a whopping 12 new shows.

Productions like "24 Plus," "Actors," "Beyond Theater: What If I Don't?" "Lear Kleshch," "Silence on a Given Theme," and "Plato's Symposium" all explore the place of the individual in contemporary Russian life.

In the case of "Lear Kleshch," acted by Marina Kleshchyova, that place may be in prison, or, as in "24 Plus," it may be in bed with multiple partners.

Finally, Theater of Nations kicks off its new season with a show that opened at the tail end of last year — "Pushkin's Fairy Tales." Directed by American master Robert Wilson, it imagines Pushkin as no one ever has before. The show plays in September from Wednesday to the 19th.