As part of back-to-school week, The Moscow Times decided to crack open some books and find the best museums set in Russian authors’ houses and apartments. We begin with 20th century writers, and our main criteria for the best museums are original furnishings and possessions and interiors that vividly evoke the past. Many of these house museums are located conveniently close to one another, so you can easily turn a day of literary discoveries into a pleasant walking tour.

Built in 1902 by architect Fyodor Shekhtel for the millionaire Ryabushinsky family, this masterpiece of Russian style moderne was given to Gorky in 1931 by the Soviet government and was his home until his death in 1936. It is one of Moscow’s most incredible buildings, at once eerie with all the trappings of a haunted mansion, while also bright, intricate and delightfully surprising. Its focal point is an astonishing staircase which looks to be made of ­liquid stone and is completed by a ­cluster of icicle lamps held out like a paw. This masterpiece must be seen. With every piece of Gorky’s furniture slightly jarring with its surroundings — too big, too small, too sumptuous — you feel like you are trapped in a Dali painting as you wander round the mix-match of rooms where even the doors and windows appear to melt in front of you. Much of the furniture, the books in the writer’s extensive library, and the large collection of dainty Oriental figurines and vases are original, too. An astonishing house that should not be missed.

Right next door to Alexander Pushkin's former apartment is that of symbolist writer, Andrei Bely, who was born in this building in 1880 and lived there with his family until 1906. The apartment is kept in immaculate condition and detailed information about each of the rooms, which includes excerpts from Bely's diary, is available in English. Among the items on show are first editions of his works, including perhaps his most famous novel, "Petersburg," family trinkets, and fascinating drawings and charts composed by Bely. In the dining room, one such chart has been expanded to cover one of the walls of the room, explaining in frenetically detailed multi-colored crayon the time-scale of the author's life, noting the fruition of literary ideas, his meetings with other writers and artists, and the first jottings of his works. You could spend an age analyzing these scribbles, as we must imagine Bely did, too. 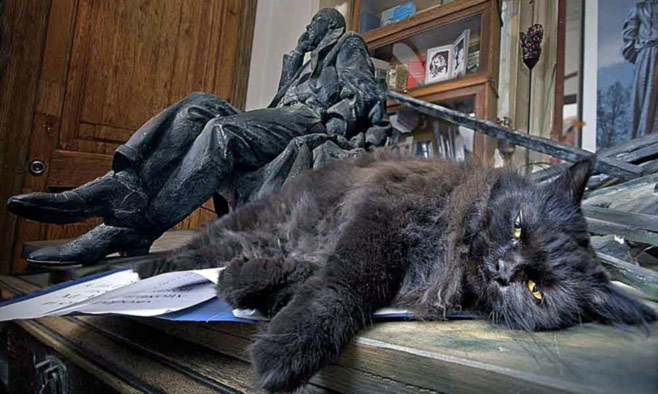 At the Bulgakov museum, black cat Begemot casts a dark eye at visitors.

A stone’s throw away from Patriarch’s Ponds, the setting of the opening of Mikhail Bulgakov’s most famous novel, “The Master and Margarita,” is the author’s former home. But tourists beware: there are two Bulgakov museums at the same address. The apartment where the writer lived is in entrance six, up the staircase covered with graffiti scribbled by the author’s legions of fans. “There is nothing that can surprise a man who has spent a year and a half living on corridor number 50” was what Bulgakov himself said of his time spent living in this communal apartment, and the museum has recreated the cluttered atmosphere that so vexed the writer. Discover what a tiny room Bulgakov and his wife lived and worked in, and with interactive exhibits piece together the histories of his pesky neighbors. In front of the building is a bus made to resemble the tram from “The Master and Margarita,” which trundles around the city visiting famous spots, both settings featured in Bulgakov’s novels, and his and his literary friends’ hang-outs. This is run by the ground-floor Bulgakov museum, which is called a museum-theater. The tram trip and excursions are all in Russian, but are worth it even if you have weak language skills.

When Tsvetayeva left this house in 1922, it was converted into a communal apartment; today, the museum has done its best to retrieve as many of the poet’s possessions as possible and return the building to its original condition. There is a wealth of information in English about the time Tsvetayeva spent in this house, drawing visitors’ attention to the caches of poems she wrote on the walls, recreating a sense of the bright children’s playroom, and leading you through the tragic journey of her husband, Sergei Efron, whose room in the attic was Tsvetayeva’s favorite for the memories of him that it held when they were apart. On the ground floor of the building, a large room has been converted into a gallery and concert space, where the museum frequently holds events related to Tsvetayeva, her era, poetry and many other subjects.

Stock up on books, relax in a virtual Russian countryside, hear a jazz great and more.
FINE DINING

French gastronomic bible the Michelin Guide has awarded its first stars to restaurants in the Russian capital.