Accompanied by the sounds of didgeridoo, rototoms and Tibetan gongs, conflict between Russia and Ukraine climbed to a new level this week as two rivaling international musical festivals with almost the same name kick off in southern Ukraine and Russia-held Crimea.

At the beach in the Ukrainian Black Sea coast village of Zatoka, just outside Odessa, the Koktebel Jazz Festival — KJF — started last Sunday evening with a meditative drum session by one of the Ukraine's finest drummers, Alex Fantayev.

This Friday, what is now called the Koktebel Jazz Party — KJP — will open in the Crimean town of Koktebel. It was here that the original jazz festival was launched in 2003 by Ukrainian businesswoman Lilia Mlinarich and then Ukraine-friendly Russian television journalist and jazz lover Dmitry Kiselyov.

The next thirteen years saw enormous changes. The jazz festival became one of the biggest open-air events in Ukraine, and co-founder Dmitry Kiselyov became Russian most notorious anti-Ukrainian television presenter and head of the state Rossia Segodnya media propaganda juggernaut.

Since the annexation of Crimea by Russia in the spring of 2014, there has been a bitter struggle over the cultural legacy of the festival.

There was no place for a Ukrainian festival in Russian Koktebel, so the original KJF had to leave. But then Kiselyov jumped into the gap and founded a new jazz festival in Koktebel, this one created with his news holding Rossia Segodnya and in cooperation with the Russian Culture Ministry.

Mlinarich and Kiselyov worked together for years, but Mlinarich said she had registered "Koktebel Jazz Festival" as an international trademark in her name in 2011.

At first Kiselyov wanted to use the same name for his festival, said Mlinarich.

"I called the organizers to ask them to change the name," she said, adding that there is no personal feud between her and Kiselyov.

For his part, Kiselyov tried his best to be friendly to his former Ukrainian music friends. During the opening press conference of his own festival in September 2014, he said, "I wish them success. I think the more jazz festivals there are, the better.''

But offstage the tension is palpable.

"The new organization in Koktebel continued to use our image and website while the Koktebel Jazz Festival is an internationally registered and protected Ukrainian brand, including in Russia," Mlinarich said.

Later the new Kiselyov-led festival created its own website, and its name was changed to the Koktebel Jazz Party.

But the battle of festivals goes on. When the Ukrainian KJF moved its dates from September to August 23-30, the Russian KJP moved its schedule up, too. Now they are overlapping for the weekend of August 28-30.

"We fixed the dates for 2015 based on the availability of artists and the weather forecasts, because we are an open-air festival. Way back in April we decided to do the festival in August this year and made that public in the beginning of June," Mlinarich said.

"Precisely two weeks after we started a big promotion campaign, that festival [the Russian KJP] announced their dates of August, 28-30. A coincidence? I don't think so," she said. 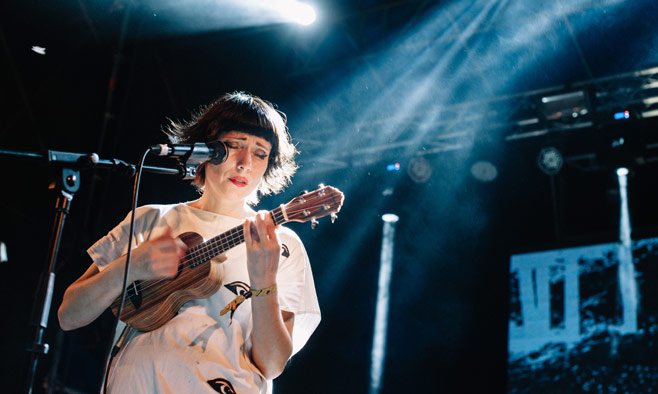 Benka of the Belarussian group Serebryanaya Svadba playing a ukelele.

When asked whether this was a deliberate strategy or an accidental overlap, the Russian KJP press office replied by e-mail that "when we made the decision, we only considered the high tourist season and the convenience for festival guests and participants."

In addition to tussling over the name and dates, KJF and KJP are also engaged in a fairly fierce battle for artists.

"For them, the situation in Crimea and Ukraine is confusing. They don't understand which festival they will be playing at," Mlinarich said of the foreign performers.

Last week the Ukrainian Ministry of Cultural Affairs warned that musicians who play at the festival in Crimea might be refused access to Ukraine for up to five years. Kiev considers Crimea an illegally occupied territory and claims that everyone who goes there without permission of the Ukrainian authorities violates Ukrainian law.

"I founded this festival in 2003, when Crimea still was Ukraine, and I didn't hit up against a single obstacle for jazz. I don't understand why now these obstacles have to be in place after Crimea became Russia," Kiselyov said in response to the move of the Ukrainian authorities in comments carried by RIA Novosti news agency.

One of the long-cherished darlings of the Koktebel jazz events, American-born Karl Frierson — former singer of the German band De-Phazz — swore allegiance to the Ukrainian public and said he would perform at the KJF on Ukrainian soil.

De-Phazz was invited by the Russian KJP, but the band refused in a long letter that Kiselyov posted on his Vkontakte site on August 8.

De-Phazz front woman Pat Appleton wrote that her group didn't want to get politically involved and that they were afraid of being banned from Ukraine and other European countries if they played in Crimea.

In the meantime, Enver Izmailov, a famous Crimean Tatar guitarist who played the old Koktebel Jazz Festival several times, will stick to the old venue this year. According to the Russian KJP's art director Mikhail Ikonnikov, Izmailov will play the opening gig at Kiselyov's party on Friday.

But Mlinarich says she isn't discouraged.

"I know that about 80 percent of our audience has always been Ukrainian. This week more than 160 musicians are playing for them," she said.