How can you convince men to go to off and fight a war in another country? What arguments will be most persuasive? What tricks of rhetoric will get them to sign up?

These were some of the problems facing a Dominican priest called Humbert of Romans in France in the 13th century as he considered how to convince his flock to go fight in the Crusades. Humbert wrote two treatises to help his fellow preachers convince young men to join the battle.

Almost 800 years later, Valentin Portnykh, a medieval history scholar and Ph.D. in history at Novosibirsk State University, began to study one of Humbert of Romans treatises called "On the Preaching of the Holy Cross," which was a set of instructions on what arguments and slogans would be most effective in convincing men to join the Crusades. Portnykh's work over many years produced a new text and new translations into contemporary Russian and French. 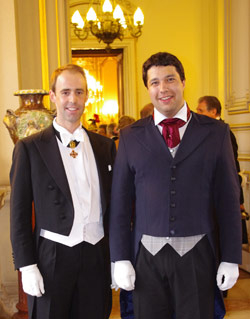 Portnykh, right, with a Knight of the Order of St. Sepulchre in Marseilles.

When Portnykh was studying at university in Lyon, his adviser, Nicole Beriou, directed his attention to this treatise by Humbert of Romans. The text was preserved in 23 handwritten versions and one early printed version. "Historians knew and quoted the treatise," he said in a telephone interview with The Moscow Times, "using the text that was printed in 1495 in Nuremberg, Germany. But no one had done a 'genealogy' of all the manuscripts. No one tried to reconstruct the hypothetical original text. That's what I did."

By carefully studying and comparing all 24 extant versions of the treatise, Portnykh was able to reconstruct the original document. That took nearly five years. Then he set to work on translating the Latin into contemporary Russian and French.

To do his translation into Russian, he enlisted the aid of a colleague in Novosibirsk. "I asked Ivan Remorov for help not only because he was a teacher of Latin, but because he was also a priest. It's a text about the Crusades that is filled with religious terms that I didn't know that well. He really helped me with the style, so the language would have all the beauty of modern religious writing."

The translation has been submitted for publication and will come out later this year. The French translation, which was edited by Portnykh's colleagues in France, is expected to be published next year.

For scholars, Portnykh said, "the document is a very significant source about how Western man in the Middle Ages viewed a holy war — a war conducted under a sacred slogan." And it may also be interesting to Middle East specialists, for whom the Crusades were a key link in the chain that led to today's current complex political and religious relations in the region.

But the treatise might also be useful to anyone studying propaganda. "The treatise was not for the general public, but for other preachers," Portnykh said, "It's instruction on what to say, a collection of arguments. A priest had to know which were the best slogans and arguments for each audience."

Among more serious examples, Portnykh noted some arguments that are still used today, albeit in a very different context. "Fighting in a Crusade gave a full pardon of all sins," Portnykh said. "And sometimes the priests used phrases that are close to modern advertising slogans like 'Sale! Special price!' Humbert of Romans and other preachers would say, 'Hurry while the Kingdom of Heaven is cheap. Very few people get this chance! You just have to make one effort, albeit a big one, and if you sincerely repent you'll be fully pardoned and go to the Kingdom of Heaven."

"Humbert and the other priests were telling them, 'Dying is a bargain!'"

The critical edition of the text and Russian translation will be published by Indrik Press at the end of this year.