At the end of July a new museum of Peter the Great was opened in a place not usually associated with the first Russian emperor: Derbent, Dagestan.

Derbent, which is about to celebrate its 2,000th anniversary, is the oldest and most southern city in Russia, located on the Caspian Sea near the border with Azerbaijan.

Peter the Great stopped in the city in August 1722 during his Persian campaign. As was his wont, for his stay the Russian emperor had a small dwelling prepared— a two-room dugout with an earthen roof built near the sea. The khan who ruled Derbent, which was then a vassal of Persia, handed Peter the keys to the city. Peter soon left for Moscow, taking the silver keys but leaving a Russian garrison behind.

Peter the Great's dugout seems to have been protected and preserved from the start. Certainly the site was well-known in 1848, when Governor Vorontsov had it surrounded by a stone fence and designated it with a sign: "Place of rest of the Russian Emperor Peter the Great." Two decades later, it was encased in an ornamented stone pavilion and covered with a metal roof. In this incarnation, the dugout was visited by emperors Alexander III and Nicholas II, and described by Alexandre Dumas, pere, in his book about the Caucasus.

But in the 20th century, the dugout suffered a harsher fate. The land under and around it became part of an industrial park. The spaces between the stone pillars of the pavilion were bricked in and the floor was built up. The pavilion was first a cafeteria and then housing. For nearly a century, several families lived in the space, apparently with no idea of the history under their feet and in their walls.

A few years ago researchers returned to the archives and found what they thought was the site of the dugout. They turned to Ziyavudin Magomedov's Summa Group and his new Peri Charity Foundation to finance excavations. The Summa Group had already funded two projects associated with Peter the Great: restoration of Peter the Great's house in Zaandam, the Netherlands, and a reproduction of the house that was installed at the Kolomenskoye Museum in Moscow. They funded excavations that located the dugout's exact location and began development of a museum on the site.

And then, according to the museum's architect Eldar Abdullayev, the hard part began: negotiating with six owners and seven families to move out of the 18 modern structures on the site. After a year and a half of negotiation, most of the site was freed up and the museum complex was quickly built.

At the end of last month the Peri Foundation arranged for journalists to attend the museum's opening ceremonies and development conference. Over a dozen directors and specialists from Russian and foreign museums; museums of Peter the Great; historical, archeological, charitable and art organizations gathered to see the site and offer their suggestions for development.

The excavated dugout and the new glass, stone and metal pavilion around it were universally lauded by the museum specialists, although their praise was sometimes patronizing. One museum specialist, who wished not to be identified, said simply: "It's impeccable. Perfect. I frankly never expected anything this good." 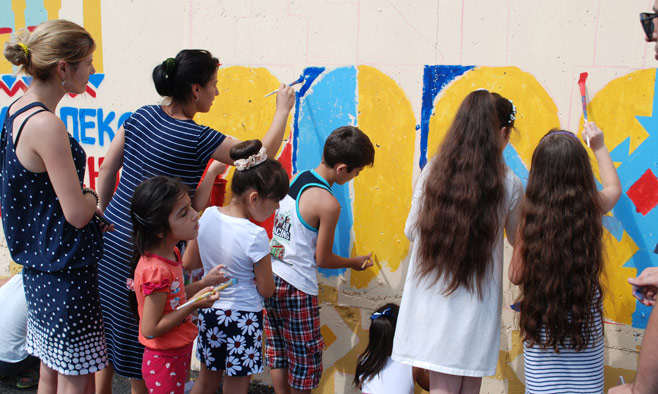 Children and volunteers decorating a wall across from the new museum.

In addition to the dugout, the museum includes an exhibition and activities hall set on a spacious stone courtyard. In the center, overlooking it all, is a reproduction of Mark Antokolsky's celebrated statue of Peter the Great done by the equally celebrated Dagestani sculptor Sharif Shakhmardanov.

But the foundation invited museum specialists not just to praise their building, but to help them decide on how best to develop the museum. The well-known art historian Patimat Gamzatova, the project's cultural adviser, told The Moscow Times that the museum was not designed to be a place that looked backward in time, but rather "it will have a strong function of enlightenment — a museum that will work with the local community to actively shape the intellectual environment." As Peter the Great "cut a window in Derbent to watch for ships on the sea," she said, "the museum will continue to cut a window into the greater world of innovation."

After the event, Polina Filippova, the Peri Foundation CEO, said that the foundation was still pondering the museum's status. But based on the advice of other museums, it would probably be either a private institution or a private-state partnership.

In any case, the museum will not be a warehouse of dusty artifacts, but "an active instrument of transformation — an intellectually open venue for the local community." In particular, the space will be used for "shows of modern art, photography, conceptual art — everything that is not yet represented in Derbent or Dagestan — and a variety of classes for children and young people. We already have offers of assistance and exhibitions from other museums and proposals for classes and exhibitions from the local community."

"For us," she said in conclusion, "Peter the Great is not what we are preserving in the museum. He's a symbol of modernization, innovation and education."

The Moscow Times was a guest of the Peri Foundation.

This three-man band has been topping streaming charts and inspiring - oddly, in their view - a TikTok following.