On the blustery terrace of a quiet cafe in Moscow, Natalia Freidina, the only female racing driver in the Blancpain GT Series, rushes in over an hour late. Ironically, someone has run into her car on the way.

Freidina is in Moscow with her team for the race weekend of the GT Sports Club Championship, but instead of racing, she is promoting a new design for her $720,000 McLaren 650S, created for her by artist and friend Aidan Salakhova. Later this year, the car will be on show as part of an exhibition by Salakhova in London. "My car is my home," Freidina says, lauding what she calls the "classical style" of the car's three colors — white, black and green. She explains how the dynamic design on her car is an outward projection of her character and individuality. Salakhova agrees. "Natalia gave me a new source of inspiration because her personality combines qualities that are rare in a woman. Our common project is a unique mixture of speed, drive and beauty. For me that is a perfect art composition."

Born in Samara, Freidina spent most of her early years living with her father, who worked in the factory that constructed Yury Gagarin's space rocket, and whose influence she credits as the reason for her pursuing motor sport. Her mother, she says, would have preferred a different fate for her daughter: "Education, university, three or four children … not racecars."

Despite her mother's protestations, Freidina went ahead and chased her dream of becoming a racing driver, but it hasn't been without its difficulties. "In Russia, women don't like me. They think I need racing for PR, or maybe to get another man, another husband." It may appear from the outside that PR is exactly what she is about, discussing her "art-car" and a new diamond-studded helmet being produced for her by jewelery designer "by Karine" — a project stemming from her affiliation with the Russian arm of the Rolls-Royce Motor Cars club. But Freidina is more than that.

"In Europe, it's another mentality. There I'm first and foremost a racer, a woman second. In Russia it's the other way around."

The variety of her racing career certainly shows her dedication to the sport. She began professional racing in the Formula 1 JK Racing Asia Series in 2010, and in 2012 moved to race in the European FIA GT3 Championship. She is currently enjoying her greatest success in the Blancpain GT Series, but offers continue to come in. She has recently received an invitation to race in the European version of NASCAR. 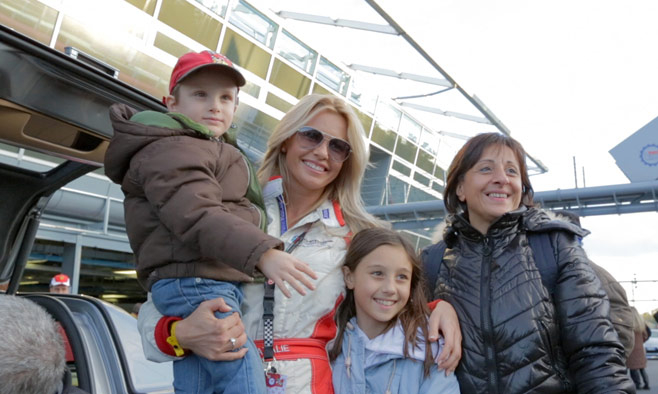 Freidina supporting a "6 Wheels of Hope" event for disabled children.

Jerome Galpin, the President and CEO of the NASCAR Whelen Euro Series, told The Moscow Times in an e-mail why he wants Freidina to compete: "As one of the most international series in Europe with 14 countries represented on the grid, the NASCAR Whelen Euro Series is looking forward to welcome Russian drivers and teams. With her valuable GT experience, Natalia would definitely be a great addition."

Bernie Ecclestone, the boss of Formula 1, has sought to redress the poor representation of women across the sport by discussing the possibility of founding a Formula 1 championship exclusively for women drivers. But Freidina says this isn't as forward-thinking as it first seems. "It's a very good project for Bernie, of course, and for Jean Todt [the head of the FIA, motor sport's governing body] in terms of finance and marketing. For the spectacle, we need to separate women and men. But for the sport, of course it's better to all be together."

That said, she is still concerned that she needs to prove herself. Two years ago, Todt invited her to become the women's representative for Russia in the FIA, something that she was unable to take up at the time due to racing commitments. Now, though, this is of interest again. "In Russia, you need a position in your life. For my job and for my project, it is very good."

The project she is talking about is the foundation of a rehabilitation center and club specializing in motor sport for children with physical disabilities, for which adapted karts will be built in a tank factory in Chelyabinsk. She was inspired by the stoicism of another driver in her championship, Alessandro Zanardi, who lost both legs in a racing accident, yet returned to race touring cars less than two years later. The key to assistance is inclusivity. "In motor sport, unlike in the Olympics, we don't have the sub-division of Olympics and Paralympics. When you are separated, you feel like you're different, but if you go together with children without disabilities in the same team and in the same championship, you feel ordinary."

In her racing and in her projects, Freidina is fighting hard against the naysayers, particularly in Russia, who suggest a woman cannot succeed in this field. Perhaps that is why she spends most of her time at her home in Switzerland, with a very supportive family. "I've lived in Switzerland for 11 years now, and I think finally my mentality has changed."

On This Day in 1931 Mikhail Gorbachev Was Born

The last leader of the Soviet Union celebrates his 90th birthday today.
hit the slopes

Take a Ski Trip — To Siberia

When you think of Siberia, skiing and snowboarding might not be the first things that come to mind.
weekend kitchen

Our favorite chef takes us step-by-step through the creation of this honey-creamy-tart-sweet confection.
snowy pics

St. Petersburg has been buried under mountains of snow following a days-long blizzard.