NOVOSIBIRSK — Artur Bilsky's Institute of Thermophysics recently sought to buy equipment from a Japanese company that was a routine purchase a few years ago. The request was turned down "categorically," said Bilsky, a researcher at the institute.

Hundreds of other Russian scientists are reporting similar experiences of being refused sale of scientific equipment from abroad, or seeing research papers curtly turned down by Western publications. The reason, they believe, is a combination of sanctions against Russia over its actions in Ukraine and rising hostility to Russia in the West seeping into the scientific community.

Since Russia annexed Crimea last year, it has become almost impossible for scientists in Russia to buy anything in the United States or Japan that has a dual purpose, said physicist Alexander Shilov, who works in the Institute of Laser Physics in Russia's scientific hub of Akademgorodok ("Academy Town") part of Russia's third-largest city of Novosibirsk.

"Due to the sanctions" or "the conflict in Ukraine" are the most common explanations Shilov hears for refusing orders from Russia. "When they sell a piece of glass, how do they know whether we will use it in a military laser or a medical one?" he said.

The U.S. and EU sanctions were designed to halt exports to the Russian defense sector. When announcing a new round of sanctions in July 2014, the European Union noted specifically that they "should not affect the exports of dual-use goods and technology" to Russia for "non-military use." In reality, many Western companies were so spooked by the sanctions and the penalties they could face for violating them that the door was shut completely, the scientists say.

An American scholar who works with Russian universities — and asked to be unnamed because he was not authorized to speak on his university's behalf — confirmed that his Russian counterparts are having difficulties with Western companies. In some cases, he said, companies are saying they fear that the equipment might get slapped with sanctions while it is being delivered, or that they no longer have support staff in Russia to service it.

What's more, foreign-made equipment is now less affordable for Russian scientists because of the depreciation in the Russian ruble, which lost nearly half of its value since the Crimean annexation.

The scientists' plight has been compounded by the Kremlin's own crackdown on Russian private funding of science, stemming from suspicions of Western influence. The government this year labeled the Dynasty Foundation, Russia's largest source of private funding for science, a "foreign agent" — which makes the group vulnerable to an array of surprise checks and audits. It is a Cold War term that carries connotations of spying. The foundation fell afoul of officialdom because its Russian founder funds the organization from money transferred from his foreign bank accounts.

The government has become increasingly suspicious of foreign-funded nongovernmental organizations, seeing them as potential agents of a hostile West. Russia has brushed off the sanctions imposed by the United States and European Union, saying that Russia has plenty of resources to replace banned imports with its own production.

The Russian government denied the scandal involving Dynasty is aimed at persecuting Russian scientists. Justice Minister Alexander Konovalov said Dynasty was receiving funds from abroad and therefore should be listed as a foreign agent.

But the sanctions have taken a toll, especially on scientists whose research hinges on access to Western-made materials and high-tech equipment. And several scientists told The Associated Press that since the March 2014 annexation of Crimea, publication of their articles in Western journals has either been delayed or turned down, with no explanation.

Editors and publishers at several U.S.-based scientific journals told The AP that they assess articles without any bias related to the geographic location of authors, or geopolitical concerns. They added that they have seen no evidence among their editors or reviewers to support the Russian scientists' claims.

"All papers are treated the same regardless of the nation they were submitted from," said William Kearney at the Washington-based National Academy of Sciences, Engineering and Medicine, which publishes the PNAS journal. 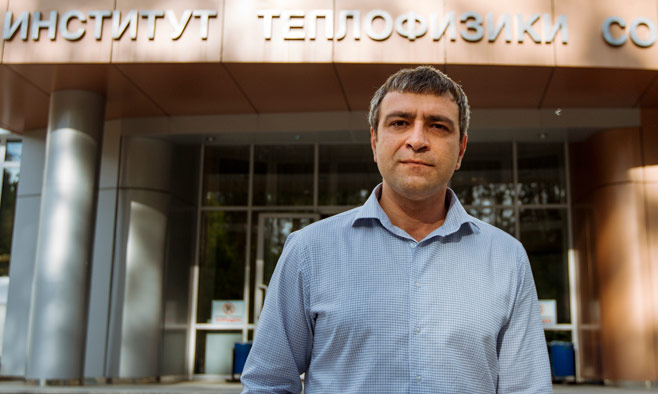 Physicist Artur Bilsky standing outside the Institute of Thermophysics.

Scientists who have lived or worked in Akademgorodok for more than 15 years are particularly distressed because life had been getting better for them recently, after years of struggling with almost no funding after the chaotic 1991 breakup of the Soviet Union. They recall how the cash-strapped Russian government in the 1990s largely left its world-class scientists to their own devices: Some packed their bags for university jobs abroad, and some had to sell goods at the market or grow vegetables to survive the long Siberian winter, with wages regularly delayed for months.

Young men fled Akademgorodok for better paid jobs elsewhere, leaving the scientific hub in the hands of scientists close to retirement age who had few prospects of alternative employment.

Gone are the days when the scientists of Akademgorodok, which was built in a Siberian forest clearing in 1957, were forced to take jobs as bus drivers or market sellers to eke out a living. Over the past 15 years, Russia's federal spending on scientific research increased 20-fold to 350 billion rubles ($6.3 billion) this year. Bilsky, 38, who has worked at his institute since 1997, has witnessed the transformation.

"If you stand at the entrance here and see who comes in and comes out, you'll see there will be a lot of young employees. Many young scientists can afford a car and vacation," he said.

The average monthly salary of scientists across Russia rose from 2,700 rubles in 2000 to 32,600 rubles last year, now worth about $600 after the sharp fall of the ruble. The relative rise in fortunes has turned Akademgorodok into a charming suburb filled with 30-somethings, where young women push children in prams and smart coffee houses cater to a younger generation.

Now politics is again clouding the scientific horizon. Dynasty was planning to distribute nearly $8 million this year in grants and scholarships. But after the Justice Ministry ordered it to register as a foreign agent, founder Dmitry Zimin and its board decided this month to shut it down in protest over the stigma.

President Vladimir Putin's spokesman, Dmitry Peskov, said he was sorry to hear that the foundation was closing down but insisted that no one forced it to do so.

The onslaught on the foundation has enraged many in Akademgorodok who have relied on its funding. Andrei Shchetnikov, who coaches the national youth physics team, said Dynasty has been covering half of the 1 million ruble budget for the annual Tournament of Young Physicists in Novosibirsk.

"For the projects that Dynasty supported, it was often the only steady financing they were getting," Shchetnikov said.

While confident that he'll find other sources of funding, he said more than money was at stake.

"What Dynasty has been doing ought to make the country proud," Shchetnikov said. "We have citizens who have made a fortune and understand that you need to support education projects — and that it's the future of Russia."