Konstantin Raikin knows full well he is sticking his neck out with his production of "All Shades of Blue" at the Satirikon Theater.

He prints a 21+ sign on the front of the program, indicating that no underage spectators will be admitted to the show. He adds an explanatory note on the back of the program, and goes to the extraordinary lengths of playing a long recorded message before the show begins.

He tells the audience that Vladimir Zaitsev's "unusual play" raises matters not commonly raised on the Russian stage. He explains that the show spectators are about to see is one of "spiritual challenges and goodness." He reminds us that, since we have come to a theater, we are part of a cultural process that demands empathy and understanding.

The topic Raikin feels compelled to defend so strongly, even before an audience encounters it, is that of a young man coming to terms with his homosexuality.

Raikin pushes it to claim no one has addressed this topic in Russian theater. Nikolai Kolyada did it with plays by Konstantin Kostenko and others at Kolyada Theater in Yekaterinburg. I have seen the topic raised in work at Gogol Center, Teatr.doc and other Moscow playhouses.

But Raikin is absolutely right in one sense. This marks the first time that a mainstream theater has embraced the issue so fully.

Let's remember that the Russian government passed a law in 2013 banning the "propaganda of a gay lifestyle" among children. Furthermore, the prosecutor's office singled out Satirikon and "Shades of Blue" two weeks ago when it demanded that six Moscow playhouses answer questions about potentially "pornographic" shows in their repertoires.

Raikin's commitment to the play is doubly interesting when you consider that over the years he has clung extremely close to classic texts. In my 26 years in Moscow I don't believe I have ever seen him stage a contemporary Russian play.

I differ in my opinion about the quality of this text. Formally speaking, I found it common and melodramatic. The story of the teenager struggling with family and friends over his realization that he is gay is told in all the steps and with all the incidents one might expect — the mentoring of the confused boy by a more experienced individual; the disbelief of the boy's parents; the ridicule of his classmates; and the hostility of a "doctor" called upon to cure him of his "ailment."

It's very much the kind of real-life play that takes a true story and organizes it in dialogues and scenes.

Raikin also talks in his introductory remarks about how much the entire crew of the production fell in love with the play and how they all worked on it with such excitement and conviction. 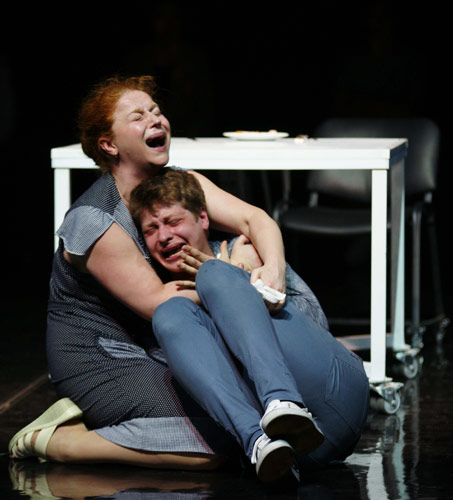 Here again, I saw in many of the performances a lack of nuance and measure that I have come to expect from the company at the Satirikon. The performance of "All Shades of Blue" is often shrill and over the top, although Nikita Smolyaninov is always smooth and winning as the young man standing up to the world.

I trot out all these complaints in detail for a specific purpose. Because it allows me next to say how none of my criticism matters in the least by the time this performance reaches the end.

This is simply a kind of theater that the Satirikon usually doesn't offer. Raikin doesn't aim to entertain us here, or even to impress us with his artistic prowess.

In "All Shades of Blue," Raikin challenges his audience to step outside its comfort zone — like he and his company did — and to think hard about the injustice and cruelty that contemporary society visits upon some of its members.

It is an extraordinary departure for the Satirikon, and it works. At the performance I attended I would guess that 785 of the 800 people packing the hall leaped to their feet to offer the cast a thunderous, standing ovation.

I am accustomed to seeing satisfied audiences at this great theater. But this was different. This audience was deeply moved and grateful. As was I.