The Pushkin Museum is currently hosting an exhibit dedicated to Alexander Calder, the American artist and pioneer of mobiles, sculptures that can be moved by hand or by electric motors.

Calder's grandson and the head of the Calder Foundation, Sandy Rower, was in Moscow last week where you could see him walking around the halls of the Pushkin Museum, sporting some impressive jewelry made by his granddad. Rower came for the opening of the Calder retrospective exhibition, which he also curated.

How well did you know your grandfather?

He was actually a very gruff person, he wasn't this clown that you see in the movies. He'd be that way for 13 seconds for some news thing and then he'd be this super-focused, super-serious person after that.

So being in the studio with him, if I were to take some of his materials or his tools and start to make something like, you know, I was a kid, so I'd want to make a sword or something like that, then he was very enthusiastic and he would show me how to hold a chisel at the right angle, cut a sheet of steel with a hammer and be efficient with the material, not to waste material. If I wasted the material that would really piss him off.

But he loved having me around, me and my brother and our cousins, all four grandchildren. We had tremendous access to understanding his wisdom about the creative process and its directness. He never had a studio system, so the direct process for him was always through his hands.

What is your fondest memory of him?

I was in his studio once. I was very young, maybe 5 years old and I saw a sculpture. I knew it was a sculpture because I'd seen it before. It was a very early sculpture, a pre-abstract sculpture of a horse rearing up, made of one sheet of brass that he cut and folded, almost like origami. And I said to him: can I have it? And he looked at me and I could see that he was thinking that I thought it was a toy. And I totally recognized it as a sculpture, I wanted to put it up on a shelf in my room and enjoy this beautiful horse. But he looked at me said no, you can't have it. Because he thought I might dance it around like a horse, not understanding that it was a sculpture. He said no but now I actually have it [laughs].

In a certain weird way that was the beginning of the Calder Foundation because of my deeper understanding of his work — and growing up so intensely with his work. My own involvement with his work is a lifelong process. I'm 52 now, but it's still a process of discovery. 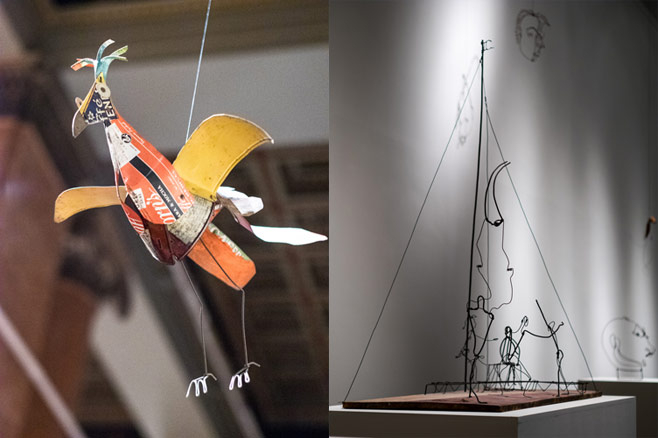 Calder is known as the creator of the mobile, a type of kinetic structure.

How did you come up with the idea for the foundation? It was quite novel at the time, right?

I began it in 1987 and at that time in America there wasn't a tradition of single-artist foundations. There were a couple, but they were really home-based foundations, like there was a home where an artist grew up. But they didn't really have lots of works of art or work to protect their legacy or disseminate information about the artist.

I had the idea that my grandfather needed first an archive, because there wasn't an official archive at the time. There were all these different dealers and people who had their own archives and I wanted to bring them all together so that curators would be able to work from a definitive collection of his works. So now we have an archive of 22,000 or so works of art in all media, including the drawings and jewelry. So that was the original purpose of the foundation. But now exhibitions have become the primary focus. Right now we have seven exhibitions in different parts of the world.

What about establishing an actual museum?

I have never had the idea of my own devoted museum. We are thinking more in terms of a study center with an archive and a depository of works of art, plus a small space for exhibiting works of art. But I never meant to create a functioning museum.

From what I understand, the Moscow exhibition was initiated by the Pushkin Museum?

Is this your first visit to Moscow?

This is my second visit. I was here, I think, seven years ago. Moscow's changed a lot in seven years, in a very good way. In fact, in two specific good ways. I am no expert, but my sensation then was that there were unhappy people and then the other people that drove around in fancy cars and were super flashy, very showy. And now, I don't see all the flash anymore and people seem to be generally happier, maybe not at this moment, I don't know, but that's my experience. There's more going on, there's great restaurants, and I've had great food while I'm here. Before it was just Cafe Pushkin, not very inspiring.

What about the art scene in Moscow?

Well, seven years ago it would have been impossible to do this exhibition. Today the support is tremendous, it's totally different. It used to be that Larry Gagosian would bring a Jeff Koons here and try to sell it to a billionaire, and now there's support of the local scene. Before I didn't feel support of the local scene. I met artists, I met architects, culture people, intelligentsia, when I was here before and they were generally not too happy with the lack of support, lack of recognized identity. And now I feel that's changing and I think that's super positive.