Contribute Today
By Matthew Bodner
May 28, 2015

In 2010, Robert Pszczel arrived in Moscow to head up NATO's Information Office, a small outpost set up in the confines of the Belgian Embassy with the charge of promoting the 28-member transatlantic military alliance as a peaceful partner in global security.

At that time, NATO and Russia seemed to be getting along. The year before, the two sides had hashed out an agreement to let NATO equipment transit across Russian airspace to support the international combat mission in Afghanistan and joint exercises were held.

For Pszczel, a Polish national who has worked with NATO since 1999, the future seemed bright.

"We were striving, as the formulation goes, toward a strategic partnership [with Russia]," he told The Moscow Times in an interview in his Moscow office.

But in the last two years, as Moscow's attitude toward the West has taken a dramatically negative turn, Pszczel's job has become something of a nightmare. Russia's Defense Ministry does not return his phone calls and, on at least one television show debate, he was derided as a "Russophobe."

The Moscow Times sat down with Pszczel to talk about how his job has changed since arriving in 2010, the nature of Russia's anti-Western fervor, and prospects for the future.

Q: What are your responsibilities as the head of NATO's Information Office in Moscow?

A: We try to engage with Russian society, journalists and think tanks to essentially answer any questions about NATO. Usually I would say maybe half of the questions are what NATO is about, and the other half are what NATO is not about, because there are just so many myths.

When I came here in December 2010, we were sort of at the peak of NATO-Russia relations. We had quite a successful [NATO] summit, and we were striving, as the formulation goes, toward a strategic partnership [with Russia].

Unfortunately, today we are pretty far away from that goal, and that is due, of course, to what happened in Crimea — its annexation by Russia, Russia's role [in the Ukraine crisis], its political and military support for the separatists. So we do have a problem.

Having said this, the tasks of the office which I have the pleasure of leading have not changed.

[But] the truth is that this job has become more difficult over the last year to year and a half, because it's difficult for civil society here [in Russia].

Q: How has your job become more difficult over the last year and a half, as NATO's relations with Russia crumble?

A: To put it bluntly, so many organizations and people are a bit reluctant to engage with us because they get into trouble. It's sad because we aren't trying to impose any views on anybody, but we certainly try to be part of a debate, and debate is necessary.

We try to do that job [encourage debate], but it has because no doubt very difficult for, let's say, political reasons related to NATO-Russia relations, but also because of the difficulties in civil society itself.

Q: What would you say your major challenges are to promoting the message that NATO is not Russia's enemy?

A: Well, to put it very mildly, there's no question that there's an outpouring of negative things [in the Russian media], myths about NATO in particular. NATO stands accused of everything under the sun. It's easy! It's a political football. You can kick it and it doesn't cost anything.

So, there are a lot of these old [Soviet-era] myths and new myths, and sometimes before getting to a real discussion you have to break those myths and say: "No, this is not how things are done."

For example, one of the most ingenious myths from the point of view of geography is that NATO has surrounded Russia with bases. I mean, Russia has about 20,000 kilometers of borders, and the border with NATO countries is only about 1,200 kilometers long, so how on earth are we supposed to do that?

So this is a big problem because there is a certain mind-set [to overcome]. People primarily get their information — particularly about foreign affairs — from television. Just switch on the [state-run] channels in Russia and you hardly ever get anything positive. You just get this caricature, a sort of demonization of NATO.

Usually, it is very difficult to start a discussion, because you can spend the entire time refuting myths.

Also, public opinion polls show things that should worry everybody: the U.S. and other NATO countries are considered to be a threat by the majority of Russians. … How did this come about? There is no basis for it, so it's pretty serious stuff.

Q: Are you invited often onto the state-run channels to argue and debate?

A: I am, but it's not usually the most pleasant experience because the way debates are conducted are a bit different from what is considered a normal debate in our countries. Usually, if you have an anchor, he or she is supposed to be neutral, right? Well, that's not the case here.

Also, the balance of the debate is usually odd because sometimes you get like 10 people more or less at the same time shouting at you, so clearly they are not on your side nor are they really independent commentators. And very often there are some liberties taken with the topic. 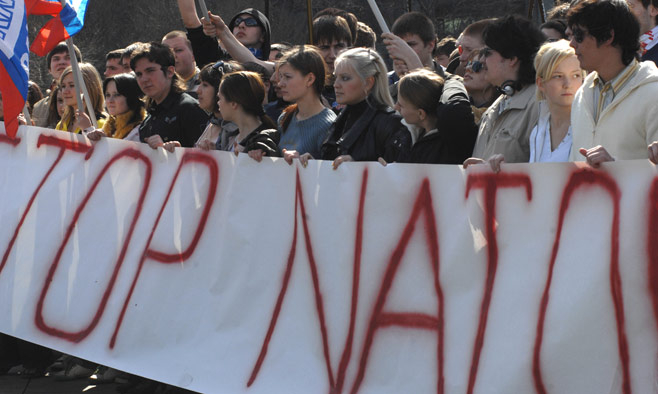 Marchers protesting against NATO expansion at a Moscow rally in 2008.

Q: I've noticed that you have quite a large collection of anti-NATO propaganda here in your office. Why do you keep this collection, and how has this type of propaganda evolved in Russia since the Soviet-era?

A: Frankly speaking, I like humor. I started collecting these old NATO caricatures because when I arrived here I felt that one needs to preserve something, some history. These are really history — we were entering a new world, and this was bygone.

[But], interestingly, in the last year to year and a half, I've started seeing some new productions of the genre. The evolution, in my humble view, is that they seem to have been more professional [in the Soviet Union] than the guys today.

This maybe isn't surprising, because it was a whole industry back then. [There's] not yet a [new] industry of anti-Western and anti-NATO propaganda, but there are some major efforts being made.

Apart from the stuff you see in the newspapers, etc., I've noticed that it's become almost a normal thing to go to a tourist shop and see little anti-NATO and anti-Western things.

That's kind of a bit odd, but it tells you about the atmospherics of the country — which frankly does not fill me with great joy. Humor is one thing, humor is good, but these caricatures tell a story.

Q: And where do you see the story going?

A: Well, the story is that somehow, somebody seems to find it convenient to create this image of Russia as a country surrounded by enemies with [a] few exceptions. I think that, first of all, this is a very false picture. Second, it is dangerous to create this image because it is not based on truth, and it builds animosity.

I don't even want to develop the thought of how one special neighboring country, Ukraine, is being portrayed. On one extreme, we hear that they are [Russia's] brothers and sisters, and on the other hand we keep hearing every day that they are some kind of Nazis, hell-bent on the destruction of Russia.

This is very dangerous because this is how you essentially build hatred. Ideally, they should stop! Nothing good comes out of this. These negative images imprint themselves in your head, and they actually prevent you from seeing the other side, from developing normal relations.

So it's not an innocent issue to be taken lightly. It is quite serious.

Q: Have you been forced to step up your efforts to combat this?

A: We would love to step up the efforts if we had the resources, but the truth is that I don't have any illusions that the humble NATO Information Office can change this. This is up to the Russians, and we would very much love to see a different narrative, we would like a different [style of] engagement, and we would certainly like to see more real debate.

Russia is a great country which deserves a great debate. When you switch on the TV in particular there is hardly a debate. You just get five people telling you exactly the same story, usually a very negative one, and that doesn't help because the world is much more complicated than that.

And you know, the irony is that we stand accused of so many bad things, but in reality we — all the allies of NATO — would like to return to the path of cooperation with Russia. But Russia has to want to come back to that path, and that's a problem at the moment.

Q: Five years after taking this job, do you have any regrets?

What I particularly regret is that we spent a lot of time advertising NATO-[Russia] cooperation, [rather than] informing about NATO, advertising NATO if you like. [But] I really loved doing this [promoting NATO-Russia cooperation] because it opened a lot of eyes, not just here but in NATO countries as well, and unfortunately that is no longer possible.

Q: And you are leaving your position this year?

A: I think it is certainly the case that these are my last months here. I think I am probably the longest-serving head of this office. The office will of course continue its work.

Q: What advice will you give your successor?

A: Well … keep cool! Don't expect too much, but work to achieve as much as possible. Keep a sense of humor, and try to see Russia from all angles, so to speak. It is a great country, and you meet wonderful people, but he [the successor] will also be faced with unpleasant situations. So try to sort of be able to distinguish between the good bits and the not-so-good bits.

In the 1990s, Russia was "probably the freest place in the world" to be a foreign media entrepreneur, said Derk Sauer, the Dutchman who built a Russian...
news

On one side of Ruben Vardanyan's open-plan office hangs a wall-size photograph of an Armenian mountain panorama. If you look closer you can see —...
Off air

A St. Petersburg court on Tuesday recognized the Russian human rights NGO Vesna as an extremist organization, the group announced in a statement, a move...