In the 1990s, Russia was "probably the freest place in the world" to be a foreign media entrepreneur, said Derk Sauer, the Dutchman who built a Russian media empire.

Now, under President Vladimir Putin, that freedom is disappearing. Media law is tightening as the Kremlin promotes its brand of patriotic, pro-government news — a project that has accelerated since Russia's annexation of Crimea from Ukraine last year sparked an information war with the West.

Sauer, 62, came to Russia at the end of the 1980s in the final years of Soviet authoritarianism. He sees a lot of similarities between 1989 and 2015, but one big difference.

"Then the barriers were going down and now they are going up. That's the story in short," he said in an interview.

A steady flow of new laws have pinched the edges of media freedom in recent years, and state media outlets have risen in power and scope. In what became a symbol of growing interference in independent media, Putin last year signed into law legislation that limits foreign ownership in Russian media businesses to just 20 percent by 2017.

Foreigners built large swathes of Russia's media market and still own majority stakes in tens of magazines, newspapers, radio stations and television networks. The law, which was passed as the West and Russia imposed economic sanctions on one another over Ukraine, sparked fears of forced fire sales to Russian owners willing to kowtow to the Kremlin.

Some commentators said the legislation was aimed at the most critical media — the Russian version of Forbes and newspaper Vedomosti, which was owned by Finland's Sanoma, Britain's Financial Times Group, and Dow Jones, the U.S. publisher of the Wall Street Journal. Sanoma has since sold its stake to a Russian businessman.

The Moscow Times, which Sauer founded in 1992 and used as a base to build a major newspaper and magazine publishing business, was also affected. The paper was recently sold to the same businessman that bought the Vedomosti stake, Demyan Kudryavtsev.

Sauer is currently chairman and president of Russian news agency RBC, which operates on television, Internet and in print and is owned by Russian billionaire Mikhail Prokhorov.

Large and well-established, RBC is still making money, he said. His vision for smaller independent media working in Russia is bleaker.

Q: Why do you think the 20 percent cap on foreign ownership of media was passed?

A: There's a huge amount of speculation about that. All completely different explanations. Some people claim it's to hit Vedomosti and Forbes and so on. I doubt that, to be honest.

And it was more or less convenient. Don't forget that it started in parliament with debates about Cosmopolitan and how it stood for Western decadence. I think it had to do as much with the anti-glossy movement in the Duma as it had to do with Vedomosti and Forbes.

Q: If it's contingent on the current political mood does that mean it could be reversed?

A: Oh yeah, it can be reversed any day. I am sure. But it depends on what is happening. You could be back to normal sooner than people think.

That's the only good thing about Russia: Nothing is forever. We think now we're deep in the pit, but it can change. It can also stay like this. Or it can get 10 times worse. You just don't know.

Q: But assuming that the law does go into force as planned in 2017, what will the effect be on the Russian media market?

A: Not much. For the magazines it's pretty easy to circumvent because of the license holders. So the brand name is owned by a foreign company. Instead of having a formal operating company here they'll just license it out and receive the money through a license.

A: No. They already worked it out. It's not such a big deal for the magazines.

For the newspapers — for Vedomosti — it's complicated. Because with the FT, Wall Street Journal, they are either going below 20 percent — they have to find a solution. Which also is doable. If they want it. The question is do they want it? I don't know.

Q: In the 1990s you came to Russia and set up your own media company. Would you want to do the same now? Would you be able to?

A: No. But not just because of the political situation. It's for many reasons. The underlying trend, which is much more important business-wise [than the political situation] is the shift to digital. The company that I built in the early 1990s, based on print and magazines and so on, is impossible to replicate today.

A: One very limiting new thing is this new law on foreign ownership. Already there it is impossible to repeat what I have done before, because in 1992 we started our own business and we owned and controlled it. Now you cannot even start as a foreigner your own media business and own it and control it.

If some Russians come to me — I would say just a classic media company is difficult. But if you look internationally, at what a company like Vice is doing. What other new startup companies are doing. That is interesting. I'm sure that sooner or later young people will come that find a much more image-driven solution. This is the future. [A type of] Russian BuzzFeed.

Of course there are possibilities. But you have to be really a digital native for that. You have to understand how it works.

Q: You are both a businessman and an advocate of independent journalism in Russia. Which of those is more important to you?

A: I strongly believe that one needs the other. If you really want to be independent you need to make money. Because otherwise you are always dependent on someone else. That's why I always try, in any business I was involved in, to make it a profitable business. 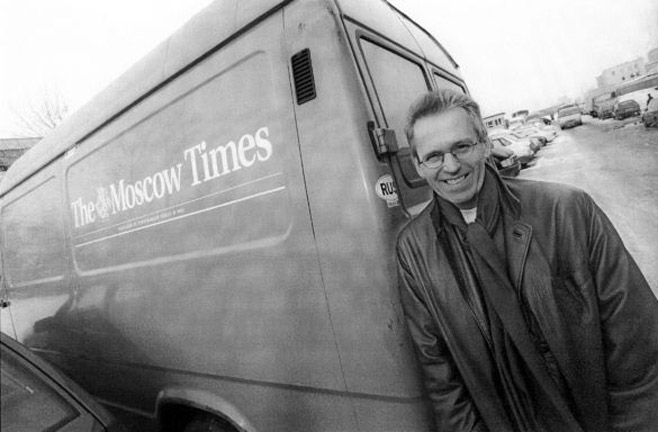 Former owner of The Moscow Times Derk Sauer visiting the paper in 2001.

Oligarchs Out, State In

Q: How has the media landscape changed over the past two decades?

A: When Putin came in nothing happened. In the beginning he was quite liberal. What Putin brought in was perceived as more order, more clarity on the legal side. Less wild types around, street mafia. It was all received pretty positively.

Q: When was the best time to make money in Russian media?

There was the crisis in 1998, and it took about a year and a half to recover from that, and then from that moment to 2008 was the heyday of Russian media.

It was very profitable. You had to be really dumb not to make money at that time, because it coincided with the explosion of the consumer society in Russia. All the companies came, everyone had money. All the shops opened. New watches, new products. And they all needed media to support them.

Now it's much more difficult [to make money]. Many things happened in the meantime. One is the shift to digital, which is a worldwide phenomenon. Newspapers and magazines find it much more difficult to operate. Secondly, there are specific Russian trends that have to do with the economy and the fact that media is again under state control so it is not an open market any more.

Q: When did it come under state control?

It really accelerated after the reelection of Putin [in 2012]. This is what gave the big push. And then the Maidan protests in Kiev [in December 2013] and everything that happened around that. That really changed dramatically the landscape for the media.

Q: Why does that make it harder to make money?

Because there is not a level playing field at all. Because state media have unlimited resources, whether it's [television station] Rossia-24 or state newspapers, state-supported media holdings — how do you compete with these guys? In terms of cost of content, but also — they also control the advertising market, especially on television. They have unlimited resources — they don't need to make money.

Q: I was recently taking to a taxi driver in Crimea about truth in the media. He told me: 'Russian TV channels bend the truth, Ukrainian TV channels exaggerate the truth — If there's one thing that's true in this Crimea situation, it's that you'll never find where the truth is.'

A: That's a huge problem. People don't talk a lot about it, but it's a very big problem globally. The standard of journalism is so confused because of all these propaganda wars. And also because what is perceived to be the authority has been discredited so often that no one believes in any authority any more.

Twenty years ago if the chairman of the Central Bank of a country said something, you assumed that this is the chairman of the Central Bank so he must be right. But after all the financial crises we know they just talk bullshit. If the head judge of a country says something, now we know that many head judges are corrupt, not just in Russia but all over the place. If the Pope said something — well, now we have a more or less OK Pope.

But you know, all the traditional pillars of authority that were always quoted in the news media when I grew up have been discredited. That is why you have no idea who to believe any more. And this creates extremely fertile ground for the Russia Todays and the Fox Newses and all these weird forms of journalism.

Correction: An earlier version of this article said Derk Sauer was CEO of RBC. In fact, he is the company's chairman and president.

The first Russian owner of The Moscow Times in its 23-year history said Monday he saw "huge potential" for developing the brand.
news

The media freedom representative for the Organization for Security and Cooperation in Europe (OSCE) said Wednesday that a new Russian law banning...
news

Russia's Media Offensive Seen by the West as Real Threat

International investigators said Wednesday there were "strong indications" that Russian President Vladimir Putin personally approved the supply of the...