Hennessy cognac had a choice, chairman and CEO Bernard Peillon said, when celebrating their 250th anniversary this year: do a conventional exhibit linked to their vast archives or do something different.

What is currently on at Novy Manezh is certainly different. Eleven contemporary artists, including Dutch photographer and filmmaker Anton Corbijn, from all over the world have been hired to create works inspired by the cognac company.

"We have been in Russia since 1818 so there was no hesitation we had to come to Russia to celebrate the history," said the brand's global ambassador Maurice Hennessy, who hobnobs as easily with the Russian rich as he does with rappers — Hennessy is big in the rap world — in Los Angeles.

Maurice Hennessy, who is a direct descendent of the founder Richard Hennessy, an Irish soldier serving in the army of French King Louis XV, was speaking at a news conference Monday to launch the exhibit in Moscow.

The exhibit, which only runs till Sunday, also saw a gala dinner for Moscow celebrities and talks during the week by some of the artists. The exhibit has already been shown in Guangzhou in China and will go on to New York, Johannesburg and Paris

One of the first pieces visitors see is "A Tale of Two Families" by Charles Sandison in a room with a mirrored ceiling and walls that at first seem to have random shapes and dots projected onto them. Then an image of an old parchment appears, part of the Hennessy archive that tells of the Hennessys and their master blenders, the Fillioux family, who have worked together for more than 200 years.

"It's a very live piece. When you enter the work you become part of the work. Some of the pieces will be beamed onto you," said curator Herve Mikaeloff. "Everything you see, you will see in only one way. If it appears again it appears in a different way."

Each one of the artworks is inspired by the Hennessy house in direct or less than direct ways. Corbijn, whose most recent film was an adaptation of John Le Carre's "A Most Wanted Man," has a series of portraits of Hennessy staff, such as the wine-grower, the distiller and cooper, on display. 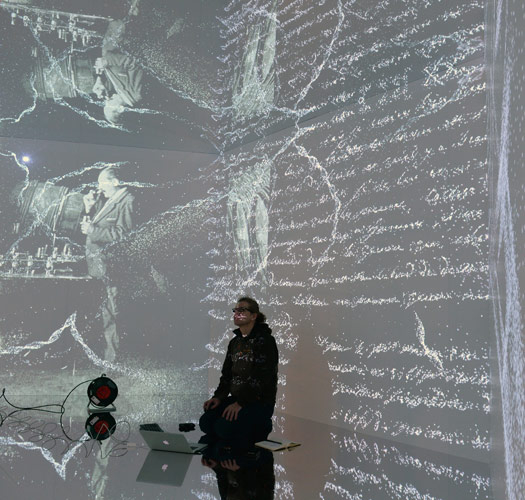 "A Tale of Two Families," an installation by British artist Charles Sandison.

The most unusual artwork is a 3-D video piece called "From Land to Savoir Faire" by French artist Pierrick Sorin, where he dresses up in a blue cat suit that covers his whole body and his head along with two other characters, also played by him, and explains how Hennessy cognac is created.

Hennessy CEO Peillon would not say which work he preferred: "[I say] 'I have six children' when I am asked 'Which one do I prefer?'" he said.

"These days there is nothing that I hate enough not to want to be here. I feel very comfortable," joked Peillon. "The judgement of the press and of our peers is enough pressure without having to tell you which one I prefer."

"That's what contemporary art does, it pushes you, it challenges your mind," he said.

The decision to have Moscow as one of the five stops on the tour to Russia was made before the crisis in Ukraine, the sanctions that were imposed against Russia and the current parlous state of the Russian economy.

"The current environment is not the most conducive to a booming business," Peillon told The Moscow Times. "It's not a booming business. We see some erosion but not to the point of folding the company and thinking that all is lost."

"It remains at a level where we believe that it is a solid ground so unless something dramatic happens … our confidence remains, we are here for the long term."

When asked how much Hennessy the artists got as part of their work, Peillon laughed and said: "We are very generous as that is what we do. That is the nature of our trade. … Everything is done in appreciation, quantity does not come into it."