Contribute Today
By The Moscow Times
May 7, 2015

An unassuming Irishman living in upstate New York, my grandfather Joseph Burke never expected to find himself embroiled in an elaborate scheme aimed at fooling Adolf Hitler into thinking the United States was preparing to invade Europe via a series of false entry points. But in the spring of 1944, he was doing precisely that as a member of General George Patton's Ghost Army.

The oldest son of a widow, Burke was under no obligation to enlist in the U.S. armed forces, but as the world's superpowers slid further into crisis, he was driven by a sense of duty to do so.

In September 1942, Burke enlisted in the U.S. Army's Signal Corps Reserve. He was sent by the Army to a prestigious polytechnic institute to attend electronics courses shortly thereafter, and was called into active duty in July 1943.

By early 1944, Burke was in England, putting his newly developed electronics skills to the test as part of Operation Fortitude, a large-scale deception aimed at misleading the German top brass into thinking the United States would invade from various entry points in Europe, as they in fact prepared for the June 1944 D-Day landing at Normandy, a decisive turning point in the war.

The meticulously planned deception involved keeping a skeleton decoy force generating ceaseless and frantic radio communications and truck traffic, as well as using props such as inflatable fake tanks to create the illusion of hundreds of thousands of troops massing for the real invasion of Europe at some point other than Normandy.

After the D-Day invasion, Burke remained among the ranks of Patton's division as it rolled across Western Europe, serving in France, Belgium, the Netherlands and Germany.

Rushing to the Battle of the Bulge in late 1944, Burke was involved in a truck crash. He was hospitalized, but regained his health in time to be shipped off to the Philippines upon release.

Once in Asia, Burke promptly began training to participate in the United States' impending invasion of Japan. After the enormous casualties taken in the Battle of Okinawa, everyone training alongside Burke remained convinced they would be killed in Japan.

Burke would later recall hearing the news that the United States had dropped the atomic bomb over Hiroshima. Some of his fellow troops wept with joy upon hearing the news, realizing the invasion would no longer be necessary, and that their own deaths were no longer imminent.

Years after the war, asked if he'd ever met General Patton, a reputedly terrifying figure, he'd say in all sincerity, "No, thank God."

Burke was honorably discharged from the Army in January 1946, once hostilities had ground to a halt.

After returning to the U.S., he attended university and began a three-decade career as a postal worker. It was around that time that he married a similarly unassuming Irishwoman, also a first-generation New Yorker, and began a family of his own. 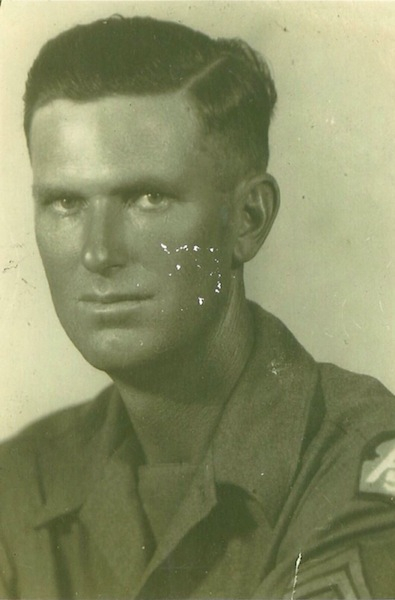 For the first three decades of his life, my grandfather Hubert Daniel was a dirt-poor sharecropper in rural Texas.

He first attempted to join the military and thereby escape poverty as a teenager, but was turned away. At well over six foot tall, he was too tall to fit into a standard uniform, and the recruiters informed him that the government was not in the business of haute couture combat gear.

After the attack on Pearl Harbor in 1941, they changed their tune.

Daniel joined the army at 27. After completing basic training, a Texan farm boy who had never finished high school found himself fighting on the front lines of Italy and North Africa under General George Patton. It was in North Africa that he "got his legs shot up," as he used to tell it.

He survived the attack, but was out of commission as a fighter, and was shipped off to England to undergo treatment.

During the course of his lengthy recovery Daniel fell in love with a British nurse. Though their romance was cut short by his return to the United States, the two exchanged letters for years after the war's end, letters he kept until his death in 2001.

Returning to civilian life, Daniel found himself reluctant to head back to the farm. He took up a day job as a milkman, moonlighting as a country Western musician, a gig that ultimately led him to tour the country.

It was during these years that he met his future wife while playing a concert in a small Oregonian town.

Still poor, but young and in love, the two relocated to Los Angeles, where they started a family in Rodger Young Village, a shantytown allocated for veterans' families. Daniel took a job with the Lockheed Corporation, the aerospace company that would ultimately become the famed Lockheed Martin.

Lacking though he was in a formal education, Daniel was highly skilled in model building, a talent that led him to Lockheed's Skunk Works, a shadowy development department legendary in the history of U.S. military aircraft. Skunk Works routinely developed advanced aircraft design at breakneck speed.

Daniel worked on the SR-71, a long-range reconnaissance aircraft that still holds the world airspeed record in its class. He was unable to speak about his work on the SR-71 for decades due to the project's high-level classification.