YALTA, Crimea — "Who do you think is responsible for the war in eastern Ukraine?" asked Masha, a 17-year-old student at School No. 12 in Yalta, Crimea.

A gasp went around the classroom. Masha looked at me as if I was mad. "No way," she said. Twenty students shifted in their seats with astonishment. The teacher shot me a "didn't-I-tell-you" look. It took a moment for calm to return.

Masha is from Donetsk, the war-torn capital of one of the separatist republics in eastern Ukraine that is reported to have received weapons from Russia to fight the Ukrainian army. She is just one of hundreds of children who have moved to the seaside town of Yalta from the conflict zone in the past year, many of whom consider themselves the victim of Ukrainian — not Russian — aggression.

I started explaining the view, common across the West, that Russia's interference in eastern Ukraine and annexation of Crimea last year were illegal under international law. But Masha and her classmates didn't see it that way. They were afraid of the Ukrainian nationalists that they said brought war to the country's Russian-speaking east, and they saw Russia as a defender against that nationalism.

When I argued that Russia has no place in Ukraine or Crimea the group's teacher clenched her fists and ground her teeth in frustration. She looked at the ceiling for strength and said: "Russia is the motherland of Crimea."

The room burst out in applause.

'Will They Give Us Chalk?'

The conversation is one of many I had during several days at School No. 12, which is housed in a 19th-century colonnaded building just off a pedestrian street near Yalta's tourist seafront.

Just over a year ago School No. 12 was Ukrainian. Aside from a classroom filled with computers and some very trendily dressed schoolchildren it looked much as it must have done before the fall of communism, with long corridors, cork boards on the walls and a teaching staff of mostly middle-aged Soviet-born women.

Head teacher Olga Cherkashchenko sat in a high-ceilinged room filled with heavy 1970s wooden furniture. She looked out from a low-cut black fringe with big eyes and described the underfunded Ukrainian educational system.

A clunky-looking laptop sat on the table. Parents bought that too, Cherkashchenko said. Her office did not have a desktop computer.

Ukraine has a dismal economic record during its quarter-century of independence. Plagued by corruption, criminality and poor governance, its economy lagged behind those of neighboring states like Russia and Poland. Outside small pockets of wealth, Crimea's poverty shows in ramshackle farmsteads and pitted roads. When it joined Russia it instantly became one of the country's poorest regions.

Yalta, a famous tourist destination sandwiched between the Black Sea and a semi-circle of mountains, is better-off than most. But even here salaries average a little over $200 a month.

I asked the class of 17-year-olds what has changed since the annexation. They shouted out: free medicine, better teacher salaries, more school equipment, more police, more holidays, no aggression from Ukraine.

I asked what has got worse and got a long pause. Then: prices have gone up, Russian state exams, no travel.

Life has become harder for many people since Moscow annexed the peninsula. A Ukrainian economic blockade and Western sanctions have caused prices of many products to double and halved the number of tourists that are the key driver of Yalta's economy.

Foreigners in Crimea must carry a huge wad of cash because Visa and MasterCard don't service payments on the peninsula. I tried to download an app but couldn't — the network is blocked. Crimeans applying for visas to travel to Western countries are routinely refused.

But almost everyone I met in the city supported the annexation, even if they are unhappy about some of the economic consequences.

People are grateful for peace. They point to eastern Ukraine, where Russia did not annex territory and over 5,000 people have been killed. 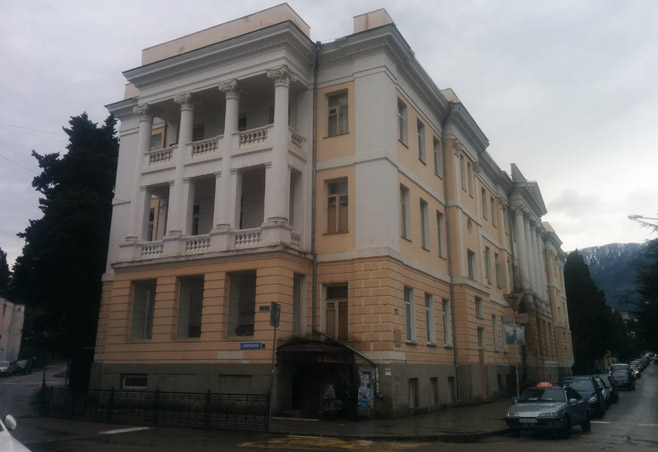 Just over a year ago School No. 12 was Ukrainian.

On my first day at the school, teacher Yelena Dvoryaninova warned: "You should be careful about what you ask them." There is peer pressure, she said — children with nuanced or pro-Ukrainian opinions are uncomfortable about speaking out.

That goes beyond the classroom. Why would you bother making trouble? Dvoryaninova asked.

Many ethnic Ukrainians or those who support Ukraine have left Yalta since the annexation. Many people have lost friends. It is harder to travel to Ukraine and more expensive to call. Amid aggressive propaganda on both sides, some have been divided by politics, with former friends branding one another traitors.

While the majority welcomed Russian protection, some people in minority groups like Crimean Tatars and Ukrainians feel vulnerable to Russian authorities that are often heavy-handed and intolerant of different opinions.

Near School No. 12 is a university. On the metal plaque next to the university's door, the yellow and gold national symbol of Ukraine had been blacked out with paint.

In a university class, students said most of their Ukrainian classmates had quit their studies halfway to return to the mainland. One of the lecturers said the head of the university had left behind his position and his family for a bedsit in Kiev out of refusal to live in occupied territory.

"But I am happy because I live in freedom," he had told her.

The First People on Earth

Most of the schoolchildren I spoke to said they had more opportunities now that they are in Russia. Many wanted to go to university in Moscow or St. Petersburg, and they can now apply for free tuition. Some saw business opportunities in Moscow, though others wanted to live in Europe or the United States.

But the teachers said the real revolution was in a broader curriculum — Crimea's children have been liberated from a deadening focus on Ukrainian literature, Ukrainian history and Ukrainian geography.

"Sorry, but what literature?" asked Dvoryaninova. "Who do they have?" She looked at me with raised eyebrows. Beyond 19th-century poet Taras Shevchenko, I knew no one.

"Children knew more about the works of [Ukrainian writer] Panas Myrny than they knew about those of Stendhal or Hugo. They wouldn't even have recognized those names," said Cherkashchenko, the head teacher. The same applies for history, where Peter the Great may get less attention than a Ukrainian peasant movement.

The new curriculum will expand the horizons of schoolchildren, said Cherkashchenko. Russian history and literature are world-spanning and world-shaping, while "[Ukrainians think] the first people on earth were Ukrainians," according to Dvoryaninova.

And then there is language. Language has become a political flashpoint in Ukraine. Kiev's efforts to elevate Ukrainian above Russian as the country's dominant language were used by separatists to justify taking up arms. Russian President Vladimir Putin has pledged to defend Russian-speakers beyond Russia's borders.

Ukrainian is rarely heard in Yalta, yet under Ukraine's education system "much more time was dedicated to [studying] Ukrainian than Russian," Cherkashchenko said. In Ukrainian regions that lack the autonomous status given to Crimea almost all schooling is in Ukrainian, and parents of ethnically Russian children sometimes complain that their Russian-speaking children make grammar mistakes when they write.

If Crimea stays in Russia, knowledge of Ukrainian will fade fast.

In School No. 12, the Ukrainian language is now optional. About 40 percent of students have stuck with it, Cherkashchenko said. But most of these are in the older classes, where students have already studied the language for years. In the youngest grades, less than ten percent want to learn it, she said — their parents don't see the point, when Russian and English are global languages.

A class of 15 year-olds told me a story that I heard everywhere in Yalta.

It goes like this: In the days after former Ukrainian President Viktor Yanukovych fled Kiev's street protests in February last year the chaos that had gripped the capital began rippling out across the country. Fascist militants from nationalist western Ukraine that had played a decisive role during the protests headed east and south. One of the children, Sasha, called them "crazy Ukrainians." A trainload of the thugs arrived in Crimea's capital, Simferopol. There, they were met by self-defense forces, groups of locals, many of them ex-servicemen, that had appeared from nowhere. Television news showed hundreds of them carrying sticks and shields painted in the colors of the Russian flag waiting at the station. The militants — though this bit wasn't shown on the news — were prevented from disembarking and forced to turn back.

The self-defense forces quickly took control of the road and rail crossings into Crimea from the Ukrainian mainland, the story continues, but they would have struggled to defend the peninsula from attack. The threat to Crimean lives ended only when Russian troops left their bases and seized control of the peninsula.

I asked the class about Ukraine's current president Petro Poroshenko, who oversaw Kiev's military efforts to pacify the country's eastern regions after winning an election in May last year in which candidates from extremist Ukrainian nationalist parties received around 2 percent of the vote.

Sasha said: "Poroshenko is the craziest Ukrainian I have ever seen. He doesn't even try to stop the war."

Prime Minister Dmitry Medvedev on Tuesday compared Russia's 'historic' annexation of Crimea to the reunification of Germany in 1989.
as resources allow