The ruble's sharp decline is exacting a toll on Southeast Asian tourism as Russians think twice about doubling their budgets for their next beach holiday in Vietnam, Thailand or Cambodia.

The ruble fell 43 percent last year against the dollar, hurt by plunging oil prices and Western sanctions imposed over Moscow's role in the Ukraine political crisis. A Russian tourist now needs to fork out as much as 140,000 rubles ($2,479) for a trip to Vietnam, including plane tickets and accommodation, up from 60,000 rubles last year, a state-run Vietnamese newspaper estimated. For those who do make it to Vietnam, they are buying instant noodles instead of eating out, local media reported. 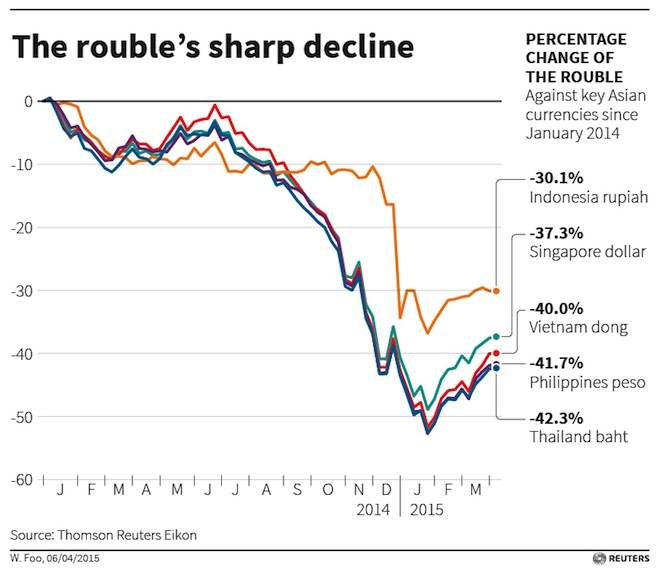 Russians account for billions of dollars in tourism revenue in Southeast Asia and rank second after Chinese travelers in number. Food menus in Russian are ubiquitous in Phuket. Street vendors in Vietnamese beach towns have picked up Russian words. In 2013, when Russian tourist arrivals in Vietnam more than doubled, national carrier Vietnam Airlines launched direct flights linking Moscow with the former U.S. airbase in Cam Ranh near the popular coastal town of Nha Trang.

From January to March, some 95,800 Russians visited Vietnam, down 27 percent from a year earlier and the first quarterly fall since 2012. Cambodia's Tourism Ministry counted nearly 18,300 Russian tourists in the first two months of 2015, down 51 percent. Thailand drew 1.6 million Russian tourists in 2014, down 8.6 percent. Arrivals slumped 46 percent in January this year. In the same month, Russian visitors to the Philippines dropped 12 percent.

"Russian tourists have been steadily declining in Thailand since last year particularly because of the depreciation of the ruble," said Surapong Techaruvichit, president of the Thai Hotels Association. "Destinations that have traditionally been popular with Russians, including Phuket and Pattaya, have been hit hard."

Tourism industry website TripAdvisor recently ranked Moscow fourth on its list of "15 destinations on the rise," and the Moscow government will invest...
news

For Mariam Matiashvili, Georgia's crumbling tourist trade is a health risk. The 64-year-old woman spends much of her meager pension of 150 lari ($68)...
news

Crimea Plans to Make $2 Billion on Summer Tourism This Year

Indonesia, an Asia-Pacific nation of 3,000 islands, will begin letting Russians visit without a visa next month in an effort to boost tourism, the Jakarta...