Crowds cheered wildly by the Museum of Cosmonautics as 735 balloons were released into the sky, in a tribute to the 735 spacewalks that have been carried out by astronauts from all over the world.

The first and biggest red balloon was released by Alexei Leonov, the first man to leave an orbiting spacecraft and float in space. The balloon had Leonov’s surname written on it with the word “pioneer” written underneath.

Leonov became the first man to float in outer space just over 50 years ago on March 18, 1965 in a feat that required him to overcome deadly danger from start to finish.

As part of the commemoration of Leonov’s spacewalk, the museum, which is in the base of the giant, soaring Soviet monument to space conquerors near metro VDNKh, opened a special section devoted to that first spacewalk and to the history of spacewalks over the last half century.

The exhibition, called “The Abyss Beneath the Feet,” shows where and what astronauts did when they were in outer space, archival documents on the training processes used for Soviet cosmonauts and much more.

“The collection is unique. Even Alexei Leonov will see some of the represented items for the first time,” said curator Tatyana Kalugina, just before she and Leonov cut the ribbon to officially open the exhibition on Thursday.

Leonov’s mission, Voskhod-2, is famous not only because of his successful 12 minute 9 second spacewalk, but also because of the risks he and pilot Pavel Belyayev had to take.

Top Soviet space designers developed a space suit for the walk with an oxygen supply of 30 minutes. Within a few minutes of being in space, Leonov’s space suit began to inflate, making it impossible for him to get back inside the capsule.

Cosmonauts were supposed to report all incidents to control center back on Earth, but Leonov decided he didn’t have time to discuss the problem.

Instead, he decided to bleed half the air out of his space suit, a very dangerous move that could have seen him suffocate because of a lack of oxygen. 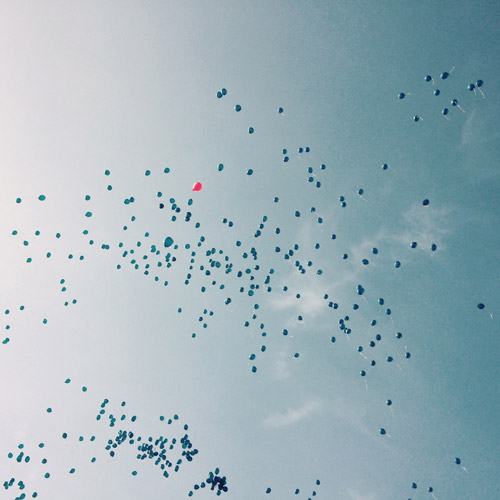 The museum released a total of 735 balloons, one for each spacewalk.

“It was time to get back into the air lock, I was floating in space, holding a camera with one hand and a cord with another one trying to pull myself back,” said Leonov.

He then had to break another rule. Instead of re-entering the air lock feet first, he entered head first because of the deformities in his space suit. It was still a struggle to get in and the last few minutes of his 12 minutes, nine seconds spacewalk demanded so much physical and emotional energy that Leonov lost 6 kilograms.

More trouble awaited Leonov once he was on board the spacecraft.

“We were trained to handle over 3,000 emergency situations but during the flight we kept facing more and more problems that were impossible to predict on Earth, because nobody had been in outer space before,” said Leonov.

Belyayev reported to control center that the automatic guidance system for re-entry had failed and requested permission to manually guide the spacecraft back to Earth. Chief space designer Sergei Korolyov had only 30 seconds to respond.

“Speaking about the emotions that the cosmonauts were experiencing at that moment, let’s try to imagine what kind of state my father was in, considering the fact that he was responsible for the flight and for sending those cosmonauts to space,” said Natalia Korolyova, daughter of Sergei Korolyov.

Korolyov made the decision and a spacecraft was manually guided back to Earth for the first time in history.

The Voskhod-2 team landed 1,500 kilometers west from the spot where they were supposed to land in the middle of a forest in the Ural Mountains. It took three days before rescuers managed to reach them. Neither the Soviet public nor the rest of the world knew of the challenges that the two had faced. Officials said that the pair had gone on holiday after they landed even while looking for them.

When back on Earth, Leonov was called in to speak with top officials and explain his insubordination in not informing the control center of the problems with the space suit during the spacewalk.

Leonov was expecting to be disciplined. He said that if he had told them of the problem, they would have called a meeting to discuss the problem, assigned experts to come up with a solution, and by then he would have been dead. Korolyov said, “You’re right,” everyone clapped and Leonov escaped punishment.

50 years on, “spacewalks are now a routine activity for most of the astronauts,” said former Soviet cosmonaut Anatoly Solovyov, who has completed more spacewalks than anyone —16 — with over 82 hours spent in outer space.

But there will always be those 12 minutes and nine seconds, when a man went into open space for the first time.