Two men walk into a room, put on space costumes and then dance like crazy, mixing hip-hop moves and air guitaring as the story of Yury Gagarin, the first man in space, is told in a funk-driven song created by the group Public Service Broadcasting.

The song "Gagarin" is on the group's new album "The Race for Space," which as usual mixes real speech and driving beats. "Gagarin" starts with the words "Govorit Moskva," or "Moscow is Speaking," the start of Soviet news reports, before switching to English. 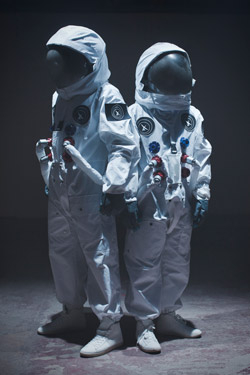 "Rather than paying tribute with some classic period piece, we thought, 'let's just make a really happy piece of music,'" group founder J. Willgoose, Esq. said in a phone interview before a gig in east London. "The track is playful, but it really is a warm-hearted tribute to him and his achievements."

The exuberant video was a way of marking that achievement and the goodwill it created.

"In life there aren't many shortcuts to happiness, but dancing is one of them," he said. "We thought it would be a good way to capture some of the joy and exuberance that he [Gagarin] seemed to spread everywhere after his mission."

PSB creates their songs using archive footage, film samples — which are then fused with live drums — guitar, banjo and electronic music. They specialize in using what they call propaganda material, such as news stories from the time of the Soviet or American space race.

Willgoose started by creating songs using samples from video games and B-movies before moving on to grander subject matter like World War II, and now the space race. "We wanted to play with sounds — I was keen to work with a choir, keen to work with bigger instrumentation. Something as big as the space race lends itself very well to that," he said.

Most of the records on the album are made using samples from American public domain sources, NASA and the archives of the British Film Institute. The album opens with U.S. President John F. Kennedy's speech from 1962 wherein he uttered the immortal words, "We choose to go to the moon."

The song "Gagarin" uses the films "Void to the Stars," "10 Years to Space" and "Man Returns from Space" from the BFI archives.

Finding Russian samples for the album was a concern initially for the group, but, luckily, the BFI had recently inherited a collection of Soviet educational songs. The guess was that they were used in schools in the 1960s and 1970s. These songs cover the space race — even Laika, the Soviet space dog who was the first animal to orbit the earth.

PSB thought of doing a story about Laika but wanted to focus on the human aspect. "That is quite a sad story," said Willgoose, "but she has been oddly well represented in Western pop music. There is a band called Laika and there have been numerous songs about it."

The album has been a critical success since it was released last month.

"'The Race for Space" is one to listen to front to back, ideally sat near a computer so that you can frantically Google all the historical events that inspired it," wrote GQ magazine. "It's an unexpectedly magnificent record, at once totally contemporary, and yet in thrall to the events of the past."

The song "Gagarin" has had many compliments on YouTube from Russians, and plenty of critics too who complain of the nerve of the English in touching such a great Soviet hero. "You've ruined everything. I'm offended on Gagarin's behalf." Another simply wrote, "Need to sink your crappy island."

The song "E.V.A." is about Soviet cosmonaut Alexei Leonov, who became the first person to space walk in 1965. The words "He is walking in space" ring out over the layers of drums and synths. The song also repeats the line "10 minutes in space, 10 minutes that shook the world." 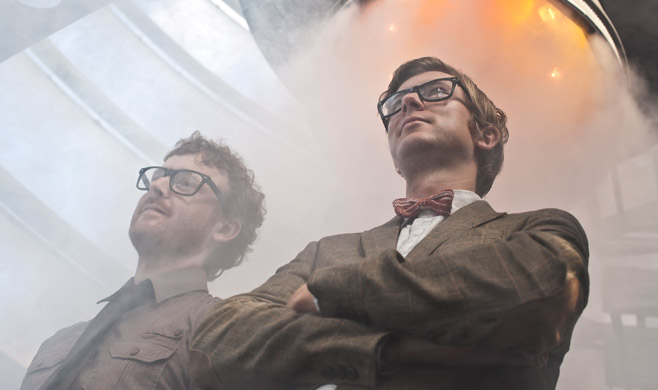 "Gagarin," from "The Race for Space," features speech and funky beats.

"Anyone who knows the mission will know that he spent far longer up there and nearly died when his suit expanded to the point where he couldn't get back into his vehicle. He ended up in Siberia after an emergency landing," Willgoose said. "We want to present material without comment and get people to do a little research."

Another track on the album is dedicated to Valentina Tereshkova, the first woman in space. Willgoose was reluctant to use samplings from archives on this track, as originally Tereshkova's voice was faded down and an English male voice was used. Not wanting to have a man talking over a woman's achievements, he invited Katherine Blamire and Jessica Davies from British folk group "The Smoke Fairies," to sing on the track.

In the album's sleeve notes, referenced on music blog "Quiffed Owl," Willgoose talked of the intentional juxtaposition of the U.S.S.R. and the U.S. in the album: "Whether it be through subtle details like recording each nation's songs with different drum kits and panning them in opposite ways or more obviously in setting the tell-tale NASA beeps against Sputnik's signal."

Does PSB take sides? Willgoose says they don't, but feels that Russian achievements seem to have been almost ignored: "The Russians won pretty much every major goal in the space race apart from getting to the moon, which arguably was the least important one. I have an immense respect and reverence for everyone involved in the space program," he said.