Russia jettisoned $22 billion worth of U.S. treasury bonds in December as the Kremlin scrambled for cash to battle a plunging ruble and fund a crisis spending program amid an emerging recession.

The sale means that Russia currently holds just $86 billion of U.S. government debt, the lowest level since 2008, according to figures released late Wednesday by the U.S. Treasury Department.

Moscow sold a total of $45 billion of U.S. treasury bonds in 2014 as relations with Western governments reached a post-Soviet nadir over the Ukraine crisis. Russian officials have said that they will wind down holdings of U.S. securities and reinvest the money in emerging market economies.

"The Central Bank needed cash," said Vladimir Tikhomirov, chief economist BCS Financial Group in Moscow. "Treasuries are one of the most liquid holdings you can have."

December was the peak of Russia's currency crisis as a falling oil price and Western sanctions drove the ruble sharply lower and endangered the country's already shaky financial stability.

The Central Bank said in October that it would make about $50 billion available through 2016 to banks via short-term loans in an effort to ease foreign exchange shortages.

About $30 billion of this has already been lent, according to Tikhomirov, with the money possibly coming from the sale of the easily accessed U.S. treasury bonds.

Russian government has also been hunting for cash as it looks to inject financing into the economy to ease the damage done by an emerging recession, which some experts estimate could see a contraction of 4 percent of gross domestic product in 2015.

"Money was invested in projects in the real sector and in support of the banking sector," said Oleg Buklemishev, director of Moscow State University's Political Economy Research Center.

Russia's foreign currency reserves — including the contents of two rainy day oil funds — fell by $124 billion last year as the Central Bank struggled to prop up the ruble.

Moscow had $368.3 billion of international reserves on Feb. 13, the latest date for which figures are available, according to Central Bank data. That is the lowest level since April 2007.

"If there is a general decline in reserves then the quantity of U.S. treasuries should also decline," according to Buklemishev, a former adviser to the Finance Minister. 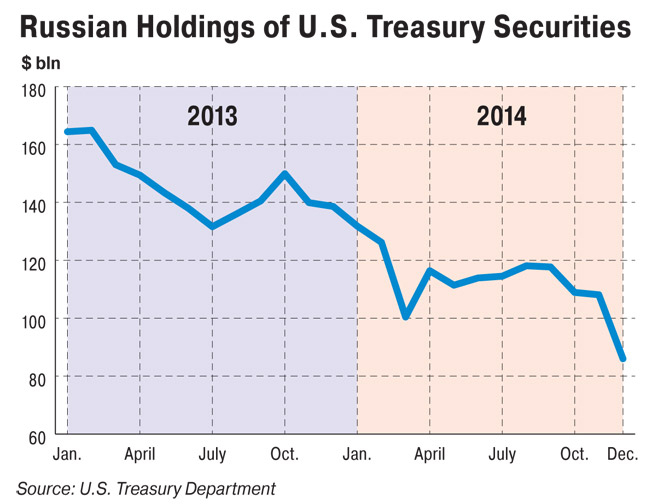 Amid deteriorating relations with the West over the crisis in Ukraine, the Kremlin has apparently been striving to rethink the way it invests its cash surplus.

"We would like to get away from investing in bonds of the countries that have introduced sanctions against us. The reassignment will happen gradually," Russian Finance Minister Anton Siluanov said at an investment forum in Sochi in September.

He added that the ministry will consider buying bonds issued by issued by Brazil, India, China and South Africa, which, along with Russia, are known collectively as the BRICS countries.

The shift appears to be part of a Russian strategy to deal with financial isolation. Moscow will take part in a BRICS development bank, based in Shanghai, that is due to be launched by the end of 2015.

The Kremlin is apparently nervous that its investments in countries like the United States could be vulnerable to further rounds of punitive sanctions if international relations disintegrate further.

Russia reduced its holding of U.S. securities in March by $25.8 billion — the biggest monthly figure of 2014 — in the wake of the annexation of the southern Ukrainian region of Crimea and the subsequent wave of Western sanctions.

"It's an exit from assets that could be seized," said Alexei Korolenko, a fund manager at UralSib bank in Moscow, about the sharp reduction in U.S. treasury holdings over 2014.

Russia has also ramped up its gold buying amid a standoff with the West. The precious metal is seen as an alternative to buying financial instruments that benefit countries Moscow sees as its geopolitical foes — such as the United States.

The Central Bank reportedly purchased over 160 tons of the precious metal in 2014, giving it the fifth largest gold holdings in the world.

Kremlin officials have threatened that Russia — once among the top ten sovereign holders of U.S. bonds — could dramatically dump all its investments as tool of economic warfare.

"If the U.S. dares to impose sanctions and seize the accounts and business of [Russian] citizens then we will no longer be able to look at America as a reliable partner and will recommend that everyone drop American treasury bonds," hawkish Kremlin economic adviser Sergei Glazyev said in March last year, shortly before the first of three waves of U.S. sanctions against Russia.

But Russia's holdings of U.S. bonds are relatively small and a fraction of what other sovereigns own, giving them relatively little leverage.

Formerly among the top ten holders of U.S. treasury bonds, cutbacks in recent years have seen Russia drop to 14th place. Ireland and Luxembourg are both bigger investors and China, the largest holder of the U.S. bonds, owns $1.2 trillion — 14 times what Moscow controls.

In total, Russia holds 1.4 percent of all U.S. government debt, according to official U.S. figures.