The leaders of France, Germany, Russia and Ukraine plan to hold a summit on the Ukraine crisis in the Belarussian capital of Minsk on Wednesday. Here is an outline of the sides' positions before the meeting.

The four sides say any agreement must be based on an agreement reached in Minsk by the Ukrainian government and the pro-Russian separatists they are fighting on Sept. 5 last year. The main points of the 12-point Minsk Protocol, which has failed to go into full force, are:

— Release of all hostages and illegally detained persons

— A follow-up memorandum signed on Sept. 19 said that both sides should also pull back heavy artillery by 15 kilometers from a frontline defined in the memorandum 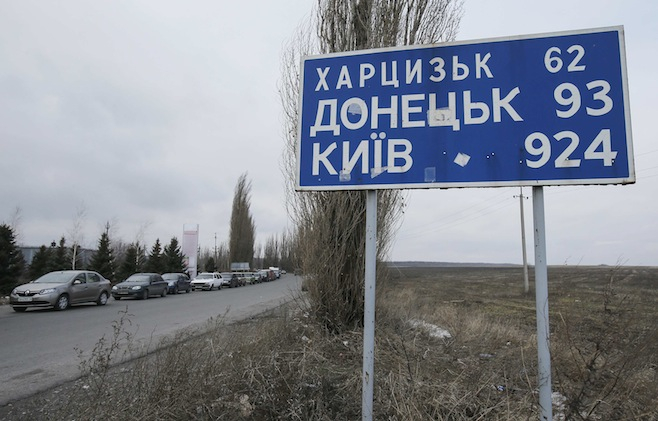 Cars queue to reach a border crossing point, before driving into Russian territory, outside the village of Uspenka, Donetsk region.

— It opposes introduction of a peacekeeping contingent

Russia, which blames the conflict on Kiev and the West, set out its position in a letter from President Vladimir Putin to President Petro Poroshenko this month. The contents have not been made public but Russian officials say:

— Kiev must engage in direct dialogue with the rebel regions

— Russia rules out handing back Crimea to Ukraine after annexing it last March, citing a referendum which supported such a move

— Putin also sent a letter to Poroshenko in January which emphasized the need for heavy artillery to be withdrawn from "the actual line of contact", an apparent departure from the Minsk agreements because of rebel territorial gains since September. However, on Jan. 21 the Russian, Ukrainian, German and French foreign ministers agreed in Berlin that the withdrawal should be based on the line agreed in Minsk

— Russian officials have made clear they want Ukraine to remain neutral and oppose it joining NATO, but have not presented this as a formal condition for a diplomatic solution

— Russian and foreign media have speculated on Putin's long-term goals for Ukraine. Some say Putin wants a "frozen" or unsolved conflict in the east that allows Russia to retain influence in Ukraine, while others say that his goal is continuing instability to weaken Ukraine's pro-western leaders 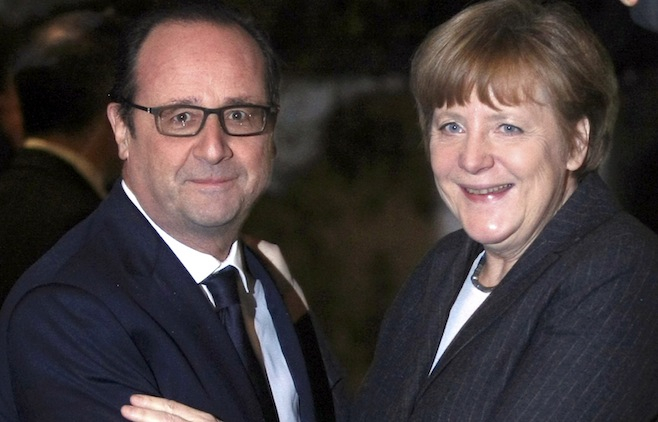 France and Germany say they are representing Europe and, as such, are united behind one position

— Germany and France hold out the threat of more sanctions if there is no peace deal, though the European Union is putting off the next stage of sanctions to give peace a chance.

— France and Germany oppose any supply of lethal weapons to Ukraine, as being discussed by the United States

— Paris and Germany, with their EU colleagues, say Russia has sent arms and troops to east Ukraine to back the separatists and that Moscow must pull these arms and forces out. Moscow denies the accusations

— In the event of a deal, Paris does not have any problem in principle with the idea of sending in OSCE observers to monitor demilitarized zones and the withdrawal of heavy arms.

— French officials have not talked in public about whether any future accord should recognize gains made since the first Minsk accord by pro-Russian rebels. The non-negotiable principle is that Ukraine's territorial integrity must be respected even if more decentralization is possible in the east of the country.

Russian Assets Fall Back Ahead of Crisis Talks on Ukraine

Russian assets fell back on Tuesday, erasing gains made earlier in the day, as oil prices ticked lower and as market participants were cautious ahead of...
news

Russia Would See U.S. Moves to Arm Ukraine as Declaration of War

U.S. provision of military aid to Ukraine would be seen by Moscow as a declaration of war and spark a global escalation of Ukraine's separatist...
news

Separatist leader Alexander Zakharchenko will not be present at a summit on east Ukraine this week but his actions will help determine the success or...
final protest