Visitors to the "Last Generation" exhibit are greeted by the sight of two beaming young girls, immortalized in black and white, frolicking in the summer sun beneath a canopy of trees, carefree and unaware that World War II is just few years away.

The man responsible for capturing this image, and others on display at the Brothers Lumiere Center of Photography, was Emmanuil Yevzerikhin, a classic of Soviet photography.

The exhibit consists of dozens of photos of happy children but a sense of melancholy and fragility hangs over the work, said curator Anastasia Lepikhova. "The children are smiling because they believe in a bright future and in building plans for adulthood," she said, but we know that they never got the chance to fulfill their dreams because of the war. "Their fate was broken."

"Of course, Yevzerikhin could not know what would happen in just a few years. But he intuitively caught and was able to show the instability and vulnerability of childhood," wrote news site Gazeta.ru of the exhibit.

Born in 1911 in Rostov-on-Don, Yevzerikhin discovered his love of photography when he was just 7 years old and, by the age of 19, was already working professionally. He joined the TASS news agency in the early 1930s, taking famous photos of writer Maxim Gorky, Soviet congresses and Arctic expeditions among others. When the war came he worked on the front, most notably at the Battle of Stalingrad. His photos were widely published and he was awarded Soviet medals for his work. 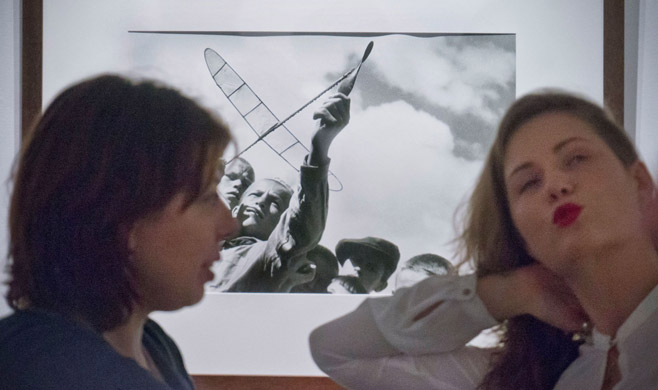 Pre-war photos of children are on show at the Brothers Lumiere Center.

Yevzerikhin was part of the Soviet photography elite when they were supposed to move from being amateur snappers "to being a focused, well-trained professional," the exhibit wrote, but his photos, using unusual angles and other experimental elements, show avant-garde influences too. His work is noticeably free of staged photos and is skilled at capturing natural moments from day-to-day life.

He once said that he always tried to look at what was around him and to pick out the most characteristic features of modern life.

Yevzerikhin created a number of photo series dedicated to children in the 1930s, from pioneer camps to a Dynamo sports school. The exhibit picks the best of these photos.

The "Forest School" series shows the life of children at a Soviet summer camp: sunbathing in neat rows, watching in awe as another child somersaults skillfully, or flocking around a boy who is about to launch an elastic band propelled toy airplane.

Yevzerikhin was commissioned by the state to compile this particular series — they were keen for the public to understand the feeling of harmony fostered at such summer camps — but the photos, in common with the rest of the collection, capture a genuine sense of spontaneity and intrigue.

The exhibit was supposed to be shown a few years ago but was delayed after Yevzerikhin's son, the owner of the collection, died. That delay meant the show opened during the 70th anniversary of the end of World War II and with fighting continuing in neighboring Ukraine, "the collection could be seen as a warning," said Lepikhova, "and a reminder of the importance of peace and working together."