NEW YORK — A jar with a handwritten note presiding over a selection of smoked salmon, beef tongue and caviar on a store counter is a testament to the store clerks' belief that linguistic expression has certain limits.

"Small tips are better than a big thank you," the note reads.

Except for the English word "tips" in capital letters, everything else is in Russian, though the monetary expressions of customer gratitude that find their way into the jar come in standard U.S. denominations.

New York City has several areas populated predominantly by Russian speakers, and while Brighton Beach in Brooklyn might have gained the most renown — or the most notoriety, depending on who is asked — others carry their own distinct vibe and claims to fame.

The store — named Gastronom, the Russian for "grocery store" — is located in the Forest Hills neighborhood of Queens, a borough in New York. It's an area that the Russian writer Sergei Dovlatov called home after immigrating to the U.S. in 1978, and some of the store's older clientele and staff still boast of having once rubbed shoulders with the writer.

"Dovlatov? He lived right here, I knew him — I've been here 30 years," a store clerk says, but the account gets patchy from there: Any encounter must have taken place at least 24 years ago, before Dovlatov's death in 1990.

New York City named a street in Dovlatov's honor this year, making him the first Russian writer to be recognized in this manner. A sign on the corner of 63rd Drive and 108th Street in Forest Hills reads: "Sergei Dovlatov Way."

The intersection is a stone's throw away from the writer's former home and smack in the center of the neighborhood's main shopping area. "One Hundred and Eighth Street" is also the name of the opening chapter in the Russian text of Dovlatov's short novel A Foreign Woman, which describes the life of the Russian immigrant community in Forest Hills.

In the busiest of local stores, the banter across the counters can get dizzying, as it shifts from past literary acquaintances, to the quality of herring, to sales clerks' views on being photographed.

"Miss, please don't take my picture — This herring is $2.99 each, sir — Why not, the picture will be like an advertisement — The herring? Yes, it's delicious, lightly salted — And then if my wife sees the picture, I'll be in trouble — C'mon, the young lady just wants a photo of a guy with a mustache — Would you like to try the pickled cabbage? Certainly, you are welcome."

The repartee that amused Dovlatov still seems to color the neighborhood's conversation, but some of the local landmarks he knew are now gone: A deli called "Monya & Misha" on 108th Street now has a "For Rent" sign in English — and, somewhat unexpectedly, in Chinese too — pasted across its awning.

"There's a store where they really knew him well — but now it's closed," said Boris Belenky, the owner of a bookstore across the street that carries exclusively Russian-language titles.

In a twist of immigrant fate Dovlatov might have appreciated, Belenky is an engineer by trade, he said, but now sits on the board of directors of the Museum of Russian Art in New Jersey, runs the bookstore, and helped organize a signature drive in the neighborhood to enshrine Dovlatov's name on the street sign.

"That's life," he said, although as immigrant ones go, it did not sound like a bad one. The scarcity of customers in his store that afternoon and dearth of entries in the notebook where the store records its daily sales, however, did not bode well for business.

Dovlatov's widow is among the bookstore's regular customers. She still lives  in Forest Hills and had stopped by just a day earlier to pick up a detective novel to read on the subway, a store assistant said, consulting an entry in her registry book on the counter. 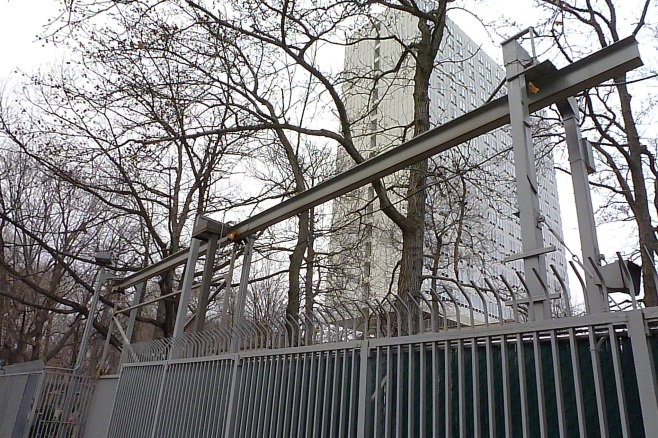 Some 20 miles away from Forest Hills, tucked away in the northernmost corner of New York City, lies a posh area called Riverdale, a section of the Bronx where the borough's famed grit gives way to magnolia-lined streets and stone mansions overlooking the Hudson River.

At a turn in the road, this upscale splendor is disrupted by a concrete block high-rise surrounded by a spiked metal fence topped with patches of barbed wire, which comes into view with all the subtlety of an armored cruiser in a yacht harbor.

The building, which together with its yard and giant satellite dishes occupies a good part of a city block, offers few clues as to its identity, but is known among some local residents as the "Russian House."

It is the residence of the employees of the Russian Consulate in Manhattan, with an attached school for their children.

Decades after the Soviet government picked the posh district to house its diplomats, the mission's lavish lifestyles made headlines last December, when U.S. federal prosecutors accused dozens of current and former diplomats of having lied about their incomes so as to to defraud their host country into paying their medical bills through Medicaid, a health insurance program for America's poor.

A man passing by on a recent day — a Russian native who had immigrated two decades ago and now lives in another part of Riverdale — said the building had been a popular shopping destination among Russian citizens in the 1990s, when many came to buy tax-free cigarettes.

"You simply showed your passport and they let you in. But I don't know what's happening there now," he said, asking not to be identified by name.

Among New York's Russian-speaking neighborhoods, the ones in the Bronx are perhaps the least known to outsiders.

During the Soviet era and for several years afterward, scores of Russian immigrants to the U.S. settled in Brooklyn's Brighton Beach, a traditional destination for Russian refugees where English is still sometimes viewed as a foreign language — good for a well-rounded education, but not really necessary to get by.

But other newcomers in that same wave of immigration headed for the Bronx, where a spattering of good schools in the north combined with relatively cheap rents and a degree of security attracted skilled Russian professionals wishing to assimilate as American citizens.

Russian speech is still frequently heard on the streets of the north Bronx, including parts of Riverdale and another neighborhood, Pelham Parkway.

There, two Russian grocery stores vye for customers on the same street, Lydig Avenue, with just 100 yards between them. One carries that apparently ubiquitous name, Gastronom, while the other adventurously identifies itself as "Premier Food," with a subheading in Cyrillic: "Russian Store." 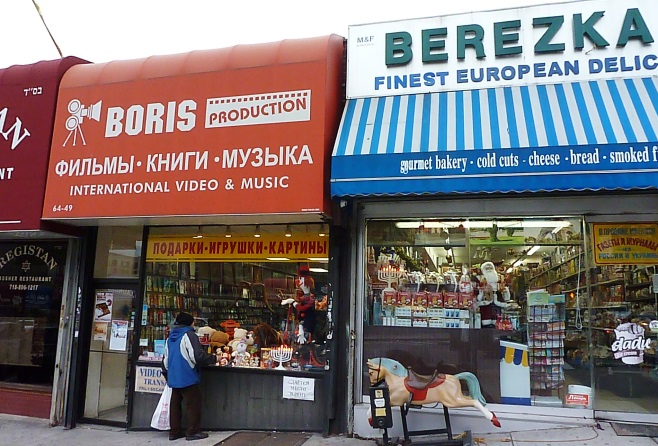 Finding popular Russian New Year's Eve fare at a Russian grocery store in New York seemed, on the face of it, just a matter of picking any item from a store shelf: Just about every delicacy displayed was a welcome addition to the traditional Russian holiday table.

But the most popular item among Russian customers around this time of the year might come as a surprise: chocolates, according to a half-dozen store clerks around the city.

The Gastronom in Forest Hills carried dozens of varieties of chocolate in brightly colored wrappers in a single aisle, in addition to chocolate "gift boxes" displayed around the shop.

New Year is a big holiday for Russian natives wherever they live, but Forest Hills is a traditionally Jewish neighborhood, so by mid-December, no Russian "New Year trees" — in practice identical to Christmas trees — were in sight. Instead, the neighborhood displayed a large menorah built out of holiday light garlands on a central street in celebration of the eight-day festival of Hanukkah that began on the evening of Dec. 16 this year.

On 108th Street, another enterprise calling itself, in Russian, a "post office," offered shipments to countries of the former Soviet Union. The post office was having a "busy season" in the run-up to New Year's Eve, according to a young clerk named Ksenia.

Ksenia, who spoke fluent and idiomatic Russian with that hint of an accent common among U.S.-raised children of Russian immigrants, said she was born in Yalta — a Black Sea port in Crimea, the peninsula that Moscow annexed from Ukraine this year — but preferred not to dwell on the latest developments in her native land.

But the painful thought was interrupted by a customer coming in to ship a parcel, and Ksenia returned to tending the cheerful connection that every year binds Russian speakers to their former homelands – the exchange of New Year’s presents.