The "Chocolate King" is finding it difficult to relinquish his throne.

Petro Poroshenko, one of Ukraine's richest men and owner of a sweets empire, made an unusual promise last spring while campaigning to be president — if elected, he would sell most of his business assets.

"As President of Ukraine, I only want to concern myself with the good of the country and that is what I will do," he told an interviewer.

Poroshenko won the election, but he hasn't succeeded yet at keeping his campaign promise.

With his country at war with Russian-backed separatists in the east, the economy faltering and its currency weakening, Ukraine's 49-year-old president hasn't sold any of his assets, including his most valuable one: a majority stake in Roshen Confectionery Corp, Ukraine's biggest sweets maker. His promise appears to be a victim of the very problems that face him as president.

Executives at the two financial firms that Poroshenko has hired to help sell his assets caution that deals, particularly in former Soviet republics and eastern Europe, can often take a year or more. But they also concede that their client's timing is terrible.

"It's clearly not a good time to sell," said Giovanni Salvetti, managing director of Rothschild CIS, which is trying to sell Roshen. "I hope the situation will improve in the first or second quarter" of 2015.

Makar Pasenyuk, a managing director at ICU in Kiev, which acts as Poroshenko's financial adviser, said there is an agreement to sell one of his other assets. He declined to identify it but said the deal has not closed and it's not clear when or if it will. Besides Roshen, Poroshenko's portfolio includes numerous other assets, including real estate and investments in a bank, an insurance company and a shipyard in Crimea. He also owns a Ukrainian television station that he has said he will keep.

In October, Novoye Vremya, a Ukrainian magazine, estimated that Poroshenko was worth $816 million and ranked him 9th among the top 100 richest Ukrainians. In a disclosure statement he filed with the government, Poroshenko reported that in 2013 his income totaled about $6.3 million, largely from the sale of securities, dividends and interest. He reported a salary of just $29,200.

Pasenyuk said Ukraine's president does not keep close tabs on the sale of his assets. "He has much better and more important things" to do than to ask about it, Pasenyuk said.

He speculated that Poroshenko made his campaign promise "because he didn't want to be perceived as yet another oligarch." He added, "I believe his asset base is not in any way dependent on politics and can hardly be influenced by his position."

Some of Poroshenko's predecessors have been accused of using the office of president to enrich themselves. Ukrainian prosecutors allege that Viktor Yanukovich, who fled to Russia in February, left the country with billions of dollars. He has denied any wrongdoing.

Several investment bankers who specialize in the consumer market expressed scepticism in recent interviews that any company would invest in a Ukrainian company like Roshen, given the country's current political climate. Many weren't even monitoring the potential sale of Roshen, with one saying he was "not sure it is actually real."

Salvetti and Paseniuk countered that Poroshenko is serious about selling. There have been some "preliminary discussions" about Roshen, Salvetti said. "Clearly the market conditions suggest to buyers some cautiousness. We have had some discussions with potentially serious people. We will have to see how the market will evolve." He declined to elaborate. 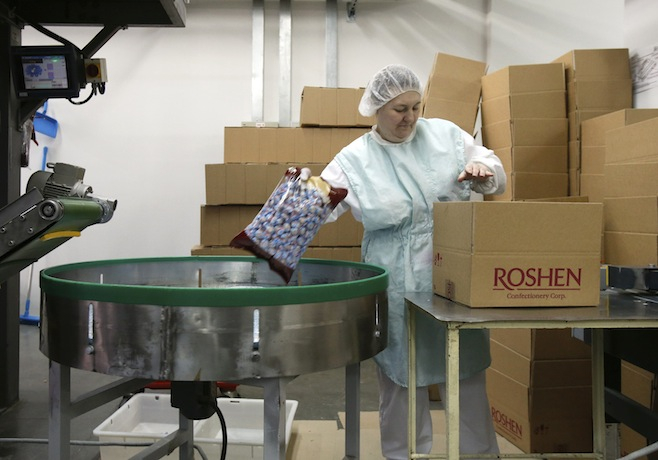 An employee works at a Roshen Confectionery Corporation plant.

Roshen, which operates six factories in four different countries as well as a chain of upscale retail shops, derives its name from the two middle syllables of Poroshenko's surname. Despite the president's nickname — the Chocolate King — Roshen also manufactures cakes, hard candies, toffee, biscuits and numerous other non-chocolate treats.

At its headquarters in Kiev, Roshen president Vyacheslav Moskalevsky said, "It would be strange if I said it was a favorable time to sell." He owns 9 percent of Roshen, but, in contrast to Poroshenko, said he has no plans to sell his stake.

He said although the company is still profitable, sales in the first 10 months of this year totaled $640 million, down 35 percent from last year. He said the company has lost a total of about $4 million a month in sales in eastern Ukraine due to the war and in Crimea, which Russia annexed in March. Its costs for raw materials have skyrocketed in part due to Ukraine's plunging currency.

Roshen has also had numerous problems in Russia, which normally accounts for about a third of its business and where it has a factory. Last year, Russia's consumer watchdog banned imports of Roshen sweets from Ukraine, citing health concerns. The company also has been entangled in a series of lengthy court battles and its factory has been raided by armed police.

In one ongoing criminal case, Russia froze $40 million of the company's funds and only allows the money to be used to pay taxes, Moskalevsky said.

The Kremlin has denied that politics has played any role in Roshen's troubles in Russia.

One unanswered question about the president's campaign promise is what happens if he believes the bids for Roshen are too low. Will he still keep his promise?

"I wouldn't advise him to sell at a low price," Salvetti said.