Historian Sheila Fitzpatrick first arrived in Russia as an Oxford student at the end of the 1960s. Before she and other students went, they had a meeting.

"We were all summoned to the [British] Foreign Office to have a briefing. … We were taken down into a basement, with rather clearly soundproofed walls," said Fitzpatrick in a talk at the Higher School of Economics in Moscow last week.

"In particular they said we would be spied on all the time; it would be impossible to make any friends because anybody who approached us would be spies," she said.

Fitzpatrick, an acclaimed historian, writes of her time in "A Spy in the Archives: A Memoir of Cold War Russia," which has received much praise.

"Fitzpatrick's absorbing memoir is set in this John le Carre era of accusation and counteraccusation — what we now know to be the last convulsions of the cold war," fellow historian Catriona Kelly wrote in a review in British newspaper The Guardian earlier this year.

The Foreign Office's cautions turned out not to be groundless. Living in the Moscow State University dorms, one of her friends, Galina, tried to compromise her. Another spied on her, but Fitzpatrick gladly helped her.

"Some of my colleagues from that time have made lifelong friends with their 'sosedki,'" Fitzpatrick said, using the Russian word for "neighbors" as a euphemism for "potential spy."

"I ended up very angry with her [Galina]," Fitzpatrick recalled. "The KGB used to organize 'provocations' against foreigners — basically to try to get you in some compromising situation, either sexual or involving illegal commercial transactions."

Galina had set her up, sending her off to somebody's apartment, and, shaken by the experience, Fitzpatrick returned to campus, where Galina was waiting for her.

"In '69-'70, I had another 'sosedka' and I really liked her. … She didn't make any pretext that she had to make reports on me," Fitzpatrick said.

By then Fitzpatrick had made friends with the people behind the journal Novy Mir. It famously published Alexander Solzhenitsyn's "Cancer Ward" in 1968, although it was subsequently banned and only went into print again in 1991.

"She, in particular, was meant to be reporting on my contacts with Novy Mir," Fitzpatrick said. "I said, 'Well, fine, I'll actually take you … to some functions where these friends of mine will be.' In this way, she could write 'probably very favorable' reports, and their relationship worked very well."

Doing research proved to be difficult especially considering Fitzpatrick's own affiliations with St. Anthony's College, Oxford, renowned for its links to the intelligence services and interest in Soviet dissidents.

Fitzpatrick was dogged though and even tried to get into the Communist Party archives, turning up at the building and asking to speak to the director. 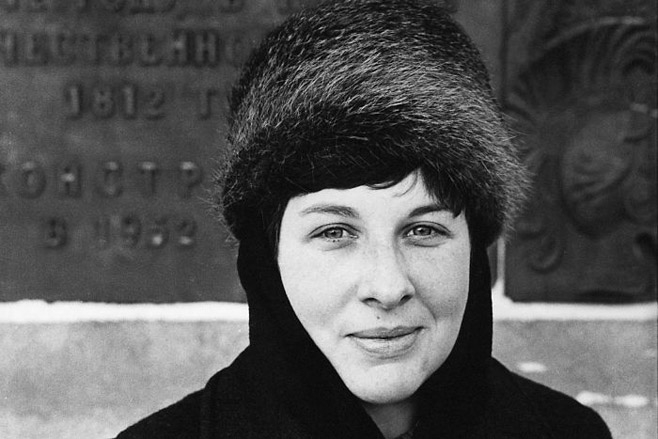 Fitzpatrick lived in Moscow from 1967 to 1970 working on a dissertation.

"I said to him, 'You should let me work,'" she said. "He sort of smiled a little bit and then said, 'Are you a member of the Communist Party?' I said no, and he said, 'Well, unfortunately, this is a Communist Party archive so we can't let you in!'"

She didn't give up though and was advised to speak to another director and present him a bottle of whiskey.

She managed to track down his deputy, near the ladies' bathroom, one of the few places she was permitted to "wander around" in the archives.

She explained, to unsympathetic ears, why she should be granted access. When he refused, she broke into tears. "I was about 26 at this point, but I probably looked younger, so there's this young woman — first of all, she's not a threat because she's a young woman — and she's behaving in this nice feminine way."

Eager to get away, she tried to excuse herself but forgot her Russian. He picked up the phone and told an underling: "Give her the archives."

Foreign historians in the Soviet Union were often trying to acquire information that they weren't supposed to have access to. "We were prepared to use all kinds of ruses and strategies to get it [information]. … We were particularly keen on getting anything on subjects that the Soviets considered to be secret," Fitzpatrick said.

Her very first published article was about Anatoly Lunacharsky, the Soviet commissar of culture and education after the Revolution. The title, she said, was "very boring." The article was not anti-Soviet, but it was picked up by Soviet authorities who assumed its author was a man and accused Fitzpatrick of being a spy.

"This is … the kind of slander on the Soviet Union that comes from the West. … This shows how Western research on the Soviet Union is in itself a kind of spying, regardless of whether these people are paid up intelligence agents," the Sovetskaya Rossiya newspaper wrote about Fitzpatrick's article.

"A Spy in the Archives: A Memoir of Cold War Russia" by Sheila Fitzpatrick is published by I.B. Tauris.

The Putin-Biden Summit: What the Suits Said

Everything at this summit told a story - even the clothes on the presidents' backs.
everyday ecology

The rare phenomenon was visible in many parts of Russia.