BRUSSELS — At a technology fair in Moscow last month, European executives faced the new reality of doing business in Russia since the West imposed sanctions: The number of companies at the international showcase had shrunk by half from a year ago.

"The impact on business couldn't be clearer. Fewer stands, fewer companies," said Mark Bultinck, a sales executive for Belgian digital screen maker Barco, which had a booth at the annual expo for the audiovisual industry.

The impact of the sanctions was already clear to Barco.

The company lost Russia's biggest shipbuilder as a client when the U.S. and the European Union blacklisted United Shipbuilding Corporation in July, meaning Barco could no longer sell screens to the company for its vessel training simulators.

Barco's experience shows how sanctions are having a broad impact not just on Russian companies but on European ones too and at a time when Europe's weak economy can ill afford it.

The European Union and the U.S. imposed economic sanctions on Russia in late July, targeting the Russian energy, banking and defense sectors to punish Moscow's support for rebels in eastern Ukraine, the West's toughest steps yet.

As EU governments consider blacklisting more Ukrainian separatists and potentially more Russians and companies over the crisis in Ukraine, anecdotal evidence and new EU data show the economic costs for Europe of pressuring the Kremlin.

In August, the month after sanctions were imposed, EU exports to Russia fell 19 percent to 7.9 billion euros ($9.91 billion) compared to July, a loss of almost 2 billion euros, according to the EU's statistics office Eurostat.

Although the data is not adjusted for seasonal swings, exports were also down 18 percent compared with August 2013 at a time of year that is traditionally busy for exporters.

The drop partly reflects the food ban Moscow imposed on the European Union in August in response to the West's sanctions. But it goes well beyond that. Total EU exports fell 12 percent in the first eight months of this year compared with a year ago.

In August, EU exports of machinery and transport equipment such as cars and tractors fell 23 percent compared with July. Compared with a year ago, those exports fell 21 percent.

Manufactured exports fell 16 percent across the 28-nation bloc in August. Germany, which accounts for one-third of sales to Russia, saw a sharp drop in sales of those goods, while Italy's manufactured exports tumbled by almost half. 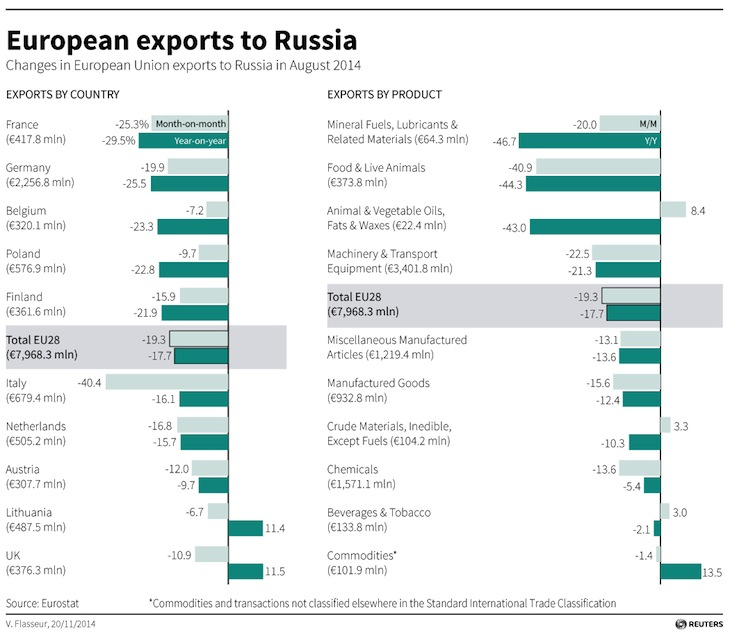 The sanctions are having such an impact because EU companies can no longer sell civilian goods that could also have a military use, no matter how small, without a license.

Tractors, cranes, excavators and mechanical parts that are needed to repair cars and trucks all fall under the so-called dual use category and need a permit.

Failure to obtain a license can bring a fine of up to 10 percent of the total value of the exported goods, officials say.

But obtaining such licenses can delay exports by two to three months because so many more products need licenses and customs are suffering a big administrative burden.

"There are delays caused by the increased flow for individual licenses," said Tristan Grimmer, a lawyer at Baker & McKenzie in London, who helps companies navigate the process.

"With the oil and gas sector, much of what is being addressed previously did not require export licenses, so you have an entirely new sector that is asking for license authorizations to supply the Russian market."

Losing Out to China?

One official at the Strategic Goods Control service for Belgium's Flanders region said the number of applications for licenses had jumped by almost 40 percent since August and officials were flooded by emails from companies seeking advice.

"Everyone wants their file to be urgent. But it is not only in our hands. Sometimes we need certification by the Belgian Embassy in Russia," said the official, who declined to be named.

In Germany, lawyer Baerbel Sachs at Noerr said that it was difficult to even get customs officials on the phone to discuss progress on a permit because so many people were calling.

Efforts are being made to hire more staff and speed up the process, governments say. Britain's Export Control Organisation says almost all licenses are issued within 60 working days.

But even in that time, companies are at risk of losing contracts to competitors from China and elsewhere, according to Frank Schauff, chief executive office at the Association of European Businesses in Russia.

"Countries that have not imposed sanctions are able to jump in where the EU has left a gap," said Schauff. "The economic position that the EU has in Russia is at risk, and it is very difficult to gain that back if it is lost."

Beijing's envoy to Berlin said in October that China would seize business opportunities in Russia.

At Belgium's Barco, the company says it can still do business in Russia, but only up to a point.

"You know that certain deals are no longer possible," said Carl Vanden Bussche, the company's director of investor relations. "It is a reality that we need to take into account."

German exports will likely grow by 4 percent in 2015 if no new global conflicts emerge, even though Western economic sanctions against Russia are likely...
news

Moscow will seek new partners in countries that have not imposed sanctions on it if Western oil and gas companies pull out of projects with Russia...
news

Russian banks are the most vulnerable among the world's large emerging market economies due to Western sanctions and near zero levels of economic...
diplomatic freeze