DILIJAN, Armenia — Some will know Dilijan as the birthplace of the Armenian truck driver in the iconic Soviet comedy "Mimino" who, in a famous scene, praises the town's "second-best water in the world." (Second only to San Francisco, the driver assures.)

Most people, however, have never heard of it.

But in the eyes of Armenian President Serzh Sargsyan, his country's future will be partly determined by the 650 teenagers who will come to inhabit the Dilijan branch of the United World College (UWC) international school alliance in the next decade.

The school was officially opened in October at a ceremony attended by more than 1,000 people, including Armenia's president, top spiritual leaders and other high-ranking guests, and has been widely hailed as part of Armenia's long-term survival strategy — to set itself apart from its neighbors.

Landlocked between Georgia, Turkey, Azerbaijan and Iran, Armenia is at a cultural crossroads, not only with its neighbors — with whom it is embroiled in constant disputes — but also with its past as a former Soviet republic.

"We are not planning to compete with anyone on the exploitation of natural resources," Sargsyan said at the school's opening ceremony, standing next to Russian banker Ruben Vardanyan, who has Armenian heritage and has headed the massive philanthropic foundation that made the school possible.

"We've chosen a different path," Sargsyan added. "We are going to consistently develop our human capital. We present to the world not oil, gas or caviar," but UWC Dilijan.

At UWC Dilijan, however, the caviar of human capital is unequivocally non-Armenian.

"If education is the priority, it is necessary to import rather than export the best minds," Vardanyan's wife and co-founder of the school, Veronika Zonabend, whose eldest son went to Yale University and young daughter is enrolled at a UWC branch in Germany, told The Moscow Times.

Out of the 96 students living on the campus at the time of the opening, only 10 percent were Armenian, 10 percent were Russian, and the remaining 80 percent were recruited from 46 other countries, spanning Swaziland to Australia.

The polyglot students, aged 16 to 18, will graduate with an international baccalaureate (IB) diploma, which is currently not recognized by Armenian universities, a fact likely to result in brain drain after graduation.

And the school's foreignness expands beyond its enrollment list.

British architectural firm Flynn and the Moscow-based RD Construction company made large efforts to make the school blend in with the surrounding mountain landscape.

But for all its living walls, green roofs and the use of regional construction materials such as tuff — a volcanic stone typically used in traditional Armenian architecture — UWC Dilijan's modern design and lavish interior make it stand out like a strawberry in a bowl of peas.

Even in its ambition to become the "greenest building in Armenia," the campus is an ostentatious symbol of Western, albeit green, chic.

Students have access to a sports field, indoor basketball court, a private amphitheater, a fully equipped gym, and a swimming pool that could rival an Olympic venue.

The cafeteria offers more than a dozen international dishes, with "no fat" options for those watching their waistlines. On the day of the opening, there wasn't a single (greasy) Armenian dolma to be found on the extensive menu. 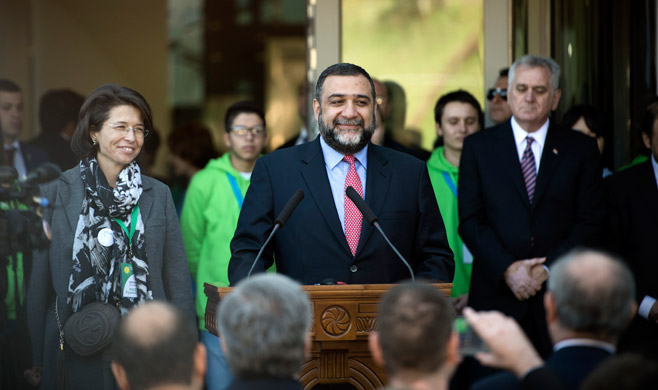 Russian philanthropist Ruben Vardanyan (center) speaking at the opening ceremony of UWC Dilijan in October.  To his left, wife and co-founder of the school Veronika Zonabend.

Undoubtedly, some would criticize the school as elitist, and question whether the planned $190 million investment — $115 million of which had been raised as of September this year — would not have been better spent on local education initiatives.

But the founders of UWC Dilijan argue that the difference with Armenian schools is more than skin-deep.

More than just modern architecture and cosmopolitan students, UWC Dilijan expounds a teaching philosophy that is new to Armenia and the entire former Soviet region.

Founded in 1962 by German educator Kurt Hahn in the aftermath of the Cold War, the UWC alliance preaches cross-cultural dialogue, community involvement and sharing — values, the school's founders argue, that are diametrically opposed to the Soviet educational philosophy.

"The Soviet system had three main principles: Don't believe, don't fear, don't ask. Whereas I think you must believe that you can change the world, believe in other people and believe in yourself; be unafraid to make mistakes and, having done so, move on; ask for help," Vardanyan told The Moscow Times.

"As products of the Soviet age and space, we all need to change," Vardanyan said.

The assumption is that such a shift will benefit everyone by offering the new generation an alternative education within reach, sometimes quite literally.

Part of the curriculum at UWC Dilijan has students engage in different local community projects. Children from Dilijan receive free English lessons and are given access to the campus' sports facilities.

Lucile, one of 8 Armenians studying at UWC Dilijan, said her only alternative would have been to go to a local school.

"And that would not have been a good experience for me," she said. "Education in Armenia is awful." She added that her ambition is to carry through the "many, many changes" that her country's education system needs.

"Most of my friends thought I was a bit weird in the beginning, but many of them will apply this year," she said.

Once accepted to any of the UWC schools, placement is guaranteed regardless of someone's socio-economic status. In Dilijan's opening year, a large majority of the students were there on a 10 to 100 percent scholarship, the school said, so theoretically it is accessible to anyone who can make the cut. 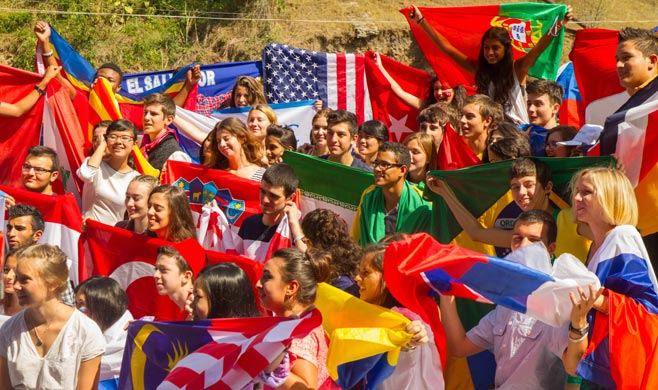 In its opening year, UWC Dilijan houses students from 48 countries.

By 2023, the number of students at Dilijan will have grown to 650, aged 13 to 18. Most of them will have applied online, and many will have never traveled to Armenia before.

In the central library the students will find two books donated to the school by its founders — a copy of Vasily Grossman's "Life and Fate," to help them understand the Russian heritage of the country they are living in, and "Don Quixote," by Spain's Miguel de Cervantes. To teach them "not to behave like the majority," Zonabend said.

A golden formula for success, the founders think.

"Not too long from now we'll lose count of the number of Nobel laureates Dilijan generated," Zonabend said.

And though it'll be at least a decade before that prediction can be tested, the philanthropist couple has arguably succeeded in expanding Dilijan's reputation from the town with the world's second-best water to the site of the best school in the former Soviet Union.

A decade ago, it was just another down-at-heels vacation destination. But the Black Sea resort town of Sochi has been transformed by hosting the 2014...
Energy-rich Waters

The dispute between Turkey and Greece over waters in the Mediterranean should be settled on the "basis of international law", Russian said Monday.
vaccine race

85% of Russian Coronavirus Vaccine Volunteers See No Side Effects – Developer

Sputnik V’s side effects include a fever of 38 degrees Celsius, headaches and muscle pain.
'people's ultimatum'

More than 170 people were reportedly detained in Minsk and other cities on Monday.