Last spring, Maxim, 14, climbed onto the roof of a moving commuter train in his hometown of Bryansk. As the train swayed he grabbed the electric wires that powered the train to stop from himself losing balance, and the resulting shock left him with burns to 80 percent of his body.

Now he is in residence at the burns unit of Moscow's Speransky Children's Hospital, one of 1,500 children treated every year in what is considered the most innovative burns clinic in Russia.

This Friday, the Speransky Children's Hospital Fund hosts a charity classical music concert to raise funds for the unit. 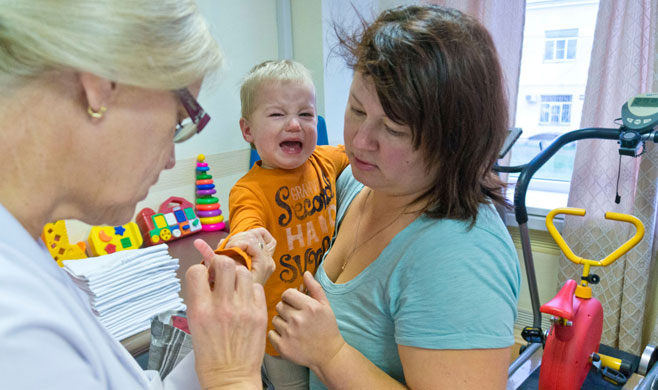 The fund has its own playrooms for children with toys, books and games.

The fund relies on donations from both Russian and foreign companies, such as VTB Bank and Ernst & Young, to purchase expensive medical equipment.

But it also needs support at a smaller level, from individual donors who support events such as Friday's concert, where tickets cost 700 or 1,000 rubles ($15-$20). 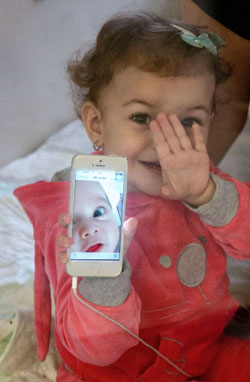 A happy patient showing a photo.

The annual concert, will this year see one of Moscow's favorite orchestral ensembles, Musica Viva, play music by Wolfgang Mozart and Pyotr Tchaikovsky.

"It's a major source of giving," Kazbekov said.

Current geopolitical tensions have affected the unit, too. "We haven't felt the sanctions yet, just the prices," said Larissa Gorshkova, a program coordinator with the fund, adding that prices for medical materials that help reduce scarring have increased. Problems with prices have meant that the fund has had to reduce the amount of equipment it buys or even cancel orders altogether, she said.

The fund employs psychologists and play specialists to help children cope with the trauma of their wounds.

"Thank you for the wonderful idea of psychological help! Treatment in a hospital, operations, even unpleasant medical procedures are always stressful for children and parents, and psychologists are what help overcome that," Anna Yevseyeva, whose daughter was treated at the clinic, wrote on the fund's website.

"Burns are 10 times more likely in Russia than in the West," Kazbekov said. Often they are connected with alcoholism, smoking and carelessness, he said. Another common problem is burns from exposed wires in buildings that have been badly or carelessly built.

The fund has its own playrooms, one for the younger children up to three years old and another for older children between three and 18. Both are fitted with modern furniture, new books, toys and games.

People who have had a small burn do not understand the impact of a serious burn, which can require lifelong rehabilitation, said Alla Pochtar, a program coordinator with the fund.

"That is why we need these expensive materials that reduce the need for more operations," she said. 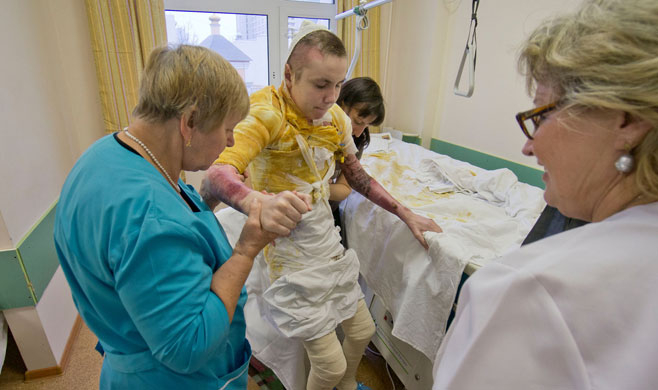 Maxim, 14, suffered 80 percent burns after riding on the roof of a train.

Many months after the accident, Maxim still has most of his body in bandages and breathes with obvious difficulty, but he is helped out of bed by a nurse and his mother and stands up.

"This is the first day he's stood up in six months," Kazbekov said. "It's a very proud moment."