The recent elections in Ukraine's self-proclaimed Donetsk and Luhansk people's republics may have been slammed by Western governments, but they were praised by a ragtag group of "international observers" including a Spaniard who may not exist, a Nashville lawyer previously suspended for fraud, a far-right Serbian denied entry into Canada for his affiliation with convicted war criminals, and an Austrian nationalist renowned among U.S. neo-Nazis.

The list of observers released by Ukraine's Interior Ministry the day after the vote — called "unfortunate and counterproductive" by the UN secretary general and described as a farce by Ukrainian President Petro Poroshenko — includes 18 names, though Russian media and foreign journalists present at the elections said the number of international observers was much higher, with estimates ranging from 50 to 70.

The organizations involved include the Eurasian Observatory of Democracy and Elections, run by Belgian neo-Nazi Luc Michel; the European Centre for Geopolitical Analysis, run by Polish far-right politician Mateusz Piskorski; and the Agency for Security and Cooperation in Europe (ASCE), which was founded the night before the vote and apparently dismantled immediately after.

That agency's founder, Ewald Stadler, a far-right Austrian politician whose 2010 speech was dubbed "the most racist speech ever" in a European parliament by neo-Nazi website Stormfront.org, admitted in Donetsk that the ASCE did not legally exist, according to British newspaper The Telegraph.

Piskorski of the European Centre for Geopolitical Analysis previously worked as an election observer at the 2007 Russian State Duma elections.

But he is perhaps better known for publishing a magazine called Odala throughout the 1990s and early 2000s that openly praised Nazi Germany and featured various interviews with Holocaust deniers.

Piskorski is also a member of the International Eurasian Movement, founded by Alexander Dugin, an ultraconservative Russian political analyst with ties to the Kremlin.

In addition to European political figures with a track record of observing unrecognized elections, the list also included some more obscure but no less colorful figures.

The company's offices have closed, the phone is disconnected and no online reviews by clients could be found about the company's services.

Abernathy is also the founder of the Law Offices of Frank G. Abernathy — whose phone has also been disconnected — and a practicing lawyer. But according to the Tennessee Bar Association, his license was only reinstated in 2011 after being suspended in 2002.

The Supreme Court of Tennessee fined and suspended Abernathy after he "used confidential information to his advantage" and "engaged in misrepresentation" to borrow a large sum of money from one of his clients.

Several phone numbers listed for Abernathy were found to be disconnected, including one for a Bermuda-based insurance company he claims to work for. A message sent to him on social media went unanswered by print time.

American-Serbian professor, writer and fellow observer Srda Trifkovic was easier to get a hold of.

Offering his impression of Sunday's election, Trifkovic said that residents in Donetsk seemed eager to vote — but he conceded that that was "quite apart from the issue of the 'legality' of the election."

He said he was invited by representatives of the Donetsk People's Republic (DNR) a month in advance, and they "made the travel, board and lodging arrangements, but there was no honorarium involved."

"Overall, the process was as democratically valid as could be expected under the extraordinary security circumstances," he said, adding that "in view of the long, cold winter on the horizon and Ukraine's ongoing financial and economic collapse," the authorities in Kiev should "heed the dictate of expediency" and talk to the new DNR leaders.

Trifkovic said he also observed the Crimean referendum in March, which was likewise universally dismissed by Western governments and influential international organizations.

Like many of the other observers, Trifkovic has an extensive resume but a spotty reputation, having authored numerous books and done stints as a correspondent for the BBC World Service and U.S. News & World Report but being better known for his ties to the Bosnian Serb government in the 1990s.

In February 2011, he was denied access to Canada for having served as an unofficial spokesman for the Republika Srpska government in the 1990s and as adviser to Republika Srpska leader Biljana Plavsic, who was later convicted of war crimes for her role in the Bosnian War.

Trifkovic is also known for having testified as part of the defense for another convicted war criminal, Milomir Stakic, in the International Criminal Tribunal for the Former Yugoslavia.

Stakic was charged with genocide and crimes against humanity in that trial. 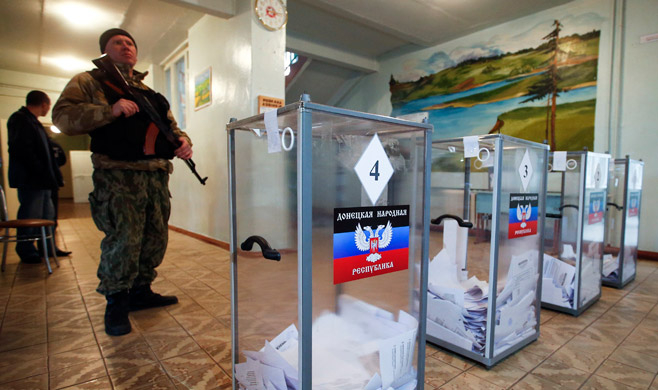 In contrast with the many observers with long, dramatic histories, there was one observer listed by the rebels themselves who could only be described as a ghost, with no record of him listed on the website of the company that purportedly sent him to monitor the elections.

Oleg Bondarenko, a spokesman for the press center of Novorossia, the rebels' self-proclaimed sovereign nation, confirmed to The Moscow Times that Delgado had attended as an observer, along with another representative of Mediasiete Corporation, Renato Landeira.

The participation of Mediasiete Corporation comes as no surprise, as the company earlier sent its president to observe the Crimean referendum in March.

A Moscow-based Spanish correspondent for Spain's Telecinco TV network said he had an equally difficult time finding any record of Delgado.

"I have been looking for information on him along with other Spanish journalists, but there is none at all," said Ricardo Marquina Montanana.

The sparse information on Delgado's background sparked speculation as to whether or not he exists and highlights the murky nature of the election monitoring, with many of the confirmed observers openly saying they did not go through Ukrainian customs to get into the country.

Instead, they traveled to Moscow first and entered Ukraine through its lengthy border with Russia, bypassing border control stations.

While the group of international observers hailed the elections as having been conducted in an atmosphere of joy and unity — citing the ubiquitous free food and folk music — Western journalists painted a different picture.

U.S. journalist Christopher Miller wrote for the Mashable news agency that the polling stations were "guarded by camouflaged gunmen … in what closely resembled an event straight out of the Soviet Union, except for the fact that votes could also be cast online."

Fabrice Beaur confirmed his attendance at the elections on behalf of Michel's Eurasian Observatory of Democracy and Elections, as well as the participation of Piskorski's ECGA.

He suggested that his group and the others represented at the elections — including the ASCE — were better than the Organization for Security and Cooperation and Europe, from which the ASCE appears to have gotten its name.

"Our participation is free," Beaur wrote in e-mailed comments to The Moscow Times. "Unlike the OSCE," he said, the groups involved in monitoring the Donetsk and Luhansk elections didn't take any "envelope," apparently a not so subtle suggestion that the OSCE takes bribes to issue its approval of elections.

Beaur insisted that the election was fair, "a real grassroots movement to say no to the junta of Kiev."

"The anti-fascist struggle is still relevant," he said, echoing claims made by the separatists in eastern Ukraine that the new authorities in Kiev were Nazis.

While repeatedly leveling accusations of fascism, it was unclear how Beaur or the authorities in Donetsk and Luhansk have been able to reconcile themselves with the far-right leanings of most of the election observers present at Sunday's vote, at least one of whom is widely reported to have openly praised Nazi Germany throughout his career.

The comments come after Germany held its first vote in 16 years where Chancellor Angela Merkel was not running for re-election.