Three-dimensional printed works are displayed next to traditional textiles and iconic furniture in "British Design: From William Morris to the Digital Revolution," a new exhibit at the Pushkin Museum of Fine Arts that has been put together in partnership with the Moscow Design Museum and Britain's Victoria and Albert Museum.

The exhibition, a dialogue between the 19th and 21st centuries, points toward what design will be like in the future, organizers said. The show centers on the key figures behind design in Britain after the Industrial Revolution of the 19th century, and those who have followed in their footsteps today.

William Morris, Christopher Dresser and Charles Rennie Mackintosh are the focus in this part of the exhibit. Morris, an artist, craftsman and one of the most significant cultural figures in Victorian Britain, looked back to traditional artisan production and hoped to use new technology to bring his designs to the masses.

"Cherishing a dream of bringing beauty to everyone's lives, he became one of the most expensive designers of his time," exhibit curator Alyona Sokolnikova said. "His works and papers are still highly valued, but the level of technology of his time prevented him from making them mass-scale and widely available." Some of his most beautiful designs, meant as "art for all," are on display. 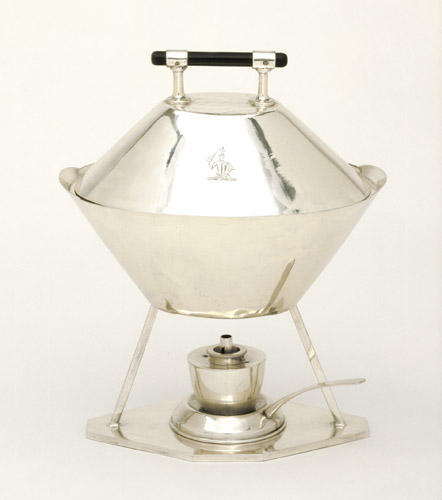 Christopher Dresser, a lesser-known figure than Morris today, represents a different look at design. Originally a botanist, Dresser believed that nature could be a source of inspiration. Combining this principle with Japanese minimalist aesthetics, he, like Scottish architect and designer Mackintosh, built the foundations of modernism with functional aesthetics that relied on plain geometric forms.

An iconic armchair by Mackintosh is on show at the Pushkin Museum. A number of his other works can be seen in a separate exhibit at the Kremlin Museum. Both exhibits are part of the U.K.-Russia year of cultural exchange.

Dresser's kitchenware, including a silver egg boiler, at the exhibit looks startlingly contemporary and his work, along with Mackintosh's and Morris' and others are a starting point for the more modern items on show.

Other contemporary works show off the use of new technology. Fashion designer Arena Page creates digital 3D designs that are "flattened" into a 2D pattern and then reproduced in fabric. Her extravagant jacket with richly decorated sleeves is exhibited next to a 3D-printed collar, a wearable sculpture, by Daniel Widrig.

Architect and designer Zaha Hadid, who was recently awarded the so-called Nobel Prize of architecture, the Pritzker Prize, is exhibiting a pair of "cosmic" shoes where the wearer's feet hover about 16 centimeters above the ground. 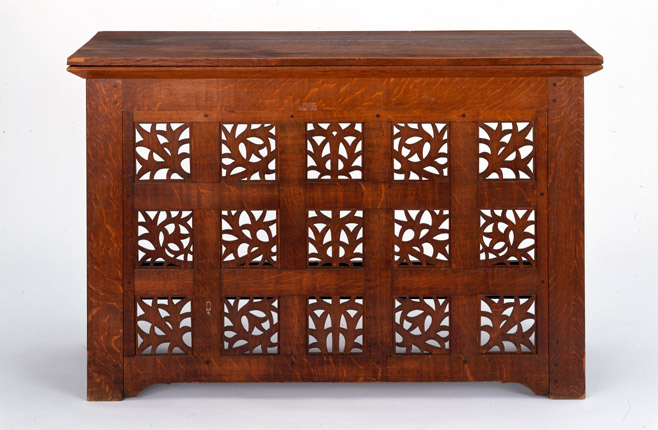 Philip Speakman Webb's altar from 1897 looks toward work of the future.

"A modern designer has in fact become a 'digital craftsman,'" curator Sokolnikova said. We are at the eve of a new revolution in technology that will overturn the world just like the Industrial Revolution in the 19th century, she said, as 3D printing and laser beam cutting technologies allow a designer to make products that not only match but surpass the craft of the past.

"Just like the designers of the past, someone with a vision of the interaction between form and function can apply this knowledge in different areas," Sokolnikova said. "And there is once again the dilution of the borders between design and science, design and arts."

The exhibit shows how the Pushkin Museum is changing under director Marina Loshak, who took over from long-running head Irina Antonova last year.

"It is a sign of our special interest in design," Loshak said at the opening of the exhibition. "Within our museum quarter, we would like to have a dedicated ground for design, with an academic floor relating to design history and an exhibition space."

One of our dreams is to establish a separate Pushkin design project outside the museum quarter," she said, adding that the Pushkin was in talks with the Victoria and Albert Museum about the project.

"British Design: From William Morris to the Digital Revolution" runs until Nov. 30 at the Pushkin Museum of Fine Arts. 12 Ulitsa Volkhonka. Metro Kropotkinskaya. 495-609-9520.