Lithuanian photographer Romualdas Požerskis, whose signature black-and-white works have influenced the Baltic school for generations, is marking 40 years of his art with an exhibition at the Lumiere Brothers gallery in Moscow.

A sharp contrast between light and shadow is a typical feature of Požerskis' documentary-style photos, which have captured decades of Lithuania's evolution from a communist Soviet republic into a modern European state.

"The black-and-white world is a little more serious, a little more tragic and psychologically deeper" than its colorized counterpart, he told The Moscow Times at the show's opening last week. "This is a world for which you need to stop a little."

Požerskis, who turned 63 last month, strives for all his photos to "have some kind of inherent, social gravity," he said.

The exhibition, which features more than 70 of his black-and-white works selected from seven collections since 1974, follows Lithuania's dramatic recent history through momentary glimpses of its people. 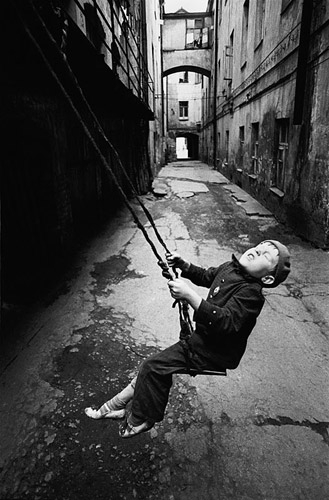 His work is characterized by a sharp contrast between light and shadow.

Beginning with "Victories and Defeats" (1974-1976) and ending with "The Miseries and Joys of Little Alfonsas" (1992-2005), the exhibition focuses in on the "classical period for which he is famous," curator Yana Iskakova told The Moscow Times.

Having already received much acclaim, the exhibition is titled "Grand Scale: Documentary Prose," a testament to the photographer's view that his individual works should tell a greater story.

Požerskis, who spends years developing a single photo series, explained that he and his contemporaries have been using their snapshots to "write novels on the topic of people" to "show Lithuania."

"We differ a little from amateurs in that an amateur takes a photograph when he sees something interesting, but we do so when we find what we are looking for — when we have an idea," said Požerskis, who was taking snapshots throughout the exhibition's opening.

A Baltic photographer "can visit one person two or three times" before finding "what you had in mind, your vision," he added. 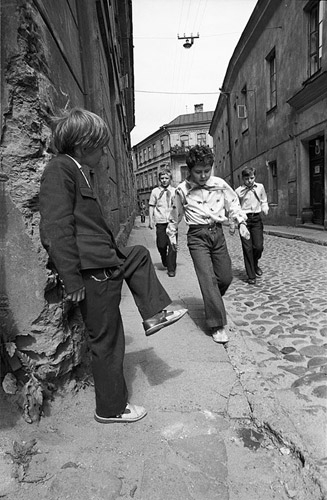 Požerskis is an "outstanding representative of Lithuanian photography," distinguished by his sensitivity, according to curator Iskakova. "He feels human emotions very subtly and is able to perceive and interpret them through his photographs."

"This photography is unique for its time and place," she continued. "Lithuania existed within the framework of the Soviet Union, yet its photographers tended to gravitate toward Western styles."

Požerskis, who had to wait until perestroika to show many of his works, said the "most frightening thing" for an artist is "self-censorship," when he knows that "he cannot show his photographs anywhere." 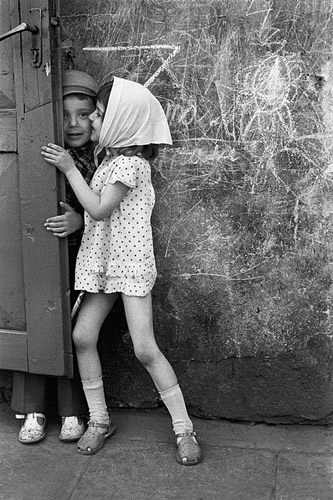 He preferred to film ordinary folks.

But he does not shy away from showing "ugliness," he continued. He prefers to photograph ordinary people, with the most important focus on "emotion," and does not seek to hide the dilapidated homes and rubbish-strewn streets that form the backdrop of everyday life.

The curator, when asked what she expected viewers' reactions to be, said "these are sad photographs," but they show a "bright sadness" that is said to live in the Lithuanian soul.

Požerskis said that perhaps his work is most significant as a personal "contribution" to Lithuania's heritage, by "documenting how it all happened" during such a period of social and political upheaval.

One viewer at the opening called the exhibition "an encounter with the past." However, Požerskis said, "All of these photographs had the future in mind."