On the orders of President Vladimir Putin, Russia on Thursday cut off over $9 billion in food imports to its market in the most aggressive response yet to Western sanctions over its backing of separatist rebels in eastern Ukraine, escalating an economic clash that has already undermined the fragile Russian economy.

The move — which is likely to slash consumer choice in supermarkets, hike Russia's already high inflation rate and force interest rates up — follows Putin's signing of a decree on Wednesday ordering the government to bar food imports from countries that have imposed sanctions, "with the purpose of ensuring Russia's safety."

The decision comes in a tit-for-tat reprisal to Western sanctions over Russia's support of separatist militias in eastern Ukraine. The West's sanctions escalated significantly following the downing of a Malaysian passenger plane in the region last month, with both the United States and European Union cutting off major state-owned banks' access to Western capital markets and barring exports of defense and oil technologies to Russia.

The food import ban will last for one year, Medvedev said, although there is room for negotiation.

"If our partners demonstrate a constructive approach on issues of cooperation, the government is prepared to reconsider the duration of these measures," he said.

Medvedev noted that the measures will not touch children's food or goods that individuals personally buy abroad and transport to Russia.

The imports directly affected by the sanctions reached $9.2 billion last year, constituting more than half of the total value of food exported to Russia from the countries concerned and nearly a quarter of Russia's food imports last year, Reuters reported, citing data from the International Trade Center.

An increase in food prices will be unavoidable, economists agreed, even if the Russia succeeds in its scramble to replace most of the banned imports with products from other countries.

Agriculture Minister Nikolai Fyodorov said in a briefing Thursday that the government would look to, among others, South America, Central Asia, China, Israel and Belarus to source products.

While possible in some cases — replacing Norwegian fish imports with South American, for instance — such replacements will come with an attendant hike in costs, according to Valery Mironov, head of the Higher School of Economics' Center for Development.

"The logistics are such, from South America in particular, that it will be noticeably more expensive than from the European Union, so an acceleration in inflation is impossible to avoid," Mironov said.

Even if the banned products continue to arrive on the Russian market through intermediate countries, such as Russia's fellow Customs Union members Belarus and Kazakhstan, they will cost more, since the delivery will no longer be direct, said Natalya Orlova, chief economist at Alfa Bank.

Price increases are bound to drive up inflation, analysts agreed. Alfa Bank on Thursday raised its inflation forecast for the year from 7 percent to 8 percent, and Mironov said inflation can be expected to increase by between 0.5 and 1 percent.

Inflation is currently hovering at about 7.5 percent, far above the Central Bank's 5 percent target for the year.

A further increase could well force the Central Bank to raise interest rates yet again in what would be the fourth hike this hear, Orlova said. The regulator unexpectedly hiked the key rate to 8 percent on the eve of the latest round of EU sanctions, up from just 5.5 percent in the beginning of the year. 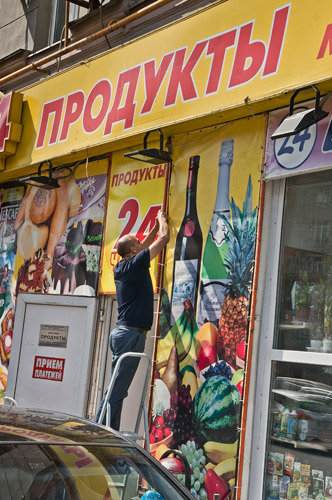 Russians will be facing reduced choice and higher prices in supermarkets.

Russian consumers will not see empty shelves reminiscent of Soviet times, analysts agreed, though Russia's dependence on imported products varies depending on the season and type of food, as well as the location and income level of the consumer.

Reliance on food imports at 40 percent in Moscow and St. Petersburg, while the average across Russia is just 15 percent, Mironov said. These numbers include imports from South America, Israel, Africa and China, which are not affected by the bans.

The consumers likely to see their spending change the most are the middle class and the wealthy, those with purchasing power and a taste for high-quality European products that are not easily substituted.

"From Europe, Russia mainly imported high-end products, such as expensive sausages … A lack of expensive European products would mean that these consumers will turn to other, lower-priced goods," Mironov said.

As for standard fare, Russia's level of dependence depends on the product in question. Vladislav Inozemtsev, a professor of economics and director of the Moscow-based Center for Post-Industrial Studies, said that in the recent years Russia's dependency on some products from abroad, like imported meat, has been decreasing.

"Poultry demand is almost 100 percent covered by local produce, as well as over 80 percent of pork supplies," he said. "But there is a strong import reliance on beef, less than 50 percent of which is produced within Russia."

"Russia does not have well developed logistics and long-term food storage facilities to preserve vegetables and fruit. … We will see that in November, when locally produced fresh vegetables will have to be substituted with imports," he said.

Even as the sanctions cracked down on their supply chains, Russian retailers on Thursday were hopeful that the banned imports could be placed with local produce and imports from other countries.

"We will be largely dependent on the local producers' ability to meet the demand for the restricted products," said Sergei Bakumov, managing director for corporate services at X5 Retail Group, one of Russia's largest food retail chains.

At the same time, he said, countries on the blacklist are not the sole producers of the banned goods, and so his company will look to source supplies from other countries.

A competitor, Metro Cash & Carry, said in a statement Thursday that the ban will not have a significant impact on its supplies.

"Since our wholesale operations are focused on domestic market, most of our products are sourced within the country. For this reason we expect a limited impact on our operational business in Russia, although certain categories can be affected," Metro said.

Russian commentators have triumphantly pointed to the erasure of foreign competition as a force that could  bolster business for domestic farmers.

Agriculture Minister Fyodorov said Thursday that Russian agriculture could increase its production by 281 billion rubles ($7.7 billion) in half a year, according to estimates by industry associations.

But while replacing imports could indeed have a positive impact for Russian farmers, the benefits will come only next year, Mironov said. Russian farmers, who harvest their crops just once a year unlike their competitors in warmer climates, will first have to plant their fields with an eye to the increased demand.

Russia's food sanctions would have to last more than a year for farmers to reap the benefit, while the rest of Russia's economy would continue to suffer from the fallout of Western sanctions.

All in all, Mironov said, the greatest risk is that the ban will lead to further escalation.

"The EU or U.S. could come up with new sanctions in response, Russia could answer, and so it would unfold," he said.