When Moscow announced that it would be cutting off gas supplies to Ukraine last month, the stoppage was compared with the two previous suspensions in 2006 and 2009. This time, observers noted, Moscow's motivations seemed far more political than economic.

Outrage from European capitals arose in the two prior instances, but the responses this time from Brussels have been less understanding. There is one other substantive difference: In 2006 and 2009, Russia was bullish, able to cow and convince external clients of its necessity. The most recent stoppage, though, has illustrated Moscow's decreasing capacities as both provider and partner, as the European Union plays hardball over the South Stream gas pipeline.

Moreover, the declining importance of Russia's presence as a gas provider can be seen not simply in the markets it once held, but in the markets it has lost, either through past oversight or the Kremlin's Crimean adventurism.

The 2014 Statistical Review of World Energy, published by British Petroleum, recently highlighted these trends. The report was compiled based on data from 2013, meaning that the fallout from the Crimean annexation, in terms of sanctions and market reassessment, was not taken into account.

According to the report, Russia's energy production expanded by 1.5 percent in 2013, and Russia held the world's largest share of combined oil and gas production, at 15 percent of global output. Likewise, according to the report, Moscow remained the world's largest exporter of natural gas, producing 22 percent of global output. In isolation, these figures make it look as if the industry is succeeding, unhindered by market shifts.

However, in a global context, Russia's troubles start coming to light. The United States saw the most rapid energy production growth of any nation and now stands as the world's largest producer of natural gas. Likewise, the EU's gas storage units, following a mild winter, are currently at record-high 65 percent capacity.

While the report doesn't reflect the post-Crimea political climate, the EU will only continue its divestment from Russia, with new emphasis on shale exploration, renewable expansion and imports from North America.

With North America and Europe turning to non-Russian sources for their energy needs, you might think that China, which the report says accounts for 22.4 percent of the world's energy consumption, would be able to help Moscow stomach the loss of Western business.

But this is where the report truly highlights the Kremlin's plight. For where Russia could have theoretically been one of the prime providers quenching Beijing's thirst for energy, a combination of Moscow's blinkered policies and China's geopolitical strength means otherwise. 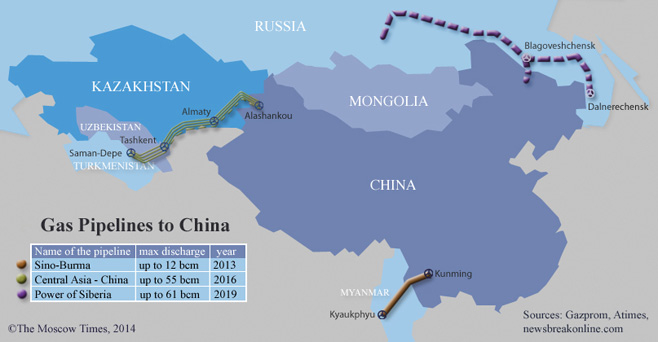 Turkmenistan currently supplies nearly 25 billion cubic meters (bcm) annually, with an additional 2.9 bcm from Uzbekistan and 0.1 bcm from Kazakhstan. The total represented 45 percent of China's gas imports last year and looks set to expand in the months ahead.

While Russia did sign a $400 million, 38 bcm deal with China recently, the amount remains well below the 65 bcm Turkmenistan has agreed to provide China by 2020, and looks to be less than the total that a pair of new pipelines coming online this year will transit from Central Asia to China.

This shift toward Central Asian gas production has been one of the less publicized aspects of China's expansion over the past decade and appears to undermine Russia's regional and economic influence.

While Russia remained focused on the European market for the past decade, China began constructing and expanding pipelines through all five Central Asian states, which had traditionally been Russian strongholds.

And where the Chinese market has proven a boon to Central Asian economies, it's also provided Central Asian nations a means of maneuvering beyond Russia's reach. Turkmenistan, which only began supplying gas to China in 2009, sums up this new reality perfectly.

Where Turkmenistan was once nearly entirely dependent on Russia for both exports and infrastructure, it has swiftly become a regional heavyweight in gas exports. Continually calling for a trans-Caspian line, potentially contributing to the Trans-Anatolian Pipeline, and pushing for a transit route through India, Turkmenistan has morphed from a Russian dependency to an important regional actor. And with plans to triple its production over the next two decades, Turkmenistan's weight stands only to grow.

To be sure, there are still potential avenues for Russia to remedy its expected drop in supply and imports. The recent decision to forgive North Korean debt paves a way to access the South Korean market. And new entreaties to Azerbaijan to join the Eurasian Economic Union could theoretically allow Russia greater access to influencing Baku's energy output.

However, supplying Korea remains a long-term project, and Azerbaijan's prospective recruitment to the EEU remains far from firm. More likely is that Baku will increase transit cooperation with Turkmenistan. Central Asia will likely play a notable role in Seoul's energy needs, too. Russia will be present, but in a capacity as diminished as its clout and constancy in Brussels and Washington.

Moscow's focus on the European market allowed China to co-opt Central Asian supplies and become an influential regional player. The Kremlin's unabated aggression surrounding Ukraine, meanwhile, is likely to intensify the EU's search for alternatives to Russian energy, while sanctions, both potential and realized, continue to bite. Russia seems to have unwittingly backed itself into a corner and has no one to blame but itself.

Casey Michel is a Bishkek-based journalist and a graduate student at Columbia University's Harriman Institute. He can be followed on Twitter at @cjcmichel.

Ukraine’s successful counteroffensive in the Kharkiv and Kherson regions means that a large chunk of the country’s Russian-speaking southeast...
opinion Artyom Shraibman

Dmitry Peskov, the man charged with sharing President Vladimir Putin's views with the rest of the world, last week denied that the Kremlin was attempting...